How does one imbue the traditional station wagon, long since out of favour, with the qualities consumers associate with other vehicles that are increasingly deemed desirable?

Subaru answered this question 23 years ago. Volvo provided its response two decades ago. Audi, in the A6 Allroad, revelled in the allure of an adjustable air suspension just prior to the dawn of the new millennium.

But with a lineup thin on utility vehicles, Volkswagen determined to use the company’s Golf SportWagen as a launching pad into the SUV-ified wagon world two years after Subaru launched its fifth Outback.

This is the 2017 Volkswagen Golf Alltrack.

With merely 1.4 additional inches of ground clearance and overall height under five feet, it’s obviously no rival for the Jeep Wrangler Unlimited Rubicon and Toyota 4Runner.

Don’t kid yourself: there’s no body-on-frame construction; no Fox internal bypass shocks. The BF Goodrich Krawlers are still at the tire store. The aftermarket lift kit? Not yet ordered.

WHAT IS IT?
Known in Volkswagen parlance as the Mk7, the current Golf is the seventh Golf in a line of Golfs that stretches back to 1974. In Canada, the Golf exists in three bodystyles: three-door hatchback (base Trendline only), five-door hatchback, and wagon.

Sprung off the SportWagen is this Alltrack model, be-cladded and elevated by less than an inch. All-wheel drive is standard equipment on the Alltrack and now optional on the two lower trim levels of the SportWagen.

Although Alltracks are available in SportWagen-aping S, SE, and SEL trim levels in the United States, Volkswagen Canada is simply positioning the Alltrack as the top-trim SportWagen, akin to the Highline model.

HOW BIG IS IT?
Bigger than the Golf you already know; substantially smaller than the Subaru Outback with which it shares a mission and is comparably priced.

Compared with a five-door Golf, the Alltrack adds 33% more cargo capacity behind the rear seats and 26% more with the seats folded thanks to an extra foot of overall length. Cabin dimensions are, predictably, virtually identical in every direction.

However, with the Outback’s 9.4 additional inches of length, the Subaru offers 11% more space for people, 17% more cargo capacity, and 10% more seats-folded capacity. For families, the 3.4 extra inches of Outback shoulder room across the rear seat and 2.5 extra inches of rear legroom will be difference makers, too.

You pay a price for the Subaru’s extra metal. Each of the four-cylinder Outback’s horsepower must cart around 20.8 pounds of Outback in the top-spec model. Each of the Golf’s 170 horses are tasked with hauling only 20.1 pounds.

DOES IT WORK?
Scribble down all the possible criticisms you could possibly level at the 2017 Volkswagen Golf Alltrack, and our experience with the car’s infotainment unit rises to the top of the list.

Known as MIB II, this tech interface isn’t the most advanced to begin with, though the option of plugging in for Android Auto or Apply CarPlay masks many of its limitations. But after a couple of days of normal operation at the beginning of its stay at GCBC Towers included a full day’s use of the navigation system, freezes, shutdowns, and slow reboots eventually became the norm. Since visiting one dealer and chronicling this story on Twitter and on TTAC, we learned from another dealer visit after the car’s stay with us that the navigation SD card appeared to be the key culprit.

This is not confidence-inspiring stuff, especially given the degree to which actual Volkswagen quality sometimes stands in stark contrast to a Volkswagen’s perceived quality. From the way the doors thunk to the nature of the materials inside, this $40,000 car feels better built than many $50,000 cars.

But is it built better? Consumer Reports ranks Volkswagen 22nd out of 29 auto brands in reliability. 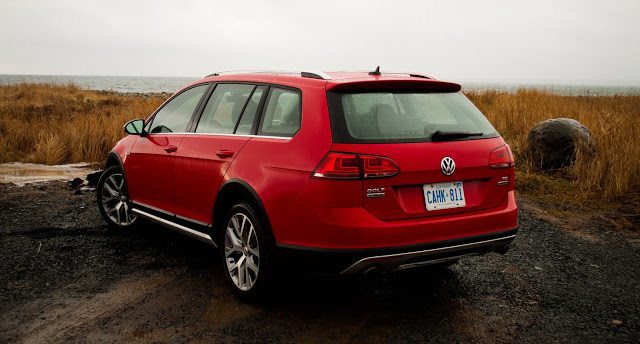 Elsewhere in the interior, space is sufficient, albeit not plentiful. It’s a wagon, sure, but it’s a compact wagon. Cabin space is naturally Golf-like, which is to say not class-leading among compacts, let alone competitive with the similarly-priced Outback. And while there’s a lot of space for stuff in the back, the ceiling is not terribly high and the floor not terribly low. A small family can go on vacation for a week, but they’ll have to think about how they pack.

If the five occupants are sized to fit in the Golf, they’ll likely be a happy bunch. The Alltrack is equipped with a panoramic sunroof, an impressive Fender-branded audio system, nicely firm seats. Like all Golfs, it’s quiet. It never rides harshly; no pothole impact is damaging.

‘;
document.getElementById(“vinads_div”).innerHTML = lfAd;
}
});
For the driver, more specifically, the Alltrack is every inch a Golf. There’s no sensation of elevation, for instance, which may disappoint the high-riding Outback driver. But it pays dividends in the handling department. As a rule, lower cars cope with cornering better, and they can maximize their handling potential without sacrificing ride quality.

The Golf Alltrack turns in quickly, grips tightly, corners relatively flat, and pulls out of the corner with all 199 lb-ft of torque presenting like 240 lb-ft. The Golf Alltrack is by no means a slow car, and the quick and smooth-shifting dual-clutch six-speed automatic exaggerates the 1.8T’s power.

With an extensive amount of slow-speed highway driving caused by very wintry conditions, the plentiful power wasn’t matched by plentiful fuel consumption. We averaged 7.6 L/100km with the 2017 Golf Alltrack over the course of 12 days with the Volkswagen.

IS ANYONE BUYING IT?
Volkswagen Canada’s sales reports don’t isolate the Alltrack portion of total Golf sales. South of the border, 1616 copies of the Golf Alltrack were sold between September and November. Applhing November’s Volkswagen USA performance – 906 total Alltrack sales, or 14% of total Golf sales – to Volkswagen Canada’s November results would produce 207 November Alltrack sales north of the border, with no promise of accuracy. 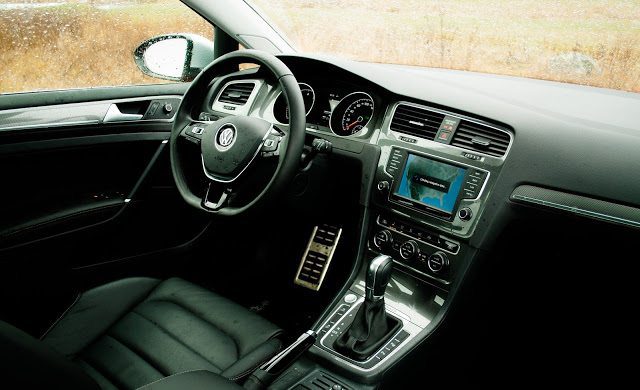 SHOULD I BUY SOMETHING ELSE INSTEAD?
Subaru’s Outback is the obvious alternative, of that there can be no doubt. Outbacks top out right around $43,000, but that price includes a six-cylinder powerplant. With more space and features (but less straight-line performance and less dynamic appeal), the four-cylinder Outback reaches just above $40,000, but starts right around $30,000.

The Volkswagen faithful may wish to wait and see what Volkswagen has in store at the North American International Auto Show in Detroit next month. A three-row Tiguan could narrow the Alltrack’s appeal.

A basic Volvo V60 doesn’t cost much more than this Golf Alltrack, there’ll soon be a new version of the Subaru Crosstrek based on the latest Impreza, and you might want to look at the most nimble compact crossovers, as well: Mazda CX-5, Ford Escape, and Subaru Forester.

Don’t forget Volkswagen has also made all-wheel drive available in the regular Golf Sportwagen for a $1500 premium in entry-level mid-grade Comfortline trim or Highline guise.

HOW MUCH SHOULD I PAY?
One way or another, you’ll have to pay a lot.

In Canada, your options for Alltrack pricing are few, at least for now. You must take the dual-clutch automatic and the equivalent of the regular Golf SportWagen’s top-tier Highline trim level. 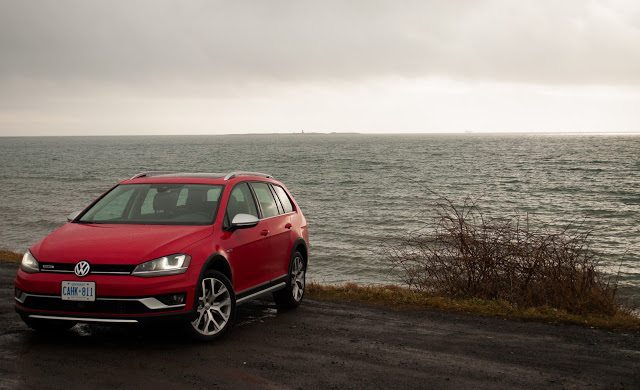 WHAT’S THE VERDICT?
Handsome styling, a sufficiently spacious interior, all-weather traction, abundant torque, decent fuel economy, luxurious content levels, exceptional ride and handling balance: these are the kinds of traits that can foster long-lasting relationships between a Volkswagen and its owner.

Yet a price that pegs the larger and more luxuriously equipped Subaru Outback as a prime competitor does the 2017 Volkswagen Golf Alltrack no favours. Indeed, the inevitable Alltrack/Outback comparison is particularly noteworthy since the 2016 Outback 2.5i Limited Tech in our family has been absolutely reliable for more than one year while the Golf Alltrack in our care last week suffered from meaningful maladies.

This is a problem for a brand that saw its sales crumble in 2016 precisely because cars weren’t operating the way they were supposed to.

Assume reliability and remove the prerequisite for Outback-like space, however, and the scales tilt very obviously in the Golf Alltrack’s direction. The wagon’s extra length and the weight of all-wheel drive don’t detract from the Golf’s distinctly superior on-road behaviour.

At its core, the 2017 Volkswagen Golf Alltrack is the Subaru Outback for the keen driver.

Timothy Cain is the founder of GoodCarBadCar.net, which obsesses over the free and frequent publication of U.S. and Canadian auto sales figures. Follow on Twitter @goodcarbadcar and on Facebook. The Golf was supplied by Volkswagen Canada’s press office.