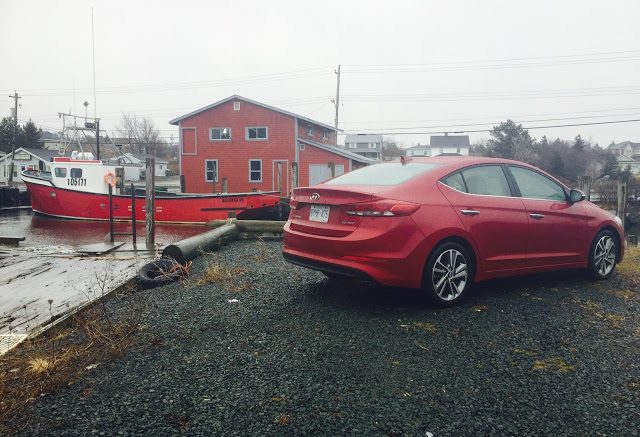 2017 Hyundai Elantra Limited Review – Sure You Want A Sonata?

As a successor to the shockingly popular but not terribly long-lasting Pony of the 1980s, the Hyundai Elantra debuted in North America for model year 1992. Now entering its 26th model year and its sixth iteration, the Elantra has long since successfully shed all remnants of negative Pony memories. The Elantra grabs more than 6% of the Canadian passenger car market – 10% in February – on behalf of Canada’s fifth-best-selling brand, earning more than one-third of Hyundai’s showroom traffic, to boot.

For this 2017 relaunch, however, Hyundai didn’t follow up their mold-breaking 2011-2016 Elantra with yet another breakthrough, look-at-me, so-new-it’s-from-tomorrow sedan.

Instead, just as Hyundai followed up their style-centric sixth-generation Sonata with a conservative redesign, the 2017 Hyundai Elantra is, while perhaps more traditionally handsome than the departing model, by no means an eye-catching new approach for compact car design.

So is this a case of Hyundai resting on its laurels? Hardly. The new 2017 Elantra is essentially better in every objective facet than the 2016 model.

WHAT IS IT?
Hyundai Canada currently markets the 2017 Elantra in six trims. The Elantra L is a manual-only model with a decent load of equipment, but for a lack of air conditioning. It’s not just a price leader – Hyundai will sell this car, but there will also be dealers who fit Elantra Ls with air-con, perhaps cruise control as well. 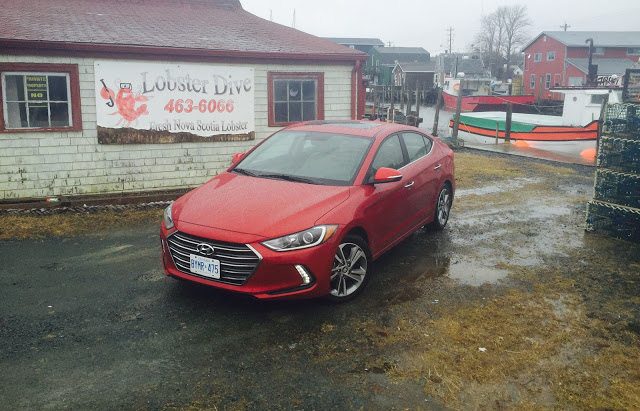 The Elantra Ultimate is a $30K+ top-of-the-line Elantra with adaptive cruise control, autonomous emergency breaking, lane departure warning, lane keep assistance, and HID headlights that reach around corners. But beneath the Ultimate and above the GLS sits this 2017 Hyundai Elantra Limited, which increases the size of the GLS’s touchscreen to eight inches, adds leather seating and a power driver’s seat with memory functions, and a thumping 8-speaker Infinity sound system.

HOW BIG IS IT?
Compared with the outgoing fifth-gen Elantra, the new car is not quite an inch longer, a full inch wider, and two-tenths of an inch lower. Cargo volume is down by nearly 3%, passenger volume is marginally increased, rear legroom is up – officially – by 2.6 inches.

Canada’s best-selling car and the Elantra’s prime competitor, the 2016 Honda Civic, is 2.4 inches longer than the Elantra, identically wide, and nearly an inch lower. The Civic’s offers 2% more space for people; 5% more space for luggage.

DOES IT WORK?
It’s been years since mainstream car buyers complained that compact cars were penalty boxes on long highway journeys. For the most part, even modern subcompact cars are livable environments on highway trips.

But when the need suddenly arose for a 350-kilometre round-trip trek from GCBC Towers in Eastern Passage to the blueberry capital of the world, Oxford, Nova Scotia, we nevertheless thought nothing of hopping in a new Elantra that had just been delivered to our driveway, rather than driving our own Honda Odyssey. We had driven my mother’s fourth-generation Elantra to Boston (empty) and back (loaded with IKEA goods), and we also know my mother-in-law’s fifth-generation rather well.

Yet In terms of highway ride comfort, a quiet and serene and well-built cabin, straight and true tracking, and luxury features, the sixth-generation Elantra is a leap forward. No, the new car doesn’t look astoundingly new – the stylistic difference between the two prior Elantras was massive. But spending time with this 2017 Elantra reveals the lengths to which Hyundai went in order to make the Elantra a paragon of refinement relative to its direct competitors.

A stiffer structure allowed Hyundai to focus more clearly on the Elantra’s pothole isolation, and Hyundai clearly made that their focus. The 2017 Elantra trades fun for comfort. There’s no quick and decisive turn-in, no great sense of nimble back country juking and jiving, no joy derived from hustling the Elantra up and down on-ramps and off-ramps.

The drive mode selector adjusts throttle response and steering weight as a unit. Eco’s throttle response is somewhat lackluster but the steering is appropriately weighted. Normal is acceptable, but for unnecessarily weighty steering. Sport’s willingness to hold a gear is nice, but the steering becomes comically and unnaturally heavy. In no mode is the 2017 Elantra a pure driver’s machine, which is great for hundreds of thousands of Canadian compact car buyers who choose every year to not buy a Mazda 3.

Hyundai USA is already offering the Elantra Eco with a 1.4L turbo and a seven-speed dual-clutch, but that powertrain is not presently in Hyundai Canada’s lineup. Although the 147-horsepower 2.0L is perfectly adequate, the notion of a $27K+ Elantra without an engine upgrade is a tough pill to swallow, particularly as there’s no manual transmission availability. The 2.0L is generally smooth and quiet but becomes buzzy under hard acceleration and coarse above 4000 rpm. Fortunately, it’s linked to an intelligent 6-speed automatic, not an awkward CVT as in so many rivals.

Hyundai made its name on value, and even a high-priced Elantra stuns with its long list of standard features. Though lacking Apple CarPlay for compatibility with our iPhones (there is Android Auto) Hyundai’s built-in infotainment unit is quick and intuitive; the navigation system provides clear and concise instructions with slick pinching and zooming. In a Toyota Corolla, some of the items standard on this Elantra Limited (heated rear seats, heated steering wheel, 8-speaker upgraded audio, blind-spot monitoring) aren’t available at any price, nor is the Corolla’s cabin as pleasing to look at or equipped with materials of this quality.

At least in this leather-equipped Elantra Limited, Hyundai’s anchors for child seat installation are difficult to access, and kids won’t be able to see much over the high beltline. Rear seat space is plentiful, however, and only four-way lumbar support (not the Elantra’s two-way) would improve the situation for the driver.

IS ANYONE BUYING IT?
In each of the last five years, the Hyundai Elantra was Canada’s second-best-selling car. In February 2016, the Elantra was, in fact, Canada’s best-selling car overall, propelled along by the clear-out of remaining fifth-gen cars and the arrival of the new 2017 model tested here.

South of the border, U.S. sales of the Elantra climbed in 2015 to the second-highest level in the nameplate’s history. The Elantra was America’s seventh-best-selling car last year. Through the first two months of 2016 – the transition period for the Elantra – sales plunged 22%, a trend not likely to hold for many more months. 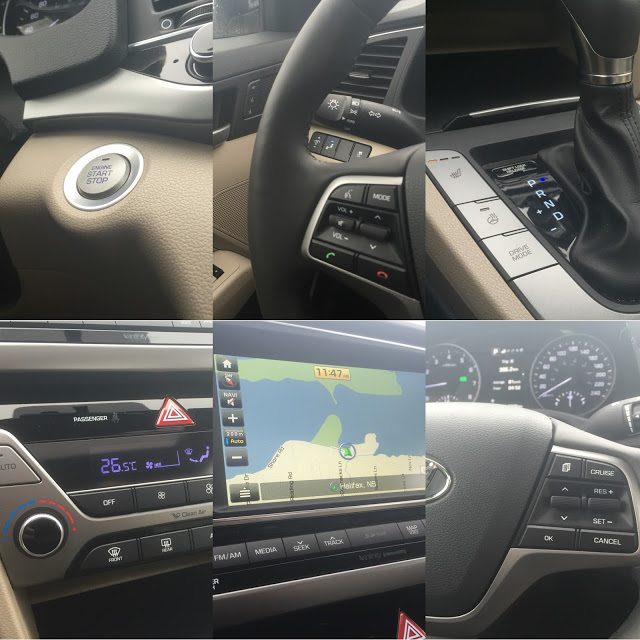 SHOULD I BUY SOMETHING ELSE INSTEAD?
If driving enjoyment is a major factor, if you like to periodically push your compact commuter closer to its limits, if you believe autonomous cars will eventually come between your man-machine connection, then yes, you should probably buy something else. The 2017 Hyundai Elantra is a thoroughly refined and quiet car, but it’s no party animal.

Keen drivers will prefer the balance of Honda’s latest Civic, the interactive chassis of the Mazda 3, or the Euro-like dynamics of the Ford Focus and Volkswagen Golf.

HOW MUCH SHOULD I PAY?
We are gradually becoming accustomed to luxuriously equipped mainstream compacts at premium price points, but it’s still a difficult concept to fully grasp. Consumers who are increasingly satisfied with the spacious cabins of compact cars, plus their lower price tags and better fuel economy, are content to load up these compact cars with equipment that place them smack in the middle of the midsize sedan sector. This $27,944 Elantra Limited isn’t the most expensive Elantra – you could spend $30,494 on an Ultimate – but it’s $1400 more than the price of a basic, rather handsomely equipped Hyundai Sonata GL.

If that makes you uncomfortable, consider the 2017 Hyundai Elantra GLS, which Hyundai Canada prices at $24,394. The GLS includes a sunroof, keyless access, 17-inch alloys, blind spot monitoring, and heated seats in all four corners. But if you want a manual transmission, you’ll have to stick with the $17,694 Elantra L. Heated front seats? Yes. Keyless entry? Yes. Air conditioning? No.

Indeed, but for the Elantra’s buzziness under acceleration, some high-rpm coarseness, and the narrower rear seat, one wonders if there’s much point stepping up to the Sonata.

Timothy Cain is the founder of GoodCarBadCar.net, which obsesses over the free and frequent publication of U.S. and Canadian auto sales figures. Follow on Twitter @goodcarbadcar and on Facebook. The Elantra was supplied by Hyundai Canada’s press office.