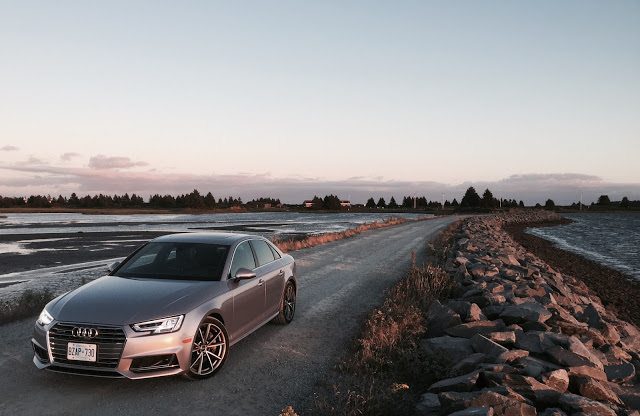 Audi knows when its cars look good. And Audi doesn’t mess with success.

Say what you will about the need for automakers to inform consumers that the newest, flashiest, hottest item is now available, but evolutionary design has worked for some rather successful models in the past.

Consider, for example, the Porsche 911, which has enjoyed a handful of bumper and door handle alterations over the decades but still looks the same as the 911 of the late 1960s.

Porsche Canada set a 911 sales record in calendar year 2015 and is on track to break that record in 2016. The strategy’s working.

Over at Audi, which like Porsche is a Volkswagen brand, the fifth-generation 2017 Audi A4 won’t be easy to differentiate from the 2015 model your neighbour grabbed off LeaseBusters for a song last week. But don’t allow yourself to believe the old A4 and new A4, so similar on the outside, are identical under the skin.

WHAT IS IT?
At one time the entry point to the Audi range and the brand’s best seller, the A4 no longer fills either of those roles. The Q5 crossover is easily Audi’s top seller, while the A3 – $5600 less in Quattro form – is Audi’s base sedan in North America. 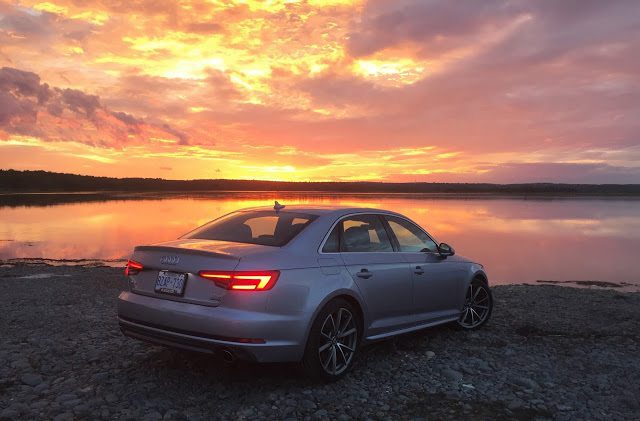 (In fact, the Q3 crossover is even less expensive than the A3. And in many markets, Audi also sells an A1 and a Q2.)

Audi began marketing the first A4 in 1995, the second in 2001, the third in 2005, and the fourth for a long run beginning in 2008. Though still appealing, that car was suffering from advanced age – a new A4 was deemed vital for Audi’s passenger car success around the world. Underpinning the 2017 Audi A4 is Volkswagen Group’s MLBevo platform that already provides the foundation for the second-generation Audi Q7.

HOW BIG IS IT?
A whole lot bigger than it used to be, but the new A4 is still a surprisingly tight car inside. The 2017 Audi A4 is eight inches longer than the 1997 Audi A4 (with a commensurate increase in the length of the wheelbase) and four inches wider. But there’s only 5% more passenger volume in this A4 than there was 20 years ago. 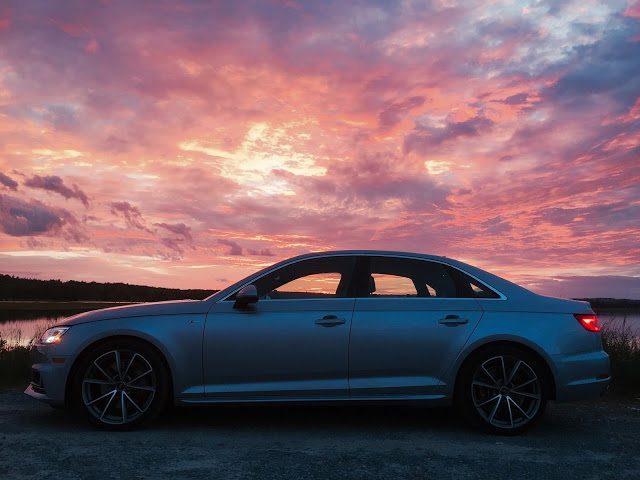 DOES IT WORK?
On a ten-minute test drive with a sales consultant yammering away in your ear, it’s easy to be impressed by the new A4’s off-the-line pull, the material quality and assembly, and the new car’s reduced noise, vibration, and harshness. But it’s more difficult to take note of a car’s niggling issues, the minor flaws that you’ll regret regret not noticing when you signed on the dotted line.

That’s where car reviewers come in, or at least where they should come in. I spent a week driving the 2017 Audi A4, and I can (and will) discuss at length its winning characteristics. But Audi can do that, too. So can your local Audi dealer’s sales consultant. In fact, since you are interested in the car, you can likely do so, too. Positivity is the easy part: it’s 2016, cars are nice. Expensive cars are especially nice.

But you won’t possibly think highly of the 2017 Audi A4’s shifter, which possesses no real detents and needs to be thumbed into park via a separate button. Parallel parking in three or five points seemed to always result in the car being in neutral rather than reverse. In the long run, it’s minor, and you’ll get used to it. Maybe.

‘;
document.getElementById(“vinads_div”).innerHTML = lfAd;
}
});
The new A4 also does an exceptional job of silencing wind and road noise, but that opens up an avenue for engine clatter, diesely engine clatter, to make its way into the cabin. Rarely does the 2.0T sound pleasant. The engine noise is by no means alarming or obnoxious, but you will notice this minor fault in Audi’s NVH work.

The rear seat’s centre hump is massive, and for such a lengthy car, the rear seat lacks real space overall, a common complaint in this class. The trunk is vast and properly shaped, however, so you won’t have trouble taking four people and their stuff on a trip. But five?

With Audi Drive Select in Comfort mode and the transmission in D, the dual-clutch automatic is reluctant to provide much in the way of throttle response from rest. Perched on a slope, perpendicular to traffic, betwixt corners on a high-speed road? You better goose the throttle, because a quarter-inch of travel gets you nothing otherwise. Or change the drive modes.

Everything about Audi’s MMI is user-friendly, enough to negate the need for a plug-in-only and rather limited Apple CarPlay. (CarPlay is great, but it’s not all things to all people all the time.) But why does the volume knob, conveniently located on the centre console, have to be so far away from the MMI controller, aft even of the shifter? It’s an awkward arm bend away.

These are the kinds of “faults” that jump out during a week with the 2017 Audi A4 Quattro 2.0T precisely because the car is so composed, so comfortable, so technologically advanced, so refined, quick, and quiet.

Not historically considered a dynamic tour de force, the new A4 both rides and handles better than before. It’s still not a feelsome and interactive machine, but the 2017 A4 is a more competent corner carver while, at the same time, able to traverse rough pavement with greater alacrity. Brake feel is much improved, steering weight and directness (in comfort mode) is more natural, and the 252-horsepower 2.0L turbocharged four-cylinder provides loads of mid-range punch, helped along by a dual-clutch that can snap off downshifts in a flash.

Cabin comfort is better, too, particularly with our car’s sport seats. The bolstering isn’t what you’ll find in an RS model, but the seats nicely blend comfort with stability.

We expect high levels of build quality in Audis, and the A4 is certainly no slouch. It’s in the way the steering wheel stalks move, the climate control knobs twirl, and the cross cabin vents slide. The workmanship befits the $60,285 price point.

The pervasive sense of quality won’t win headlines. That’s where Audi’s customizable virtual cockpit steps in. Besides all the safety gear we’ve come to expect in heavily-optioned luxury cars, Google Earth in the middle of your gauge cluster is the item that will most impress your friends. Not only is the system attractive to look at, it’s quick to transition between modes, just like the centre screen above the dash. That centre screen doesn’t tuck away, mind you, but it feels and looks much more expensive than the unit in Mercedes-Benz’s C-Class.

IS ANYONE BUYING IT?
Despite its advanced age and the luxury market’s turn toward utility vehicles, Canadian sales of the Audi A4 held up well coming out of the recession. More than 6000 A4s were sold in Canada in 2012, and sales only fell to 5461 in 2015, the outgoing A4’s last full year on sale. South of the border, U.S. volume rose to a five-year high in 2013 and didn’t suffer a sharp drop until last year.

SHOULD I BUY SOMETHING ELSE INSTEAD?
There’s no shortage of options, and each candidate has an area in which they excel. The BMW 3-Series, Cadillac ATS, and Jaguar XE are dynamic standouts. The Mercedes-Benz C300 is currently North America’s top-selling premium brand car in large part due to its hi-lux, mini-S-Class interior. The Infiniti Q50 plays a high-style, high-value card. Lexus caters to believers in the brand’s reputation for supreme reliability.

The 2017 Audi A4, we would argue, excels in every aspect. Does the A4 offer a class-leading interior, ATS-besting handling, or the interior ambience of the C-Class? Not quite. But there are simply no letdowns with this car. It’s very good in very many ways. 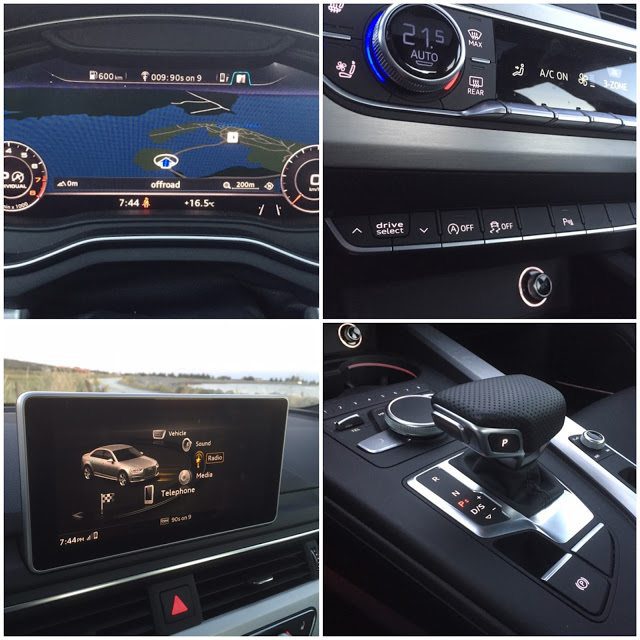 HOW MUCH SHOULD I PAY?
At $60,285, our specific 2017 Audi A4 test specimen was priced deep into Audi S4 territory. Though there are features on this car that wouldn’t be fitted to a similarly priced version of upcoming S4, $60,285 nevertheless seems like too far a reach for the A4 line, particularly since you can step into a larger Audi A6 for roughly $60,000, as well.

We suggest a mid-range 2017 Audi A4 Quattro Progressiv with the sport package (for fun)  the driver assistance package (you’ll want it for resale), and heated rear seats (for winter) for $53,145. Without the S line and 19-inch wheels the new A4 appears to ride too high, looking more like a stodgy rival for the Lexus ES than Mercedes-Benz C300 competitor.

WHAT’S THE VERDICT?
The new vehicle market is littered with vehicles that do some things very well and other things very poorly. A Subaru BRZ, for example, is a genuine sports car, but it sucks as a family car. The Jeep Wrangler excels when the going gets rough – and it’ll do so in top-down fashion – but don’t expect capable cornering. The Chevrolet Spark we tested in August was among the most budget-conscious cars on sale in North America, and it was even quiet and refined. But it was brutal to actually, you know, drive.

The modern luxury sports sedan must be many things to many people. A family sedan? Yes. A luxurious sedan? For sure. A sports car? Little bit of that, too.

The 2017 Audi A4 adopts the mission of its segment, but it does so with greater success than its chief rivals. The A4’s interior is too good, its ride and handling balance too precise, the exterior treatment too classy, and the powertrain too effective for competitors to measure up. All of them do something better than the new Audi A4. None of them do so many things so well.

Timothy Cain is the founder of GoodCarBadCar.net, which obsesses over the free and frequent publication of U.S. and Canadian auto sales figures. Follow on Twitter @goodcarbadcar and on Facebook. The A4 was supplied by Audi Canada’s press office.