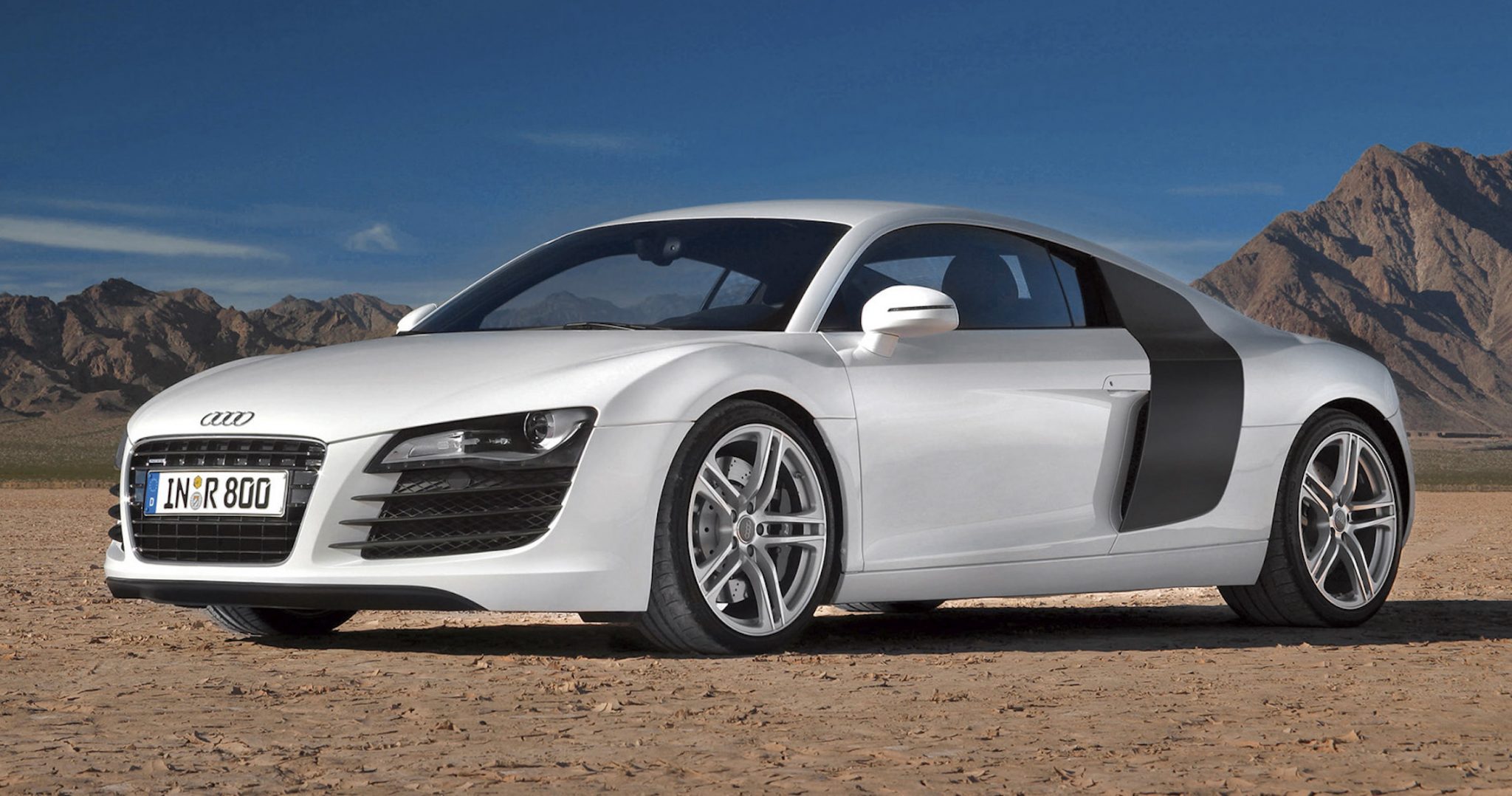 Audi is an automaker with one of the richest histories in the world. In recent decades, the Ingolstadt brand has established itself as one of the most reputable premium firms on the market, thanks to equal parts of fast and luxurious cars, and unique technical solutions such as the quattro all-wheel-drive system.

But beyond exclusive sedans and SUVs that make up the current lineup of the German brand, the myth of Audi has been carved out because of its perfect balance between sportiness and elegance.

The first years of Audi’s life were somewhat turbulent. However, after a period of uncertainty after World War II, Volkswagen finally took over all of Auto Unión’s stakes in the mid-1960s to take advantage of the knowledge of firms like NSU in its future product line.

The first model of the brand’s current stage, which is over 50 years old, was born (Audi 100). So without further ado, these are Audi’s most iconic cars.

Developed by Chief Engineer Dr. Ludwig Kraus in 1968, this model first introduced Audi to the competitive upper-middle-class market segment, and the Audi 100 soon became a bestseller.

In 1965 Ludwig Kraus wanted to expand the lineup of vehicles offered by Audi and saw the introduction of a model in the executive segment as the only way to keep the brand afloat.

The success of the 100 model was such that Audi sold over 800,000 units of the first series were sold, and, quickly, the capacity of the Ingolstadt plant reached its limit.

The highlights of the Audi 100 included a drag coefficient that became the benchmark in its segment: the first fully galvanized bodywork in an upper-class sedan and the Quattro permanent all-wheel-drive system. Under the bonnet, the Audi 100 had a 1.8 4-cylinder engine that produced 100 horsepower.

It’s almost impossible that you have never heard of the following member on our list. In 1980, Audi brought the Quattro to the Geneva Motor Show, which wasn’t just any car.

After over 40 years, it’s considered a revolutionary model within the Ingolstadt manufacturer. Moreover, the technology that debuted this fascinating coupe has extended to practically the entire brand’s current lineup, including the e-tron.

The Quattro came equipped with Audi’s innovative all-wheel-drive system and a 2.1-liter; inline-5-cylinder turbocharged engine capable of delivering 203 horsepower. This was the first time a passenger car had adopted this powertrain solution and made it one of the most exciting sports cars on the market back then.

The contribution of the Quattro to the world of competition is unquestionable by introducing Audi’s all-wheel-drive to the World Rally Championship, which soon after was adopted by its fiercest rivals.

The Audi Sport Quattro S1 E2 was one of the most iconic cars in the history of motorsport. It was nicknamed by racing drivers as “The Monster.”

The Sport Quattro S1 is the ultimate expression of how demanding and brutal Group B Rally was. The car had so much power and torque; it was almost impossible to keep it in a straight line, as the chassis couldn’t handle it.

Introduced in 1984 as an evolution of the Audi Quattro, the Sport Quattro S1 had the same 2.1-liter inline five-cylinder engine. It produced 450 horsepower and 354 pound-feet of torque, although many claimed it reached 500 horsepower.

To keep the car as close to the ground as possible, Audi installed a complete body kit with a massive rear wing to increase downforce. As a result, the car could go from 0 to 60 mph in just 3.1 seconds. In the fateful 1986 Group B Rally season, the last units to leave the factory produced over 600 horsepower.

The V8 is an unknown but exciting car. This was Audi’s first car in the most luxury sedan segment.

After two unsuccessful attempts with the 200 and 200 C3, both based on the Audi 100, the V8 was the third evolution of this concept. The fundamental characteristic of the V8 was the elimination of the small engines of the 200. Instead, Audi went from powers of between 136 and 220 horses to bet on large and more powerful 3.6 and 4.2-liter 8-cylinder engines.

The most potent engine, the 4.2-liter, produced 280 horsepower and 295 pound-feet of torque, accelerating from 0 to 60 in 7.7 seconds with the automatic transmission and 6.8 seconds with the six-speed manual gearbox.

It isn’t easy to replace such an iconic model as the Audi Quattro. Audi proved this in 1990 when they had to continue the successful Quattro that had served as the basis for the Group B rally.

Based on the Audi 80/90 coupe, the S2 came with a 5-cylinder 2.2-liter turbo engine from the Audi 200. It had 20 valves, double-overhead cams, and 220 horsepower. From the Audi V8, it inherited the grille, on which appeared the small badge with the initials S2, which in Audi is equivalent to the M in BMW.

Aesthetically, it was aggressive, but its handling (mainly because of softer suspension) focused more on comfort than performance. So, it was closer to a GT than a genuine sports car.

Its engine had relatively quiet behavior, punished by the weight and gear ratios, with a gearbox considered too slow for a sports coupe, although it had a high top speed of 153 mph.

When it hit the market in 1994, it was the world’s fastest station wagon and the first Audi car to top 155 mph. But, of course, we’re talking about the Audi RS2 Avant. Developed in a joint venture by Audi and Porsche, this model became a myth of the 90s.

The reason for both companies to collaborate (since they were not yet part of the same group): Audi wanted to compete with the BMW M3, which had no competition then. And Porsche wasn’t going through very buoyant times, so this stage in its history is known for its frequent projects for other motor companies.

Audi provided the body – the chassis of the 80 Avant – and added components. Porsche took care of the rest, starting with a 2.2-liter inline-five engine that delivered 315 horsepower a torque of 302 pounds. The RS2 Avant went from 0 to 60 mph in an impressive 5.4 seconds.

In 1998, the first TT arrived from Audi with its simple, rounded shapes, an attractive drop from the roof, and a pleasant silhouette. A coupe that didn’t fall into the sharp lines or aggressiveness of the sports coupe segment.

Developed on the Volkswagen Golf IV platform, the standard versions of the Audi TT boasted a 1.8 turbo engine with 180 or 225 horsepower, and in both cases, with an optional quattro all-wheel drive system. For eight years, it was also available with a roadster body.

The TT was also the first car marketed worldwide to have the DSG gearbox. Before, but only on the German market, it was the fourth generation Volkswagen Golf R32.

Audi’s RS4 B7 was born in 2006, at a time of bonanza for this type of vehicle now almost lost thanks to the SUV hype. Fortunately, every edition of the RS4 has excelled in many categories, more specifically in cornering and slippery surfaces, including snow. This is where the racing pedigree of the RS4 in rallying shows makes us forget about SUVs for a bit.

I like several things about the Audi RS4 B7, starting with the elegant, widened body design and one of the best wheel designs I’ve ever seen. In addition, the boosted sedan concept has always fascinated me, especially the RS4 with its naturally aspirated 4.2-liter V8 with 420 horsepower and 317 pound-feet of torque. All this mated to a six-speed manual gearbox.

Another highlight of this car is bucket seats, which stress the car’s sporty and racing character and keep the occupants in place when turning at high speeds.

The Audi A1 Quattro is the top of the range of this little car from Ingolstadt. It features a 2.0 TFSI 4-cylinder turbo direct injection engine that develops a whopping 256 horsepower at 6,000 RPM and 258 pound-feet of torque, paired with a six-speed manual transmission.

The suspension – a McPherson type on the front axle and four-link on the rear axle – is firmer than the rest of the A1 range. This tiny sports car also has an electronic differential and an ESP with sports mode activated on demand.

Aesthetically, it stands out for a very muscular body and is only available in Glacier White color with a gloss black roof.

Thanks to its 2-liter TFSI (and the quattro system that hides under its skin), the A1 can accelerate from 0 to 60 mph in 5.7 seconds and reach 152 mph.

Impossible. This is what the idea of ​​Audi building a mid-engine sports car sounded like. It was a design far removed from Audi’s subtle lines and boasted a performance that could match the best in the business. But they were wrong. Audi made the impossible possible, and the first-generation R8 showed that Audi could create a brilliant sports car and show the world it could also be a car for everyday life.

When we first met the R8 in 2007, it held one of the best engines Audi has ever made hidden under its rear hood. A naturally aspirated 4.2 V8 of 420 horsepower and 317 pound-feet of torque from the RS4.