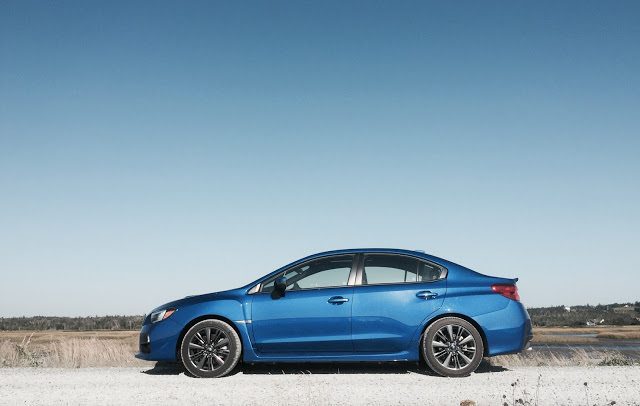 2016 Subaru WRX Review – Never Ceases To Be What It Is

Surely this can’t be relevant. Loathe am I to even broach the subject, so off-topic is the conclusion. It’s hard for me to believe you could even take an interst. I find it difficult to accept that you’re remotely curious about our findings.

But yes, the 2016 Subaru WRX is really quite fuel efficient.

Yes, I know that you care about the WRX’s laptimes. According to test results from Car & Driver, the 2016 WRX completes a lap Virginia International Raceway’s 6.6 kilometre circuit in three minutes and 15 seconds, quicker than the 2015 Ford Mustang EcoBoost. You care that the WRX accelerates to 100 kmh in five seconds flat. You care that the 2016 WRX generates 18% more horsepower than the first WRX North Americans were permitted to buy. You’d rather talk about the stickiness of the WRX’s Dunlop Sport Maxx RT tires, the surprisingly communicative steering, and the brilliance of Subaru’s all-wheel-drive system.

Yet, while enthusiastically driving a few hundred kilometres over the course of a week in the 2016 Subaru WRX – 40% urban, 60% highway – the WRX’s onboard computer claimed consumption of just 7.8 L/100km, equal to 30 miles per gallon on the U.S. scale; 36 Imperial miles per gallon. Scarcely believable though the claim may be, the fuel pumps at our local Irving confirmed the car’s reading.

Officially, in ideal circumstances, the 2016 WRX is rated at 8.4 L/100km. The EPA pegs the highway economy at 27 mpg. Had we driven sedately; had we driven only on the highway and only at the posted limit; had we short-shifted in perpetuity, perhaps then this wouldn’t be worthy of mention. 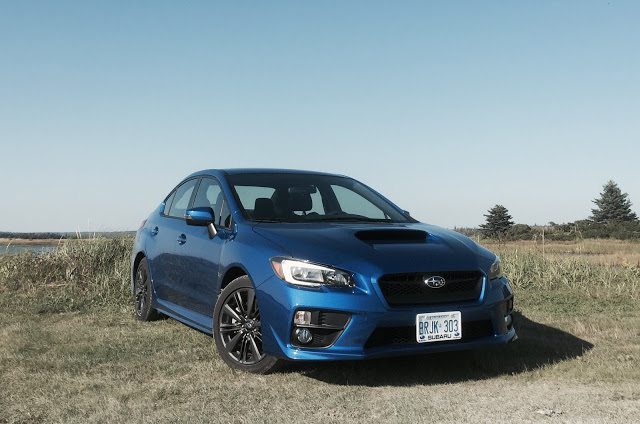 But the WRX doesn’t take kindly to sedate driving. Our lifestyle demands plenty of urban driving. I liked the sound generated by the WRX when, rather than shifting up, we approached the redline together. And in those circumstances, the Impreza consumed only 7.8 litres of premium fuel every 100 kilometres.

Is the WRX simply a more efficient car than the EPA testing procedure suggests? 27 owners at Fuelly.com are averaging a very impressive 25 mpg in 2016 models. Or did our WRX tester consume such a small amount of fuel because we carried all our speed through corners, negating the need for acceleration?

Who cares? It was a miser. Enough said.

WHAT IS IT?
In order to compete in FIA’s World Rally Championship, manufacturers need to race relatively unaltered road cars. Audi brought all-wheel-drive to rallying in the 80s, but Subaru and Mitsubishi made big names for themselves by racing turbocharged, all-wheel-drive versions of their everyday small cars.

At Mitsubishi, the road car version of the rally car became known as the Lancer Evolution. The road-going version of Subaru’s rally car operated under the Impreza WRX banner. The first generation of the WRX, including many a special edition, wasn’t sold on this side of the Pacific. But beginning with the bug-eyed second-generation Impreza in model year 2002, the WRX was very successfully marketed in North America to a generation who had become addicted to the forbidden fruit while playing Polyphony Digital’s Gran Turismo video game.

Two generations later, the WRX is more easily distinguished from the Impreza – Subaru wants you to believe it’s a completely different model altogether – and the highest-performing WRX, the STI, isn’t as closely linked with the brand’s rallying heritage, either.

Our test car is a 2016 model, which features an updated infotainment system and more available safety features than the 2015 WRX. In Canada, the base 2016 Subaru WRX costs $2800 less than this Sport Package car. This WRX is no sportier than the basic model, however, as the extra features pertain to safety (blind spot monitoring, lane change assist, rear cross traffic alert) and creature comforts (sunroof, power driver’s seat, welcome lighting.) WRX fans will also note that the Sport Package car has a very low profile trunklid spoiler and more LED lighting.

In order to gain features like navigation, proximity access and push-button start, and leather seating, you’ll need to fork out another $3300 for the WRX Sport-tech Package. The WRX Sport-tech also includes bigger wheels and tires as well as special KYB struts at the front with, says Subaru, forged aluminum lower suspension arms.

Across the WRX lineup, the optional transmission is a $1300 continuously variable unit that surely can’t be remotely as fun as operating a WRX with the 6-speed manual. CVT-equipped WRXs even have a lower redline.

HOW BIG IS IT?
There’s no denying that the 2016 Subaru WRX, the fourth generation of the Impreza-related, rally-car-derived, gravel road monster is a compact car. We stuffed two adults and a child seat in the back for 100 kilometres with no issues, but that’s not to say the cabin is cavernous. There’s a centre hump in the footwell that interferes with the middle occupant’s comfort.

But the 181-inch-long WRX is structured very differently compared with other cars that make performance their main goal. The sixth-generation Ford Mustang, for example, offers 251 fewer litres of passenger volume than this WRX, and the volume available in the Mustang isn’t nearly as useable or flexible. Compared with Subaru’s own BRZ sports car, the WRX is 14 inches longer and 625 pounds heavier. The WRX could, in theory, be a family car. The BRZ? Well, it’s been done, but it’s not advisable.

More directly comparable, perhaps, are cars like the Honda Civic Si sedan, which is a couple inches shorter than the WRX, bumper to bumper, provides an interior that feels marginally more spacious, and has a slightly larger trunk.

In prior generations, the WRX was sold in hatchback and sedan configurations. The last WRX hatchback’s cargo area was 58% larger than this WRX sedan’s even though the car was seven inches shorter.

DOES IT WORK?
As an athletic means of transportation, the WRX verges on the magical. It’s not that the speed produced is so outrageous, but rather the level at which the WRX wants its driver to play. Go go go. Turn turn turn. Faster faster faster. Quicker shifts. Firmer inputs. Brake harder. Turn in more abruptly. Add throttle sooner. Add more throttle sooner.

From the first press of the clutch to the first shift to the first prod of the throttle, it’s abundantly clear that the WRX is not particularly keen on a relaxed trip to the store.

Mixed in with the WRX’s sharp steering, gem of an engine, and never-ending grip is a dreadfully noisy cabin, a transmission geared for on-ramp shenanigans and not the highway, and a firm ride.

In a sense, the ride quality is less of an issue than you’d expect. From the hit of turbocharged power at 3000 rpm and the sometimes disagreeable shift/clutch action and the all-encompassing noise of the car, you’d expect the WRX to crash through potholes and smash over expansion joints. It doesn’t. But it is firm. Always firm. Always reminding you that, “Hey, I’m firm.” 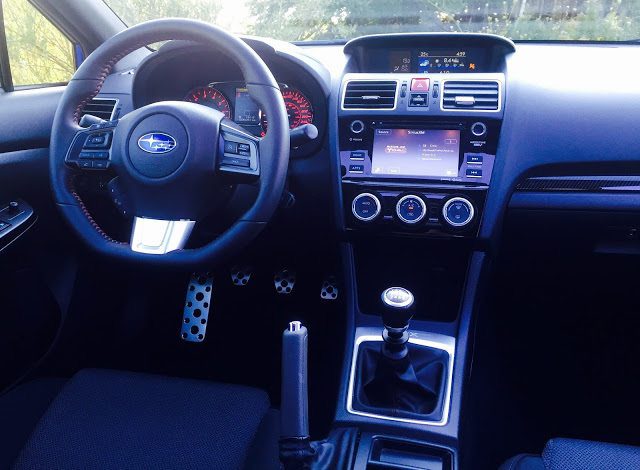 If there is one chief reason some potential consumers will turn away, however, it is the amount of road noise entering the cabin. Gravel picked up by the WRX’s sticky tires sprays the undercarriage, announcing every individual piece of rock like a murder of crows greeting you before sunrise on a Saturday in July. The engine thrums irritatingly on the highway, somehow making the use of the stereo more of an additional irritant than a suitable coverup.

Together with an overall lack of Germanic refinement, the 2016 Subaru WRX constantly clarifies its station in life. It is here not to tickle your periodic performance fancy, but to always alert you to the fact that the road just opened up in front of you; there’s an S-bend coming up soon; you’ll want to get just a little bit sideways around the next town’s roundabout.

IS ANYONE BUYING IT?
Through the first eight months of 2015, Canadians registered 11% more WRXs and STIs than during the same period last year. Quickly becoming a key element for the surging Subaru brand and not just a car with niche appeal, the WRX/STI tandem produced a 32% year-over-year U.S. sales increase in 2013, a 42% improvement in 2014, and is following up that increase with a 32% jump through the first eight months of 2015.

Compared with rivals like the Volkswagen Golf GTI/Golf R, the WRX and STI have sold nearly 5000 more copies already this year in the U.S. and a couple hundred more in Canada. 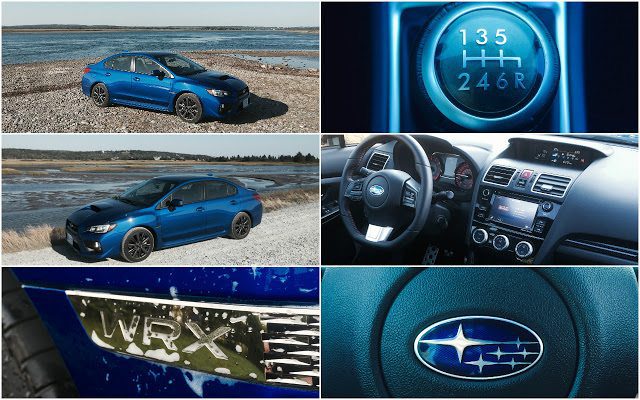 SHOULD I BUY SOMETHING ELSE INSTEAD?
Three prime alternatives come to mind. If you like everything about the WRX but just want more of it, Subaru’s own WRX STI is the answer. But pricing for the 2016 WRX STI starts just under $40,000 in Canada, and straight line performance stats suggest the 305-horsepower STI is only the faster car through the corners.

Ford’s Focus ST, soon to be joined by the STI-fighting Focus RS, is a front-wheel-drive hot hatch with much of the WRX’s edgy dynamics and a hatchback bodystyle. A liftgate used to be a big part of the WRX’s appeal, but Subaru now builds the WRX and STI as sedans only.

If you can tolerate less power and slightly less outright precision, the front-wheel-drive Volkswagen Golf GTI and the more costly, all-wheel-drive Golf R are still hugely fun to drive. More usefully, the Golf GTI takes quality and content and refinement up a few notches or more. The Golf GTI is a performance car, albeit not as blatantly performance-oriented as the WRX. But added to the GTI’s performance car status is its knack for being a genuinely terrific car in virtually every other way.

HOW MUCH SHOULD I PAY?
A heavily-equipped WRX begins to reach dangerously close to the even higher-performing Subaru WRX STI, pricing for which begins just $1900 north of the most costly WRX. This WRX tester, fitted with the $2800 Sport Package, is much more tolerably priced.

For the truly value conscious, however, the basic 2016 Subaru WRX with a manual transmission is advertised as a $29,995 car – $31,645 including fees – and makes even more sense. It’s not simply about our desire that you pinch pennies. Rather, no matter what you do, the WRX doesn’t turn into a convincing premium car by adding extra equipment. It’s a sports sedan, and if the Sport Pack’s sunroof, power driver’s seat, and LED lighting won’t turn it into a luxurious sports sedan, why bother?

WHAT’S THE VERDICT?
Buyers looking for a true performance car, not just a quicker version of a conventional small car, will find true joy in the WRX. But there are penalties to be paid and sacrifices to be made if you’re to live with the WRX as your sole daily driver.

New car buyers who wish to consistently be made aware of their car’s desire to go faster, brake harder, and turn more sharply will find in the WRX an all-weather all-rounder. New car buyers who aren’t fully committed to the cause are more likely to derive from the WRX almost as much frustration as pleasure.

Timothy Cain is the founder of GoodCarBadCar.net, which obsesses over the free and frequent publication of U.S. and Canadian auto sales figures. Follow on Twitter @goodcarbadcar and on Facebook. The WRX was supplied by Subaru Canada’s press office.