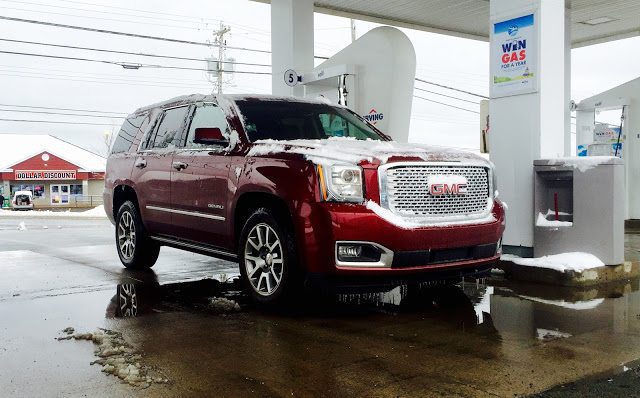 This 2016 GMC Yukon Denali, equipped with the same 6.2L V8 – 420 horsepower and 460 lb-ft of torque – and the same 8-speed automatic, was slightly thirstier at 14.2 L/100km, equal to 16.6 mpg. But this time, rather than a warm week in August (as in the Sierra) or a late autumn week in December (as in the Escalade), we were enveloped in the chill of early March. And unlike the Escalade’s highway-centric test, much of our time in the Yukon Denali was spent in urban environments.

Much of what applied to that 2015 Yukon Denali applies here. It’s an appealing vehicle with an imposing front end, abundant power across the rev range, running boards which quickly glide out to meet your toes, a supremely comfortable driving position, and simple controls. (The 2016 Yukon Denali has Apple CarPlay, too.)

At the same time, the elevated rear load floor is far too high even for moderately athletic large dogs to jump in. Second row knee room is surprisingly limited. Third row access is difficult and there’s no comfort to speak of back there.

Plus, at CAD $85,510, the Yukon Denali’s 8-speed-sourced fuel economy benefits aren’t a huge factor when it comes to the wallet of a new GMC owner, (although even wealthier SUV buyers prefer to spend less than more on fuel.) The key upgrade with this 2016 model doesn’t relate to any update for the 2016 model year, either, nor does it cost money. In fact, the reason this 2016 Yukon Denali is superior to the 2015 model we drove in January 2015 is a money-saving feature.

Gone are the optional 22-inch alloys, which lopped $545 onto the price of last year’s Yukon Denali and now can’t be had for less than $1725. Gone, too, is any complaint of choppiness which could justifiably be levied against the Yukon Denali or the Escalade we tested late last year. Yes, with magnetic ride control and a long wheelbase, there’s an unmistakable smoothness about those 22-inch-shod GM SUVs, but there’s also an underlying sense of, “This could be better.”

Blingier? Sadly no. It’ll be obvious to all onlookers that the owner of this Yukon Denali didn’t tick off the must-tick boxes. Twentys? My, how the wheelwells gape, searching for more metal and rubber.

But never does the Yukon Denali on 20-inch wheels cause its occupants to think that a 5800-pound 8-seater with a 116-inch wheelbase should do a better job of absorbing pavement imperfections, that it should further isolate its passengers from potholes and frost heaves, that it should more effectively dismiss a bridge’s expansion joints. Always there is a belief that the Yukon Denali is suitably smooth.

I wouldn’t have it any other way.

Timothy Cain is the founder of GoodCarBadCar.net, which obsesses over the free and frequent publication of U.S. and Canadian auto sales figures. Follow on Twitter @goodcarbadcar and on Facebook. The GMC was supplied by GM Canada’s press office.