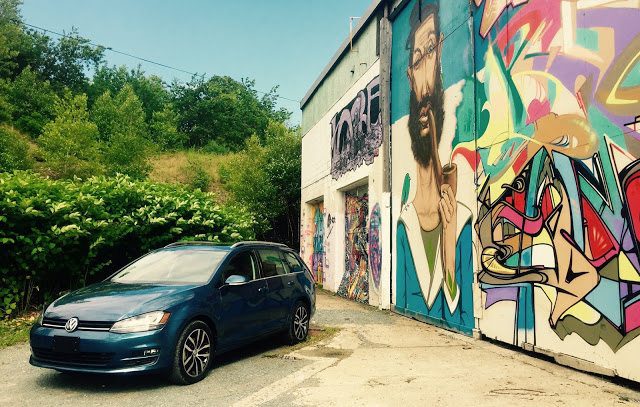 Anytown Car Mall Sales Rep: “We’ve had a look at your list of requirements, ma’am, and we’re going to present you with our patented Complete List Of Possibilities™ which never fails to identify a range of possibilities that will fulfill your needs.”

Car Buyer: “Oh, thanks, I’m excited to see what my money buys me.”

Anytown Car Mall Sales Rep: “Right on. So you said your budget topped out at $30,000. We can definitely squeeze in under that upper limit with one car or another. You want a wagon, not a simple hatchback. You want your automatic to be a dual-clutch gearbox. An import brand is also one of your prerequisites. A diesel engine is a must-have, which will be nice for you since a litre of diesel currently costs $0.17 less than a litre of regular gasoline.”

Car Buyer: “Exactly. I just hope I’ll be able to decide which one I like best.”

Anytown Car Mall Sales Rep: “Well, if you’ll just go ahead and scan this list here, I don’t think you’ll have too much trouble with the decision process.”

Anytown Car Mall Sales Rep: “Well, what do you think?”

Car Buyer: “There’s only one car on the list.”

Anytown Car Mall Sales Rep: “Oh, but what a car it is.”

Even if our example of a car buyer’s wish list was dramatically shortened, your options are still limited to just the one car. Sacrifice the direct-shift gearbox demand, or the import brand demand, or the diesel powerplant demand – you’re still looking at a Volkswagen Golf Sportwagon, and nothing else.

For faithful wagon aficionados who can’t afford a 3-Series, E-Class, or V60, this is it. 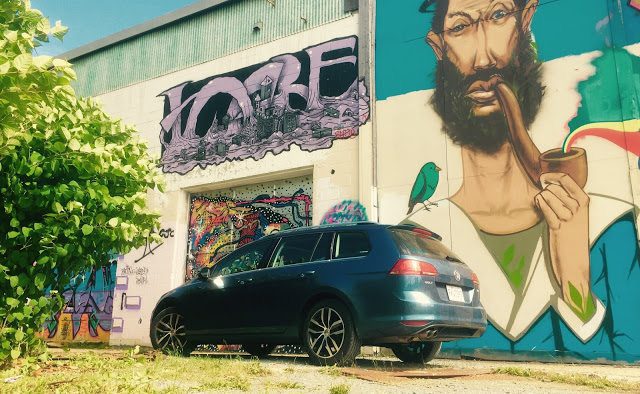 Yet when the results are this good, do we really even need choice?

Admittedly, this is certainly not the best Mk7 Golf to drive. That’s a consequential statement, you see, because the few wagons which continue to exist do so largely because there are a handful of buyers who don’t want to drive a small or midsize utility vehicle.

With the greatest load of equipment that Volkswagen Canada can throw at a Golf plus the heavy diesel engine and the 6-speed dual-clutch automatic (rather than the standard 6-speed manual transmission) and the added bodywork, this is not a driver’s car in the sense that a conventional, 1.8T, 6-speed Golf Trendline is.

True, diesels are all about torque, and the 2.0L turbodiesel produces 236 lb-ft of twist, more than enough for highway overtaking. But this is still a 3349-pound car with just 150 horsepower, and that low power figure is made apparent by the Golf Sportwagon TDI’s off-the-line sluggishness, the hint of midsize-like avoirdupois in corners, and brakes which need a greater application of force than you’d expect.

Buying a Golf Sportwagon because driving is important? As much as we love diesel engines, you ought to be looking at a 1.8T and a manual transmission. And while the prospect of next year’s all-wheel-drive, diesel-powered Golf Alltrack is exciting, be prepared for the TDI version of that car to be found wanting when the AWD system’s weight is fastened to the Sportwagon. 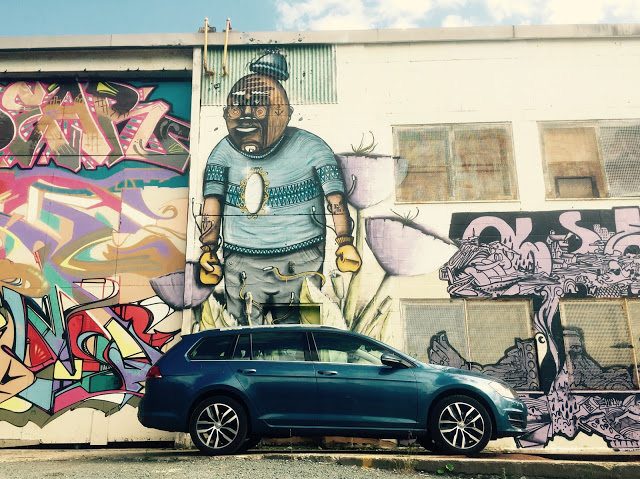 Nevertheless, we do seem to simply be looking at a car that’s simply specced beyond a reasonable level. (It costs far too much for a Golf, too, doesn’t it, even if $38K Golfs feel nicer than $48K BMWs?) Discard the fact that a Golf TDI DSG Highline Sportwagon drives like a plump Golf rather than just a Golf XL and you’re left with a modern vehicle that harks back to the best of a former era. To learn more, let’s answer our typical round of review questions.

WHAT IS IT?
In Canada, there are three Golf bodystyles: 3-Door, 5-Door, and Sportwagon. The 3-door Golf is only available in the base Trendline trim level or as a GTI hot hatch. The 5-Door is also available in mid-grade Comfortline trim (which we previously drove in 1.8T form) or in the Highline trim of our test wagon. The 5-Door can also be had as a GTI or Golf R. (GTI 3-Doors are sold in three trim levels; GTI 5-Doors in two trim levels. The Golf R is just plain mega, not unlike the Audi S3 we tested recently.)

All Golf 5-Doors and all Golf Sportwagons are available with a choice of two engines – the 170-horsepower 1.8L turbocharged four-cylinder or this Sportwagon’s 2.0L turbocharged four-cylinder diesel – and with a choice of automatic or manual transmissions. In the case of the Sportwagons with automatic transmissions, the TDI consumes 22% less fuel than the gas-fired model in the city; 16% less on the highway. That’s about two fewer litres for every 100 kilometres of city driving; one fewer litre for every 100 kilometres of highway driving.

Don’t fool yourself into thinking the Golf Sportwagon is a direct Outback competitor. Height and all-wheel-drive and lofty driving positions aside, the Outback offers 17% more cargo volume behind the rear seats and 10% more volume with the seats folded. Moreover, the difference in cargo volume feels greater than that. The Outback, of course, is ten inches longer, bumper to bumper.

DOES IT WORK?
The Mexican-made Golf Sportwagon feels decidedly German in virtually every way. That’s a good thing. If there is one key letdown it will be the negative experience created by the infotainment touchscreen, which might have been up to par in 2005 but remains woefully behind the times a decade later. There’ll be a better system next year. If you can wait, do so for this reason alone. 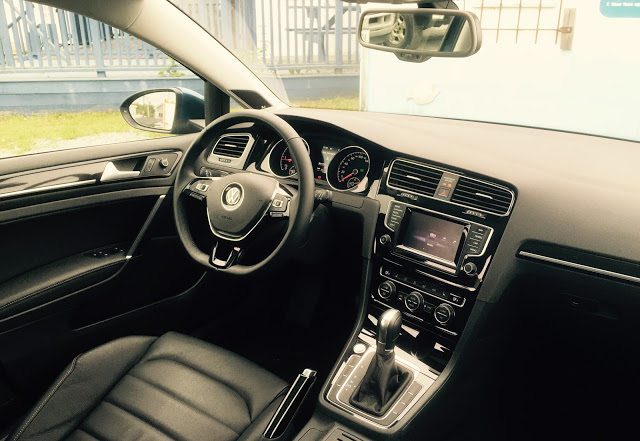 You won’t complain about materials, build quality, visibility, or the weight of controls, however. The downgraded dynamics we discussed earlier really only come into play if you’re expecting the fun on-road character of an almost-hot-hatch like the Golf 5-Door 1.8T. Ride quality, roadholding, steering accuracy, and every other facet that goes into making up the Golf Sportwagon’s driving behaviour shame most other small cars.

IS ANYONE BUYING IT?
The Mk7 Golf is a hit, with sales rising in 2015 to what should be the best calendar year since 2008, if not before. (First-half Canadian volume across the range is up 300%, year-over-year.) Although the Jetta continues to be Volkswagen’s biggest driver of volume in Canada, the Golf family is now Canada’s eighth-best-selling car.

The wagon, specifically, accounts for 30% of the Golfs sold in the United States, which is almost as many sales as the total achieved by non-GTI/R/Electric Golfs.

SHOULD I BUY SOMETHING ELSE INSTEAD?
It’s difficult for someone who believes diesel availability needs to become more widespread across the market, particularly in people movers and cargo haulers like the Golf Sportwagon, to render such a verdict, but unless a more spartan Golf TDI Sportwagon with a manual transmission brings back some of the joy of shorter Golfs, consider the 1.8T.

For wagon lovers considering something else, don’t bother. This is where it’s at.

HOW MUCH SHOULD I PAY?
$38K Golfs make me uncomfortable, and they likely cause some concern for your accountant, as well. A mid-grade 1.8T with a 6-speed automatic costs $27,800. Sure, that means losing the panoramic glass roof of this Highline and the limitless range of the TDI, but it’ll still be a Golf Sportwagon.

It’ll also be more fun, more affordable, surprisingly efficient, and the dog will still fit in the back. If that doesn’t sum up the ideal wagon, I don’t know what does.

Timothy Cain is the founder of GoodCarBadCar.net, which obsesses over the free and frequent publication of U.S. and Canadian auto sales figures. Follow on Twitter @goodcarbadcar and on Facebook. The Golf was supplied by Volkswagen Canada’s press office.