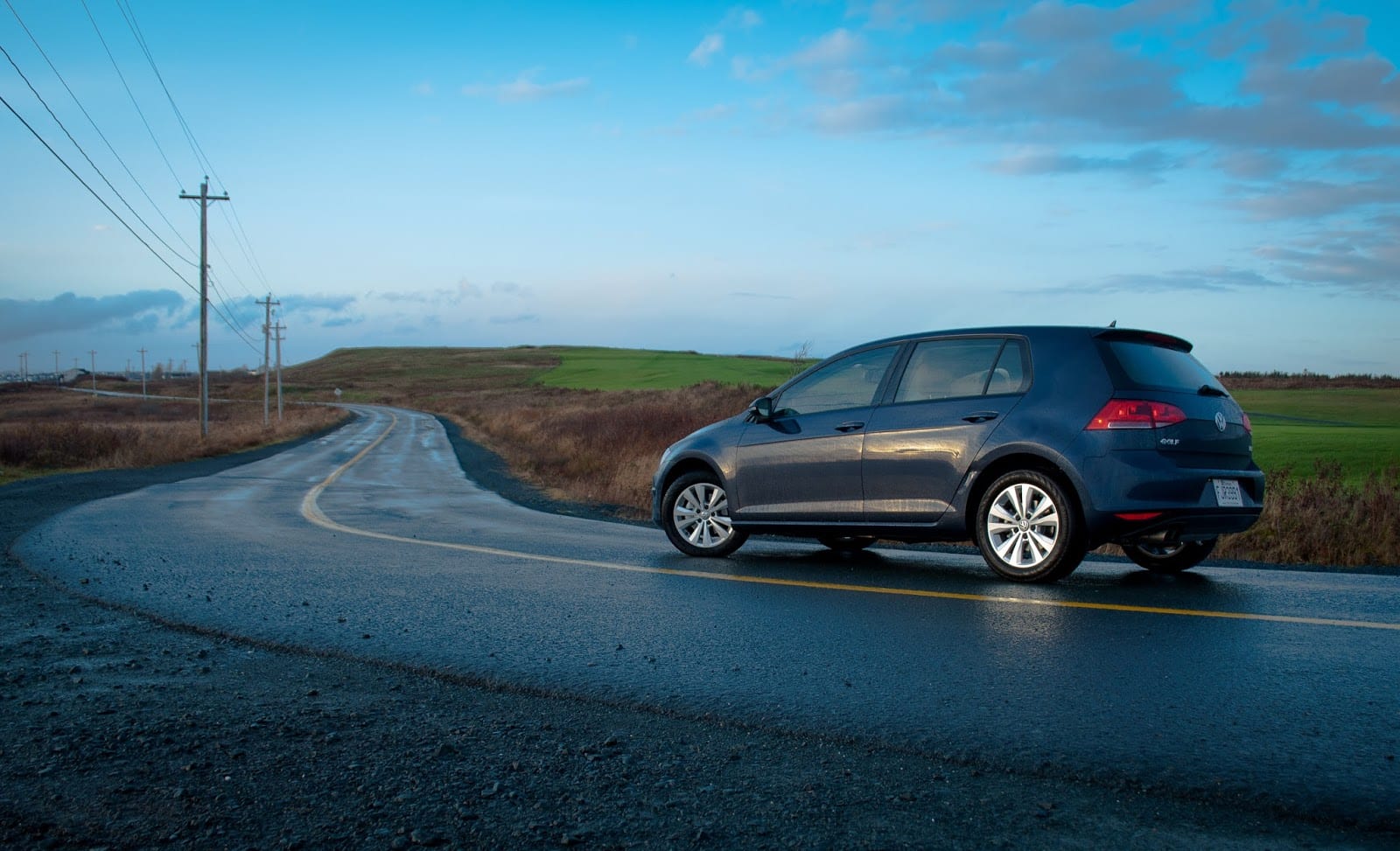 2015 Volkswagen Golf 1.8 TSI Comfortline Review – You Get What You Pay For 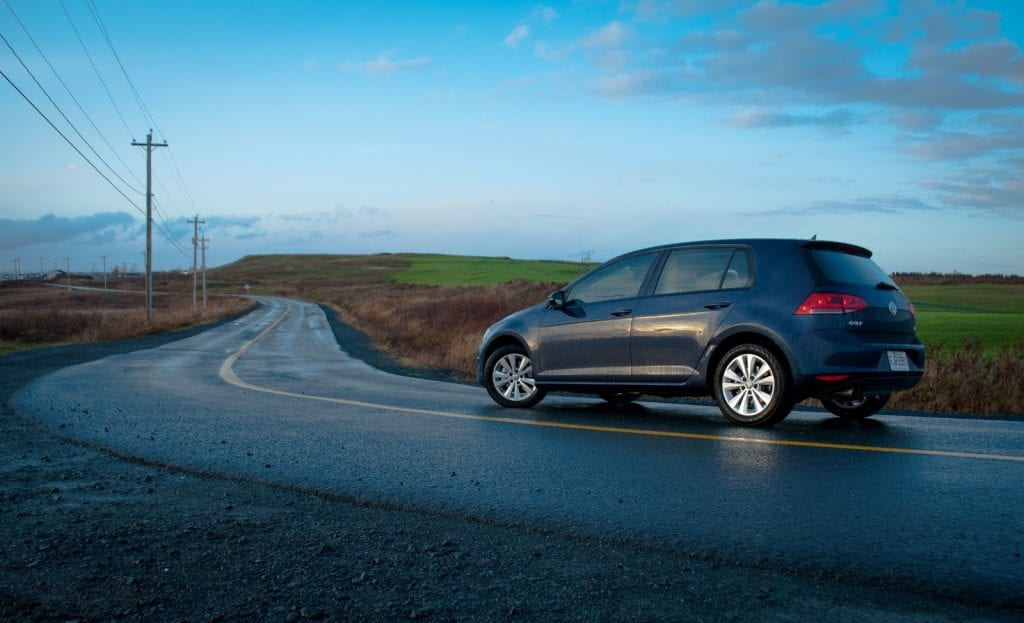 In 2002, you could pair Volkswagen’s 1.8T with a 6-speed manual transmission. Our test car used a 5-speed manual.

Is this progress? Strangely, yes.

Regardless of what the spec sheet says, the new 1.8T is still a very quick car when mated to the 5-speed manual. And though the transmission would surely benefit from a tall sixth gear and feels as though it could use more tightly spaced ratios, shift quality is excellent and the clutch is friendly, with no learning curve required. 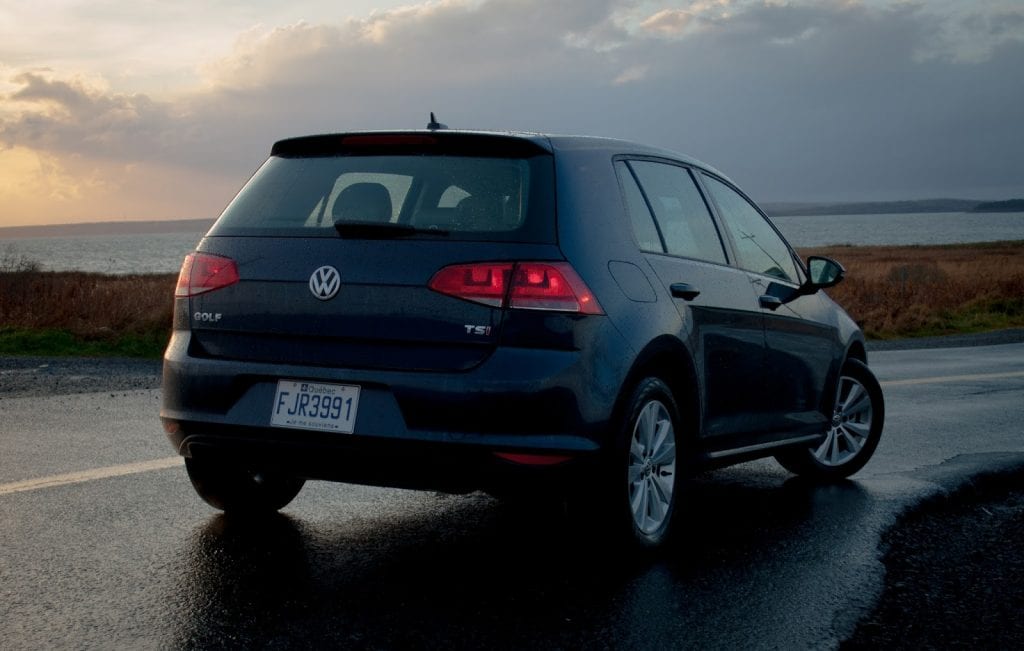 Over the course of a decade and multiple generations of Golf, the greater gains have (clearly) not come in terms of outright power but in overall refinement and the driving experience as a whole. These upgrades are unlikely to change the fact that the wild fuel economy figures achieved by diesel-powered Golfs will still draw greater Canadian attention. Like the well-behaved child who always carries his dishes back to the sink with two hands and efficiently and correctly finishes his homework, but who still sees all his parents’ attention paid to his delinquent little brother, der neue base Golf does its level best but still isn’t as desirable as its siblings.

OUR CAR
This four-door, manual-shift Golf, loaned to us for a week-long visit by Volkswagen Canada was priced at $25,985 (freight and PDI included) with one $1695 option package. As a mid-grade Comfortline example, this Golf featured a sunroof, leatherette upholstery, and dual-zone climate control.

Absent the optional Fender system, audio quality was still more than acceptable. Volkswagen’s 2.0L turbodiesel $2500 in to the cost of any Golf in Canada. A 6-speed automatic transmission is another $1400.

INSIDE
With fuzzy carpeting spread across the front doors’ storage compartments and a dash covered in material so squeezable I expected fruit juice to come pouring out, there’s no doubt that the Golf’s perceived quality quotient tops the class.

The Golf’s infotainment unit lags, both in actual use and behind segment leaders like Mazda Connect. It’s not a terrible system to use – I liked how it allowed me to scroll through satellite radio stations without actually selecting one – but the graphics and operational speed are behind the times.

The 5.8-inch screen also seems too small for a proper backup camera, or is it just that the the camera isn’t a particularly good one, washed out as it was in daylight and too dim later in the day?

Comfort is a key Golf edge, with first-rate seats and a huge range of adjustment in those seats and the steering wheel. Wind and road noise is something other small car owners encounter, but the Golf offers a proper luxury car ambience, only decontented.

Rear seat space doesn’t impress, however, as the placement of the especially narrow Diono Radian RXT in the middle position required an adult alongside to slam the door on their hip.

Sure, it’s a small car, but many small cars these days do better. Hatchback versions of the Hyundai Elantra, Mazda 3, and Subaru Impreza all have more overall space for humans.

STOWAGE
The Golf does have a bit more space behind the rear seat than the 3 and Impreza, however, and the cargo area is shaped like a box with little intrusion. Seats down capacity beats the Elantra, as well.

Of course, all are surprisingly practical cars, yet they also help to clarify the appeal of small crossovers, as our Baby Jogger Summit X3 needed its wheels removed if it was to fit under the cargo cover in the Golf. Where’s the Golf R wagon when you need it?

FITTING ROOM
Like virtually all continuing nameplates, Golfs have certainly grown over the span of generations. This Mk7 car is 167.5 inches long on a wheelbase of 103.8 inches; 2.6 inches longer than the Mk4 car we mentioned earlier with a wheelbase that’s been stretched nearly five inches. Relative to modern machines, the current Golf is just under two feet shorter than a new Toyota Camry; 7.5 inches longer than the 2015 Honda Fit. It’s 14.7 inches shorter than the latest Jetta with slightly less wheelbase and slightly greater width.

GOING/STOPPING/TURNING
Those tidy dimensions are central to the Golf’s on-road appeal. It’s as tossable as a properly set-up subcompact but as unflustered as a much larger car. Mid-corner pavement protrusions don’t bother the Golf even when you’re driving as enthusiastically as you might in its GTI sibling. The Golf’s brake pedal could be firmed up, but the weight of other controls is in keeping with the car’s mission.

It’s not a hot hatch, but there’s no mistaking this ordinary Golf (on unaggressive 205/55R16 Continental ContiProContacts) for anything other than the foundation of a great hot hatch. Quicker turn in, sharper throttle response, and a suspension that needs only to be modestly stiffened would produce a wonderful all-rounder. It is not crying out for more torque.

RIVALS
A Mazda 3 offers much of the Golf’s driving appeal but lacks its hushed cabin and always-serene ride quality. Subaru’s Impreza does not come within range of matching the Golf’s upmarket interior but offers Vermont’s favourite all-wheel-drive system. It’s obviously difficult for the Golf to match the value and content of the Hyundai Elantra GT and Kia Forte5, but the driving experiences between those cars and the remarkable Golf are worlds apart. 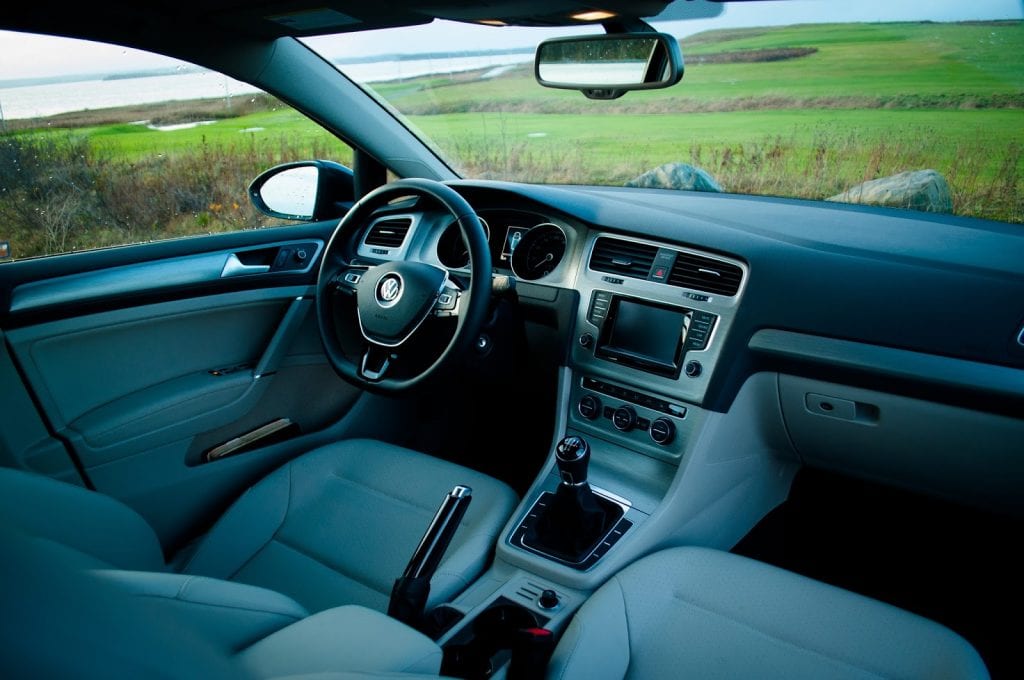 SELLING
Over the course of the last ten months – but not in the last two – the Golf lineup has been outsold in the U.S. by its own offspring, the GTI. With the Mk7 now widely available, the non-GTI/R/E Golf lineup doubled its U.S. October volume. Yet at 2351 units, it was by no means a popular car in America. HybridCars.com says 41% of the non-GTI Golfs sold this year have been diesels. The Golf family is Germany’s best-selling vehicle; the UK’s fourth-best-selling vehicle. In October 2014, it was Canada’s tenth-best-selling car.

VERDICT
Aside from a frumpy radio and a sunroof visor which crudely slides back and forth, the Golf is an impressive piece, not just lacking in glaring faults but full of admirable elements. One might wonder why Americans are so indifferent, until one realizes that an entry-level midsize price point makes for a tough sell. The Golf 1.8 TSI is a car I want, it’s just not a car I want to pay for, not with these interior dimensions on this continent. Not when this car consumed 8.4 litres of fuel per 100 kilometres in a mix of city and highway driving while the last Golf TDI we tested sipped just 5.8 L/100km.

Oh, have a little compassion for the well-behaved gas-fired Golf. Even when reviewed positively, the whole story deteriorates into praise of its oil-burning sibling. We might as well pile on by mentioning the superior styling of the Mk1’s round headlights.