This is all very normal. I exited my driveway, turned left at the end of our cul-de-sac, then right onto our village’s main two-lane, low-speed thoroughfare, shifted into third and fourth, turned up the satellite radio’s volume, switched the driver’s heated seat on full blast, and finally came to a stop a few kilometres later at a red light.

I’m waiting for the light to turn green, thinking that I must remember my excuse (crackers and hummus?) for leaving the house at 9pm at the end of a busy day just so I could drive this bright red, 4-door, 6-speed manual, 210-horsepower, 2015 Volkswagen Golf GTI. But it’s an awfully normal car. It’s not barking or bellowing or champing at the bit. Any gear will do. It’s not announcing the roughness of our coastal roads. I can see out of it. It’s completely tractable. It’s just a Golf.

Only a few weeks prior, the 2015 Volkswagen Golf 1.8T left me impressed, led me to believe that it was a terrific foundation for a GTI, and generated many more smiles per mile than I anticipated. Now, in mid-December, a week-long Christmas present from Volkswagen Canada seemed very much to be that first car, but with plaid seats, an upgraded equipment list, an extra cog in the gearbox, bigger wheels, and slightly sportier exterior styling.

When you want it to be.

And when you don’t, the 2015 GTI maintains its disdain for MazdaSpeed 3-like raw exuberance while expressing itself instead through polished, refined, measured, soul-stirring performance; conducting itself with the grace and poise one expects from a far pricier German performance car. 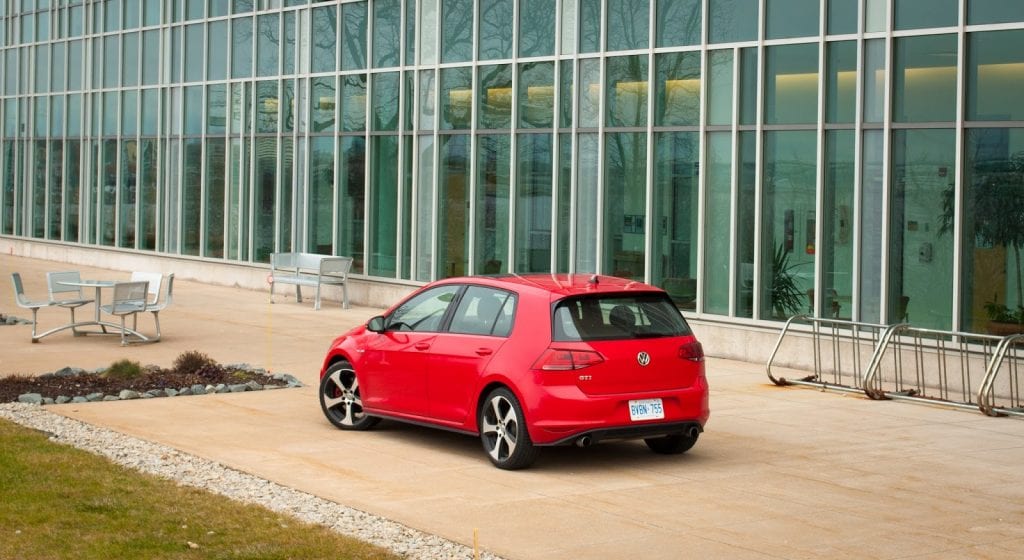 COST
Pricier? In Canada, it’s not as though the 4-door GTI is among the most affordable hot hatches. In a sense, VW Canada charges CAD $4900 to double the number of entry points as the CAD $34,290 4-door GTI is only available in Autobahn trim. (The 2-door GTI Autobahn starts at CAD $33,390.)

Volkswagen’s American clientele need only pay an extra $600 for the rear doors. In the U.S., the 6-speed dual-clutch automatic is an $1100 option.

Our Canadian-spec 4-door Autobahn tester was optioned only with a CAD $695 technology package which included forward collision warning and sat-nav.

I love the plaid seats; my Mazda 3-driving neighbour was disgusted by their retro vibe.

The rearview camera is easily washed out and offers little assistance at night.

The infotainment unit’s graphics and speed are comically outdated.

The GTI’s knack for swallowing a new dishwasher during a Boxing Day sale or assisting with a cross-town move is appreciated all the more because it’s still a small car.

IN MOTION
Consequently, the MK7 GTI feels delightfully small to toss down an empty rural road, but it has the decorum of a much larger car when traversing rough city streets and cruising down the highway on a long journey. Ride quality is firmer than what you’ll encounter in a conventional Golf, but only moderately so. Meanwhile, the degree of steering and handling sharpness acquired by the GTI in its transition out of the Golf’s cocoon is palpable the moment you apply a bit of pressure.

The regular Golf, remember, is a fun car to drive quickly. It’s like playing intramural basketball: watch me drop a couple three-pointers before clanging one off the front of the rim and I don’t care since we’re just messing around and we’re all enjoying ourselves at this pace aren’t we? The GTI locked in a college scholarship in its junior year of high school with a killer crossover, a deadly fadeaway jumper, a solid defensive game, plenty of offensive rebounds, and a few crowd-silencing dunks. All modestly celebrated, of course. It’s a GTI, after all. Mature, prudent, sophisticated.

This latest GTI masks its front-wheel-drive nature remarkably well by quelling understeer, remaining relatively neutral regardless of what kind of stupid mid-corner lift-off or downshift or sudden braking or surprised squirrel avoidance maneuver you throw at it. That’s in Normal mode.

Press a button beside the shifter to choose Sport settings and the car tenses up in all the right places. The electric-assist steering could still be a bit quicker to react, but that hardly noticeable deficiency may be due to the winter tires more than any of the GTI’s inherent trait.

That the new GTI could readily amaze with its on-road behaviour is a testament to both the quality of its Continental ContiWinterContacts and the car’s own beautifully modulated suspension setup. Sure, the Volkswagen GTI is blissfully dull and cordially mundane when you’re driving your mother-in-law’s aunt to church. But 258 lb-ft of always-on torque, a short-throw shifter and a clutch with a clear point of engagement (which may be too high for some) come together with a perfect driving position, small car tossability, sports car grip, and grand touring unflappability to create a car that you can use to scare your nephews.

GRAND BARGAIN
Best of all, you can enjoy the GTI in between those two extremes. It’s not so fast that you can’t floor the throttle without breaking laws in all 13 provinces and territories. The turbo 2.0-litre’s growl is pleasant, but not attention-grabbing. 9.5L/100km (observed) in mostly city driving is more than tolerable for a car driven enthusiastically on more than three or seven occasions. The GTI is flexible enough to be left in third gear all day long. And there’s feedback from the chassis at six-tenths, so you don’t need to rent a track and drive flat-out in order to feel like you and the car belong together. 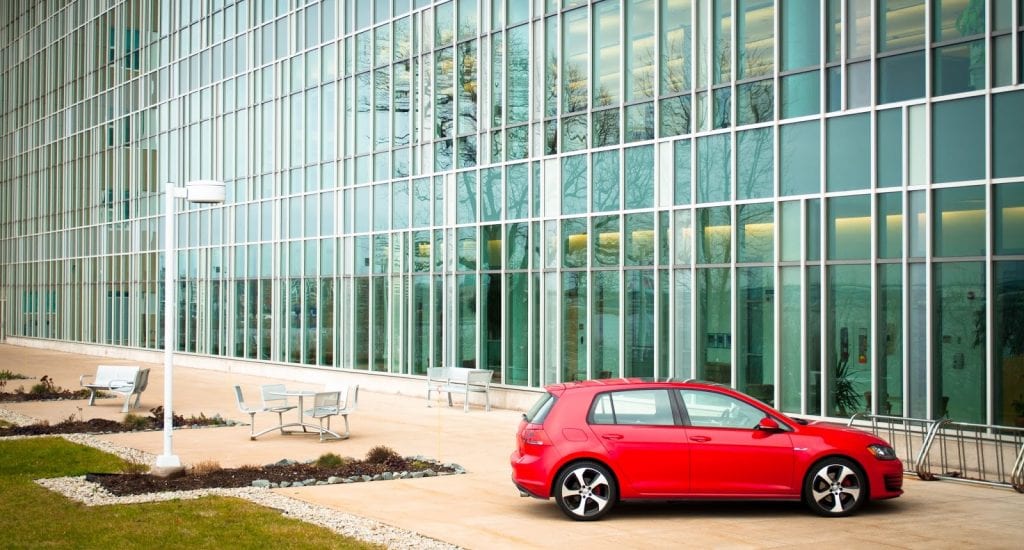 The GTI, perhaps now more than ever, overcomes class distinctions. This Mk7 GTI’s performance goes beyond what its specifications suggest. Both in terms of style and texture, the interior possesses the aura of a car priced in excess of $40,000.