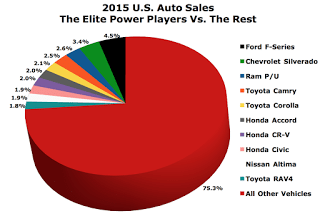 This isn’t a progressively sliding scale, with the Ford F-Series on top and other vehicles only slightly behind until you get to the 99th-best-selling vehicle in America which isn’t much less popular than the F-Series.

No, America’s 10 best-selling vehicles claimed 25% of the U.S. auto industry’s sales volume in calendar year 2015. Though there are some 300 vehicle nameplates on offer, yet little more than 3% of the available vehicles generated one quarter of all sales activity.

This chart appears to show the strength of the bulk of the market, the peloton if you will.

With 75% of the sales, the ten top-selling vehicles – F-Series, Silverado, Ram, Camry, Corolla, Accord, CR-V, Civic, Altima, RAV4 – divvy up a small swath of the available real estate.

But then one remembers that the bulk of the space equals the sales of nearly 300 different vehicles, including many popular ones.

And then it all becomes easier to grasp.

The Ford F-Series alone accounts for nearly one out of every 20 new vehicles sold in America.