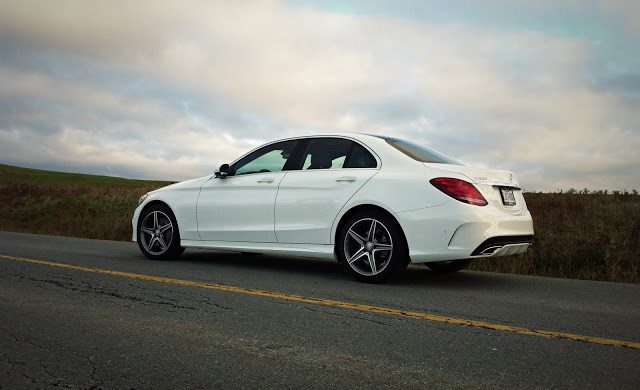 We use a lot of terminology in our quest to classify automobiles which actively pursue thicker portions of your pocketbook.

No matter how many E-Class Benzes ply their trade as German taxicabs, we still allow the S-Class’s high-class image to rub off on the CLA in order to call the entry-level Mercedes sedan an “entry-luxury” car. A 3-Series without leather, lacking a six-cylinder, can still be called a luxury sports sedan. Lexus’s CT200h uses a Prius powertrain, but hey, it’s a Lexus, so it must be “premium” right?

Upscale. High-end. Executive. Premium. Luxury. The words, commandeered by the manufacturers themselves, have lost so much of their meaning because we have lost our ability to place any faith in words which too often turn out to be nothing more than marketing catch-phrases.

But words don’t matter. Forget the words. Ignore the words. Discard the words. Do whatever you have to render the traditional classifying terms null and void.

Doing so will help you accept the idea that the new W205 2015 Mercedes-Benz C-Class, tested here in C400 4Matic form, is an honest-to-goodness, legitimate luxury car. Not because it wears a three-pointed star on its key fob, steering wheel, trunk lid, grille, and bonnet, but because it positions you in “the state of great comfort and extravagant living.”

It starts with bank vault-like door closures, but it’s the high-quality interior that truly positions the new C-Class as a cut above its traditional rivals. If not for its size, power output, and pricing scheme, the C-Class wouldn’t really come across as a 3-Series rival in 2015. 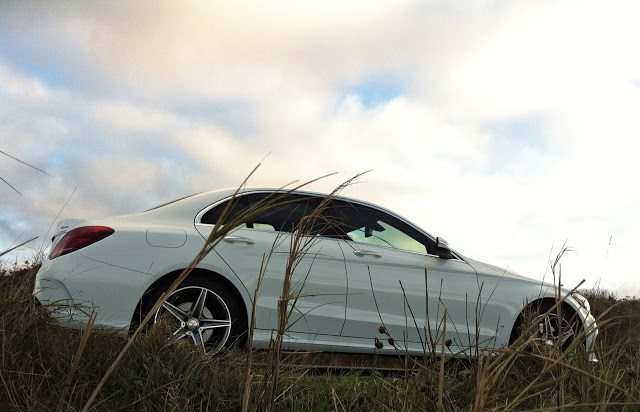 All the common touchpoints and the places you’ll never touch will cause you to think the C-Class is too nice, too luxurious, to be lumped in with the ATS, IS, Q50, and even the A4.

More than the materials themselves, it’s the narrow tolerances, the snug fits, the silent operation of moving parts, the unusually tactile way in which vents open and move, the snickety-snicking of the volume control wheel, muted accent lighting, and the perfectly weighted forward and backward motion of the Agility Select rocker.

Piano black finishes across the central part of the cabin are a big mistake, but not a mistake an actual C-Class buyer must live with – there are choices. The perched central screen is a big no-no from a stylistic perspective, as well. Yet it looks better here than in the CLA250 4Matic we reviewed recently, in part because of its size; in part because of the spectacular cabin in which it resides. Tacked on the dash, the C-Class’s screen does keep your eyes closer to the road, but there’s plenty of convoluted interior mechanics to distract and disturb a driver.

Besides speech recognition, theoretically a wonderful solution but comically ineffective in this C400, many controls can be operated with conventional buttons mounted below the touch screen, or a touchpad, or Mercedes-Benz’s better-known control knob, which is partially hidden by the touchpad. Seat controls, in typical Mercedes-Benz fashion, are located up on the door. The cruise control stalk is hidden away behind the steering wheel, mounted too close to the power tilt and telescoping wand. Wiper options, which are surprisingly limited, are on the same stalk one uses to operate signals. Then on the other side of the wheel, the shifter is a column-mounted unit but not a straightforward column shifter in the manner of nearly all column mounted shifters in the history of column mounted shifters.

But the C-Class is a luxury car, both nominally and in reality, and thus a little complication goes a long way to convincing us that this isn’t an intuitive Hyundai Genesis. Goodness no, that would be a crying shame. No, go and accidentally swipe that touch pad when you meant to pres it, fly past Pop2K and The Pulse and The Blend and Love and Elvis in your attempts to access SiriusXM’s 90s on 9. Because Steal My Sunshine.

The C-Class is also a bigger car than it used to be: nearly four inches longer than the old car on a wheelbase that’s three inches longer than the W204 car. This provides slight numerical differences in interior space – 1.8 inches more legroom in the rear; 1.6% more cargo capacity – but the difference, in reality, is more stark. It’s ten inches shorter, bumper to bumper, than an Acura TLX and doesn’t feel nearly as spacious, but the C400’s rear seat is more usable than the rear seat in the slightly longer Lexus IS. Capacious? No, but usable. Particularly for front seat occupants actual comfort is downright, dare I say it, luxurious.

Although it’s a bigger car than the old C-Class, it’s also marginally lighter. This C400, lacking any extra performance options, feels decidedly compact to drive and park (not that you’d want to use Active Park Assist, which is prone to mistakes and is slower at parking than you are) and would feel rather tossable if not for the slow-to-react steering. Brake feel and performance is top-notch stuff for a non-performance-branded German sedan, perhaps even for an AMG car. 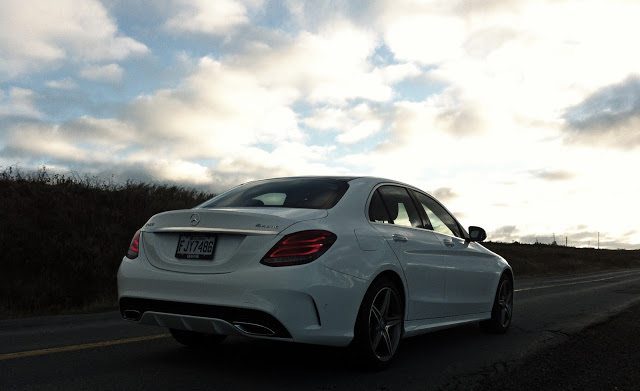 Ride quality is properly firm and unflustered almost all the time but then, suddenly, bizarrely crashy when the coastal Atlantic pavement deteriorates and the low-profile rubber (225/45R18 front, 245/40R18 rear Continental ProContact GX SSR) pays its price. But aside from those rare moments which likely won’t even be encountered where road conditions aren’t dreadful, it’s a calm car. Better yet, the C400’s optional air suspension likely makes for both an improved ride and superior handling.

The new C may be a return to form for a brand that didn’t use to perpetually chase BMW-like sporting credentials. Yet while the C400 4Matic isn’t a sports sedan in the sense that Audi’s S4 or a BMW 335i Sport is a sports sedan, it’s a very athletic car with hugely impressive engine specs. The artificially aspirated V6 sends none of its vibrations into the cabin, but it can come across a bit gruff for, say, lovers of inline-sixes. 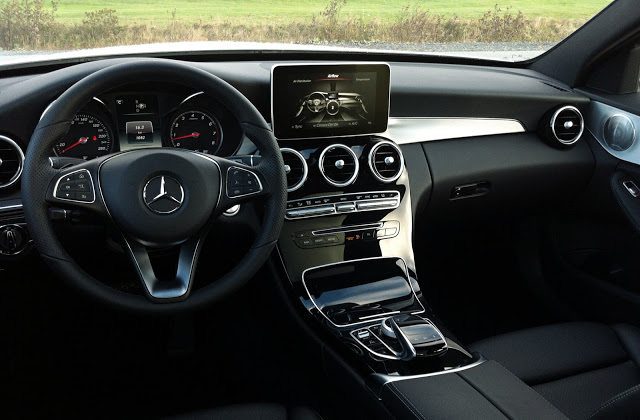 This fresh-off-the-line car landed in my driveway early on its tenure with fewer than 1200 kilometres/800 miles on its odometer, but the 3.0L twin-turbo V6’s 329 horsepower (at 5250 rpm, and 354 lb-ft of torque at 1600 rpm) felt like ponies well versed in CrossFit, Pilates, hot yoga, and spinning. This is a fast car.

Switch the C400’s Agility selector into Sport+ and those horses behave more like a pack of large, untrained, on-leash puppies furiously pulling their way to the dog park. Eco, Comfort, and Sport are all better options unless you plan to aggressively drive down a great road. 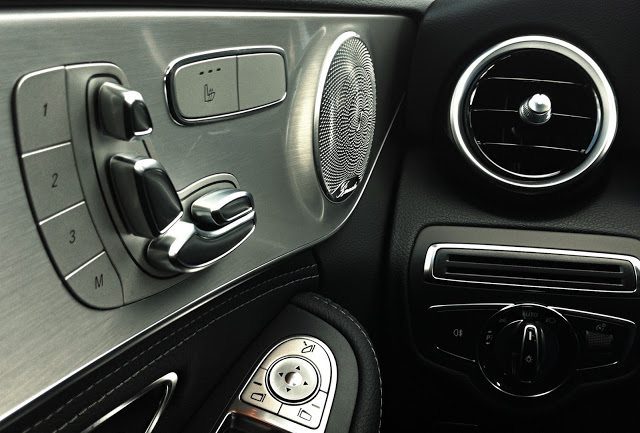 With all of these modes used intermittently, in a mix of city and highway driving, the C400 4Matic Mercedes-Benz Canada loaned to us for a week in November returned 10.4 L/100km, a real achievement for a green engine with 329 horsepower, an often heavy right foot, and mandatory all-wheel-drive.

And again, though the C400 4Matic is poised and balanced through corners, though it accelerates like a supercar of 15 or 20 years ago, and though it brakes remarkably well, this isn’t necessarily the keen driver’s choice. Its 7-speed automatic transmission doesn’t shift swiftly enough and its intelligence is countered by a reluctance to play. It’s a lot like the guy who says he likes 90s music, but when Waterfalls comes on, he won’t turn up the C400’s optional Burmester sound system, a sound system which deserves to be jacked for all manner of music, whether it’s TLC or CCR. 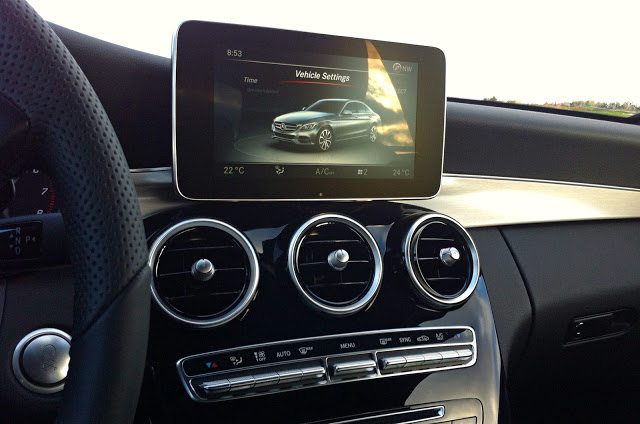 It’s abundantly clear that Mercedes-Benz crafted a luxury car with athletic ability, rather than an All-American athlete with nice finishes in prominent places. (On that note, the C-Class uses its high-grade materials in all corners of the cabin. And it is thoroughly American by one standard: new Cs are built in Alabama with the ML and GL.) They won’t market it that way, of course, because even older buyers who remember Mercedes-Benz at its best feel the need to associate “sport” with the period of youth they’re trying so desperately to remember, assisted by ginkgo biloba, pickleball, and inappropriate use of leggings.

Regardless of which supplements its owner ingests, which sport they play, and how they dress, the new C-Class will nevertheless be a true luxury car, in an authentic use of the phrase. And with an as-tested Canadian price of $57,975, it better be.