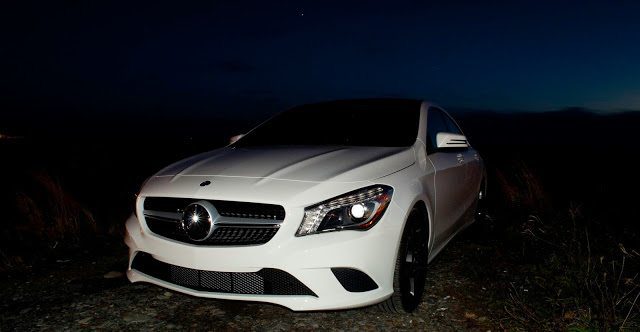 In John Grisham’s latest novel, Sycamore Row, the author went back to a cast of characters which appeared in his first novel, A Time To Kill. Another Sycamore Row character, the esteemable but enigmatic Chancery Judge Reuben Atlee, reappears after featuring in another last will and testament-oriented Grisham novel, The Summons.

You may be anxiously awaiting a Boxing Day reading of Sycamore Row, so we won’t delve into the details the way we might if opening a car review with a literary reference from Dickens, Twain, or Fitzgerald. Suffice it to say, there’s a disputed will, Atlee is the presiding judge, and so controversial is the case that Atlee doesn’t want to personally render a verdict. He’d rather a jury reach the verdict instead. This absolves him of responsibility in small town Mississippi while still allowing him, in his apparent boredom, to be actively involved in a controversial case.

If the Mercedes-Benz CLA250 had gone to university, it wouldn’t have graduated with any kind of bachelor’s degree that laid a foundation for law school. No, the CLA studied fine arts with a major in exterior design.

Nothing about this car generates as much conversation as its exterior, the swooping and the drooping; the statement-making and the second-glance-inspiring; the light signatures and the character lines.

But I’m going to take a tip from Reuben V. Atlee and allow you, the jury, to form your own conclusions. You are a member of a tainted jury, after all. You’ve seen the images, studied the evidence, and prematurely discussed the evidence with other members of the panel. Let’s not waste time here listening to my opinion when your eyes have already beheld the subject. (Let’s instead waste time by drawing parallels with popular fiction?)

Of course, the CLA majored in exterior design, but that doesn’t mean Mercedes-Benz has presented us with nothing more than a rolling clay sculpture, windows deeply-tinted and lacking a drivetrain à la Honda’s FCEV from the L.A. Auto Show floor. This CLA250 is a real car that must do more than walk New York Fashion Week’s runways. It’s allegedly capable of seating five, hauling 13 cubic feet of luggage, travelling 38 miles on a gallon of premium gasoline, and accelerating to 60 miles per hour in 6.3 seconds while ensconcing you in luxury.

In lieu of a design case study, we’ll forget haute couture and study the evidence as it presents itself. Can I get a be a witness?

GOING, STOPPING, TURNING
Equipped with a turbocharged four-cylinder that generates 208 horsepower and 258 lb-ft of torque, the CLA250 feels quite a bit swifter than its figures suggest. Perhaps it’s because the CLA250 – which uses a 2.0L engine and not a 2.5L as its name suggests – weighs less than 3300 pounds. Mercedes-Benz’s own basic C-Class weighs nearly 200 pounds more despite being a smaller car, bumper-to-bumper and mirror-to-mirror. Maybe it’s because all 258 torques are available at a low 1250 rpm.

Regardless, the CLA250, though entering the courtroom with a worse power-to-weight ratio than the Volkswagen Golf GTI, feels quicker than that car.

Mercedes-Benz’s dual-clutch gearbox isn’t as good as Volkswagen’s, however. It tends to lug along with revs that are too low and feels a bit herky-jerky in parking lots. And while it outshines a conventional automatic when you’re really, properly, genuinely driving down a twisty road, it never snaps off shifts the way Volkswagen’s DSG does.

Pushing the Benz – really, properly, genuinely – down a twisty road is something you will definitely want to do. The front wheels apply the 2.0L turbo’s power with dangerous ease. The steering isn’t full of feedback, as very few cars offer wonderful feel this days, but it does weight up nicely in all situations. The wheel itself is nice to hold, as well, not excessively thick like the ones you’ll find in some German cars.

Even on these base 17-inch wheels that don’t adequately fill the wheelwells like the optional 18s, the CLA250 is much more responsive than I expected, a great deal more agile than I anticipated, and distinctly more composed and unruffled than I predicted. Brakes, both in feel and performance, are exceptional.

One might have guessed that Mercedes-Benz could have spent too much time and money finessing the sheetmetal to focus on their entry-level sedan’s front-wheel-drive chassis. One’s guess would have been wrong.

SITTING, RIDING, LIVING
Nevertheless, Mercedes-Benz’s chassis development efforts had more to do with the car’s cornering ability than they did with making the CLA ride comfortably. Many cars which sound and feel as though they’re being demolished by Nova Scotia’s massive early winter potholes and raised manhole covers also suffer from a busy, frenetic ride. Yet by remaining fairly levelheaded, the CLA250 doesn’t allow slightly rough roads to disturb its occupants.

Serious pavement imperfections and sudden roadway elevation changes, on the other hand, severely unsettle the CLA, far more than the very same pavement imperfections unsettle other easily-agitated cars. With the shakes and rattles and clatters and jolts that come from encountering bad bits of asphalt, the CLA250’s driver is forever juking and jiving to steer around the worst areas. In this case, the juking and jiving doesn’t irritate passengers as much as bullseye impacts, the kind of impacts with nasty tarmac blemishes which, mind you, the Buick Verano Turbo fails to even notice.

Passengers at GCBC Towers now include a month-old baby boy whose car seat easily fit in the CLA with very little sacrifice from the front passenger. The true cost of style can be seen when loading the Maxi-Cosi Mico into the car, as the sloping roofline necessitates the perfect twist in order for the handle to squeeze through. If your car seat has a taller handle, beware. As you’d expect, rear head room is dreadful, virtually nonexistent for anyone above six-feet tall. Yet leg room isn’t bad and seat comfort is almost as terrific as it is up front.

Indeed, the two front seats are powered in all sorts of directions. Lumbar support isn’t just powered for inflation but for motion up and down your back. Together with the tilting and telescoping wheel, the perfect driving position is easily found and is also, in fact, perfect. The driver and front passenger will notice chintzy plastic covers between their seats, and a handful of buttons across the lower section of the dashboard are a bit brittle, but a sense of style pervades. Mercedes-Benz’s COMAND screen is pitifully small and awkwardly positioned (and thankfully easy to see without too great a removal of eyes from the road), but the system itself is very simple to operate, and the knob right in front of the armrest never failed to cooperate.

Unlike the COMAND screen that’s easy to see, nothing outside the car is easy to locate without spotters perched NASCAR-style atop surrounding rooftops. The backup camera displays its findings through the small screen, one which covers up a chunk of the display with the words: “Check entire surroundings.” Even the side mirrors are tiny, and for a car that hardly allows its passengers to see anything out the rear and side windows, you’d think the mirrors would be extra-large. Shoulder checks? Fuhgeddaboudit. The B-pillar is right there, it’s black, and it’s broad.

MODES & METHODS
Fortunately, you won’t need a backup camera or spotters to seek out many fuel stations. I figured the CLA’s EPA fuel economy numbers had to be fudged at least a little. In the car’s week at GoodCarBadCar, with temperatures plunging below freezing for most every drive – many of which were motivated by an enthusiastic right foot, most of which took place in the city of Halifax and its suburbs – the CLA250 averaged 29 miles per gallon on the U.S. scale. With the temperature hovering around -5°C and the car not yet at operating temperature, we saw 33 mpg during a highway trip outside the city.

Think that 13% drop from its EPA 38 mpg highway rating is too sharp? Not at all, not for a car with a green engine in cold weather with a driver who isn’t being as gentle as he should.

The CLA250 uses fairly brutal stop-start technology to aid city efficiency when driven in an eco mode that hunts for a higher gear like Jake Brigance searching for justice. In Sport mode, the CLA’s transmission holds a gear nicely as you approach the next corner, not unlike Judge Atlee overruling an objection –“Relevance, your Honor” – until he sees where the line of questioning is headed. 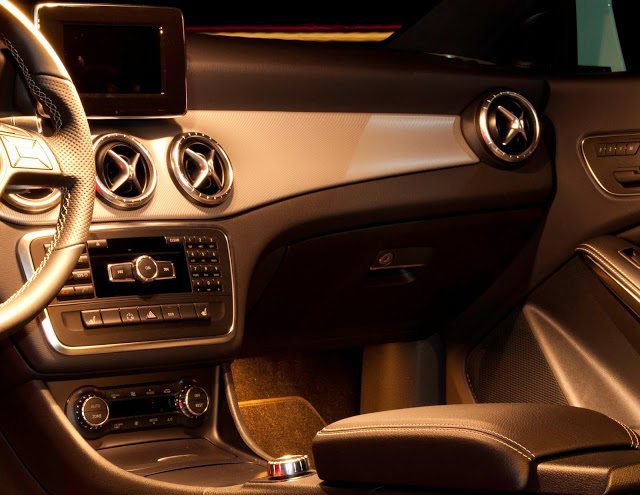 PRICING & PAYING
Non-Grisham fans won’t know what we’re talking about. When it comes to this Benz’s appeal, car buyers who place no value on image and status won’t get it, either. Yes, for a Mercedes-Benz, the CLA250’s $33,900 base price makes it relatively inexpensive. (As-tested, with a $2800 premium package that includes automatic climate control, heated seats, a vast sunroof, and a backup camera, the CLA still costs $3000 less than a basic rear-wheel-drive C250 that makes less power.)

Naturally, consumers who lean towards volume brands are keen to point out that, as just one example, the most premium front-wheel-drive Honda Accord has a 278-horsepower V6, heated front and rear seats, blind spot monitoring, 18-inch wheels, navigation, a trunk that’s 25% bigger than the CLA’s and a cabin that’s 14% larger. And it costs $35,400. Meanwhile, a Kia Forte SX costs $26,195, is fitted with heated front and rear seats, a heated steering wheel, a cooled driver’s seat, much of the CLA’s as-tested equipment, and a number of other goodies, too.

That’s beside the point though, isn’t it? A CLA purchase isn’t based on spec charts and spreadsheets; on ride quality, visibility, or screen size; on comparisons with Kias, Hondas, or even other Mercedes-Benzes. The CLA250 plays on passions. It’s the fine arts graduate with a closing argument.