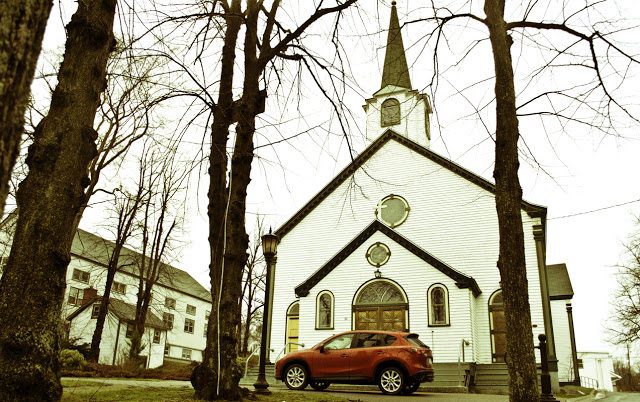 And by meeting, I mean 90 minutes of badminton at a free gym in Fall River. Ah, Fall River. It’s known as one of Nova Scotia’s wealthiest political ridings – erbody has a boathouse – but more importantly, it’s home to a couple of the region’s best on-ramps.

Now, mid-day badminton with my brother and a couple of far superior badminton players isn’t a typical experience for me. On this day, however, I was driving a 2.5L-powered 2014 Mazda CX-5 GT from GCBC Towers near the mouth of the Halifax Harbour inland to Fall River. The dog was in her crate. Pockets were checked for the presence of a cell phone, wallet, and keys. My sneakers were by the door.

This was to be my first highway experience in the CX-5. Not unlike the stunning Mazda 6 I drove a couple weeks earlier, there was a bit too much wind noise creeping in around the A-pillar and sunroof. Also like the 6, the CX-5’s full-of-life steering sacrifices a bit of straight line steadiness on the highway. It’s a small sacrifice, and one that’s certainly worth making. The automatic wipers worked at just the right speed, surprisingly. The identically-powered and gear-ratioed CX-5, a bit heavier than the 6 in this loaded, all-wheel-drive trim, felt at least as punchy as the sedan. Which is to say not quite as punchy as I’d like, but nearly. Perhaps I’d be more keen to push my foot down a little harder if the four cylinders operated with a little less clatter.

The CX-5’s opportunity to shine came at the exit from Highway 118 to Waverley Road. There’s a winding, sweeping, downhill ramp connecting the two roads, and the days I’d already spent in the CX-5 assured me that the Mazda could be pushed harder down this ramp than any RAV4, CR-V, Santa Fe, Journey, or Equinox.

Only my tentativeness in the slippery conditions held the Mazda back – the CX-5 had not approached its own limits.

Unfortunately, not long after this, I looked down at the passenger footwell and did not see my sneakers. My sneakers were by the door. At GCBC Towers. 25 minutes away. I was already cutting it close for our 11:30 meeting badminton time. I still needed to stop for Powerade.

So I listed my three options aloud. First, tell them I can’t play. Second, go home and get my sneakers. Third, find a store and buy the cheapest pair of sneakers I could find. 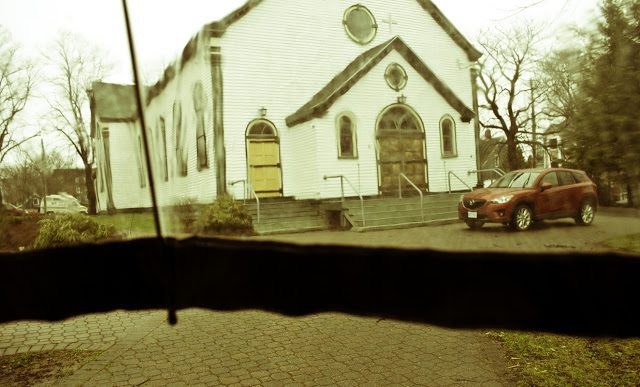 The first option was a no-go. Badminton doubles doesn’t work with three players. The second option would make me an hour late. I’ve never been an hour late for anything, ever. The problem with the third option? I was in Fall River, not exactly Kittery of the north.

I whirled around in the Sobeys parking lot and headed back toward Highway 102. The on-ramp from Waverley Road onto the Bi-Hi has a sweeping right, then sweeping left, and then a tighter right that requires plenty of speed on the exit if you’re going to safely merge onto the busiest highway in Nova Scotia. 184 horsepower in a 3500-pound crossover wasn’t going to provide me with a sudden burst of acceleration out of the final corner. And these weren’t normal circumstances. I needed to shave tenths. I had five minutes to drive ten kilometres, buy a pair of sneakers, and then drive another 13 kilometres.

I couldn’t afford the $200-$300 speeding ticket that would arise from getting to Bedford Commons too quickly, but I could maximize my rate of progress in corners. It’s not just the CX-5’s grip that helps here, it’s the communication. The messages are sent from wheels to steering wheel, and most of all, from wheels to the proverbial seat of my pants. It’s wonderful, not because you can’t find this experience in some other passenger cars, but because you’re driving a vehicle which, like all small crossovers, traces its ancestry back to the Geo Tracker.

Small SUVs certainly aren’t what they were a decade ago when the Tracker left us; they’re vastly different than when the Suzuki Sidekick kickstarted things more than two decades ago. The CX-5 is 16 inches longer but almost an inch shorter than the 2004 Chevrolet Tracker, and cargo capacity is 46% better in the Mazda; 29% better when rear seats are folded.

But the Mazda, though longer and wider and taller than the latest Honda CR-V, isn’t as spacious inside. The CR-V has three more cubic feet of cargo capacity than the Mazda; six cubic feet more when rear seats are down. Those differences are noticeable. The CX-5 isn’t especially roomy in the rear seat, either. Comparisons matter little if the Mazda is big enough for you, but if the far less stylish CR-V is only just spacious enough, the Mazda won’t be. 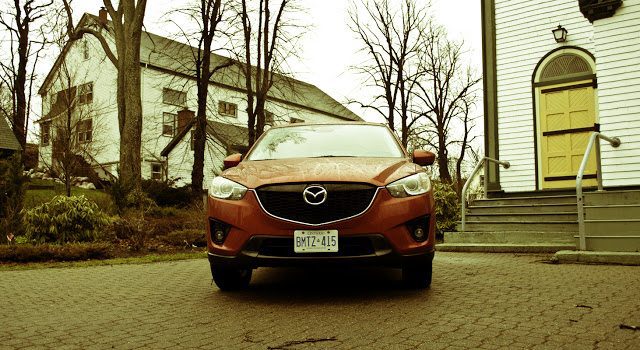 Finally at Wal-Mart, a store hidden by dense fog, I parked in the gravel along the side wall, speed-walked to the back aisle, selected the first $20 pair of sneakers I could find, paid at a DIY cash register, and tried to back out of my stupid parking spot without running into something. These top-end CX-5’s have backup cameras, but that’ll only show you what’s in the viewfinder. Unfortunately, checking your windshield-mounted mirrors and craning your neck won’t reveal much more than that in the CX-5. Visibility, even when doing simple blind spot-monitoring-aided shoulder checks, is poor. Left eye, meet B-pillar. B-pillar, meet left eye.

But I had badminton promises to keep and miles to go and on-ramps to kill and off-ramps to take before I could worry about the CX-5’s NVH, fuel consumption, and poor visibility. 20 minutes late, I arrived to be told my warm-up would be brief. They didn’t act insulted, and I didn’t tell them why I was late and why my sneakers looked so much newer this week. I didn’t tell them that had I been driving any other entry-level SUV I would have been 20:02.03 late. They’re minivan drivers, and they wouldn’t have understood that the moderately-powered CX-5 got me there as quickly as it did with handling prowess, rather than Pentastar potency.

I would also have been acknowleding that I forgot something. Personal forgetfulness, that’s one of the things I hate more than being late.

The Mazda CX-5 can help with the lateness, but there’s no high-tech seatbelt-like chime available that dings to tell you that your sneakers are still in the house.