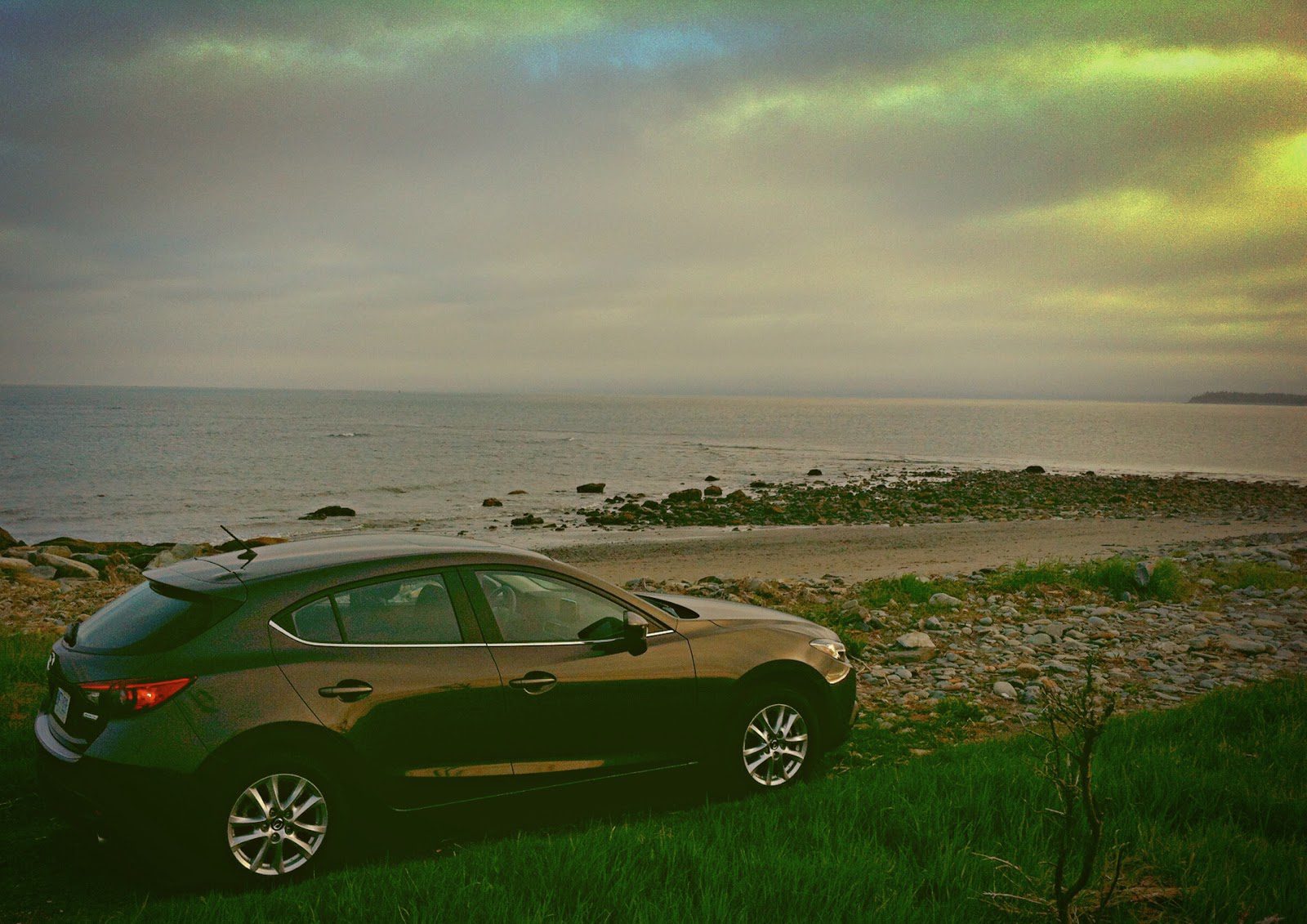 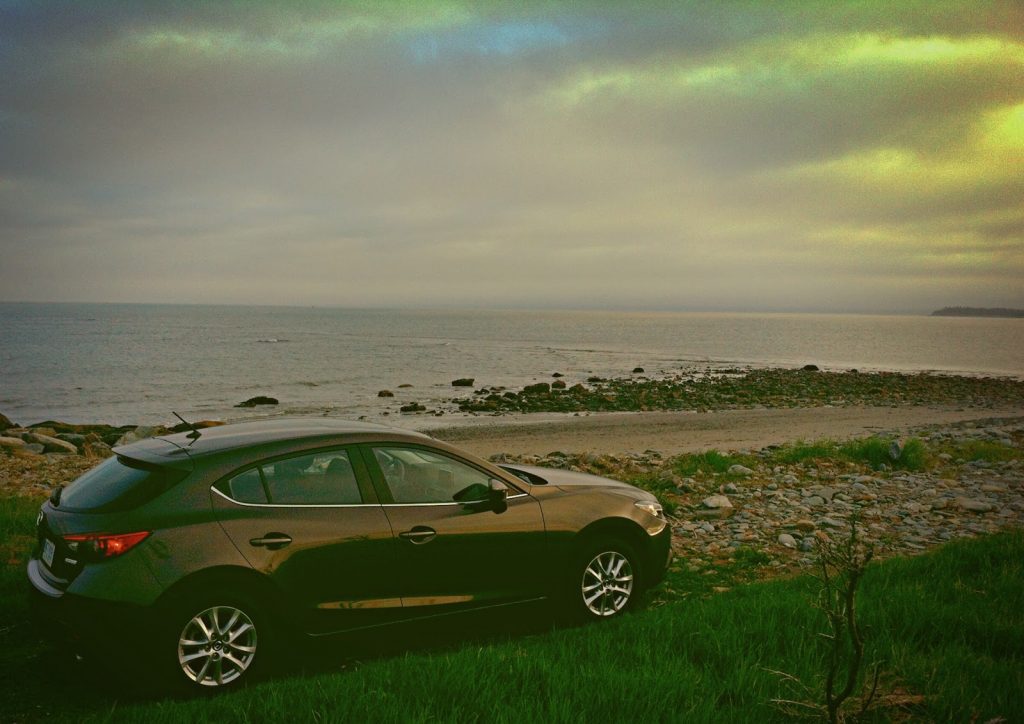 Every year at Christmastime, GoodCarBadCar releases a list of the twelve new cars I’d like to park in my driveway. They’re called The Good 12. The most recent list, revealed five months ago, included the 5-door 2014 Mazda 3, the third-generation of Mazda’s Protege successor.

This reveal occurred one day after GCBC published a review of the new Mazda 3, a review that carried a ringing endorsement: “The new Mazda 3 is the best compact car you can buy.”

But that 3 hatchback, the Sport as Mazda Canada calls it, was kitted out in GT trim. GTs are equipped as standard by Mazda with the more powerful 2.5L four-cylinder engine. 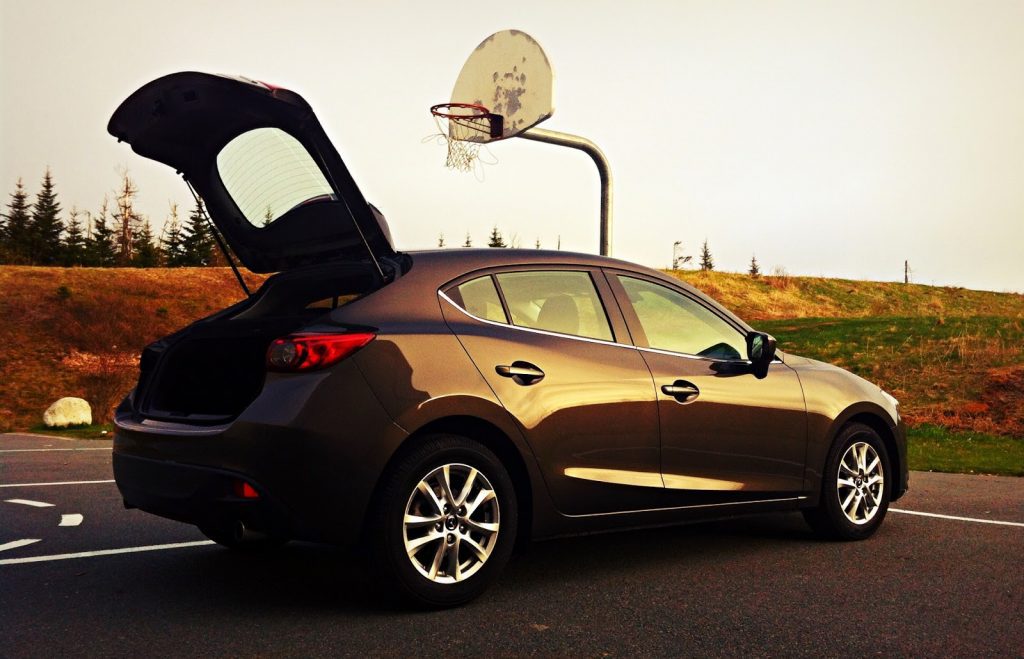 But Mazda is confident, and after showing off with the excellent 2014 3 Sport GT, they’ve now sent this Sport GS to GCBC Towers. It’s decently equipped, but it doesn’t feature the GT’s more alluring exterior additions, nor does it generate the GT’s 184 horsepower.

The ringing endorsement does not change. The Mazda 3 is still the best compact car you can buy.

Skip this car’s sunroof to save $1200. Then take Mazda’s excellent manual transmission rather than this car’s automatic to save another $1200 and you’re looking at a very nice, very efficient $22,890 hatchback.

Regardless of trim, the 3’s chatty chassis gives its driver a real sense of connection, the kind of communication you won’t get in a Civic, Elantra, or Corolla, the only three cars which sell more often than the 3 in Canada.

This 6-speed automatic is geared to extract the most amount of mileage from a litre of gasoline, and that restricts the feeling of power generated by the 2.0L 155-horsepower four-cylinder.

It’s not what you’d call a slow car, not at all, but there’s a sense of urgency you’ll often find even in lesser-powered cars that’s missing from this 3. If you want the bigger engine, you need to spend at least $28,550. Volkswagen’s Golf GTI starts at $29,390.

Still, there’s little need to accelerate hard out of corners, since you the Mazda 3 makes it possible to carry a great deal of speed through the corners. Without the GT’s 18-inch wheels and that car’s broader contact patch, I expected to notice a loss of grip, but that slight loss serves to highlight the 3’s inherent playfulness.

To have this car and not toss it around a twisty road a few times a week is like having a dog that’s not given daily opportunities to tug on a rope. That the 3 handles well is fine. That it handles so well while engaging its driver is the real gift.

Mazda Connect continues to be my favourite infotainment system. A central control knob in front of the armrest is simple to use, and it’s surrounded by quick menu buttons for music, favourites, navigation, the home screen, and the previous screen, alongside the volume knob, which is surprisingly well-placed.

We should all write letters to Mazda’s competitors asking them to just copy this setup and be done with it. Get rid of all the confusion, the slowness, and the low-mounted screens.

Mazda’s 3 is not perfection. There’s an annoying amount of road noise coming through the Yokohamas, and the rear doors feel a bit flimsy, typical for a car in this category. But the pervasive sensation is one of solidity. There’s room for four, and surely these seats work for some people, but none of the cushions hit my body in the right place. Radio reception is poor, and audio quality isn’t great at the best of times. Cargo space is more plentiful than the sloping tailgate would lead you to believe – I easily loaded a new toilet into the 3 at Home Depot – but a less stylish slope would enhance usability.

This car is crying out for one of three things, or a combination of all three: first, Mazda could reduce the tires’ profile. The 60 aspect ratio is suitable for the CX-5, not the 3. Mazda could also make a 17-inch upgrade available. As it stands now, the 3 GT comes standard with a wheelwell-filling 18-inch wheel, but the GX and GS appear under-rimmed on 16s. Or the designers employed by automakers could realize that the majority of the cars sold won’t be rolling on oversized rims, and their wheelwells could be shaped more in keeping with the wheels with which most customers end up.

It’s a small issue in the grand scheme of things, an issue that plagues many cars, but it’s exaggerated in the 3, and it cheapens what may be the segment’s most stylish car.

Fortunately, even when cheapened in appearance, the 2014 Mazda 3 still manages to come across as a $30K car that just happens to cost $25K. Too many of the Mazda’s competitors feel like they’re worth a little less than they actually cost.