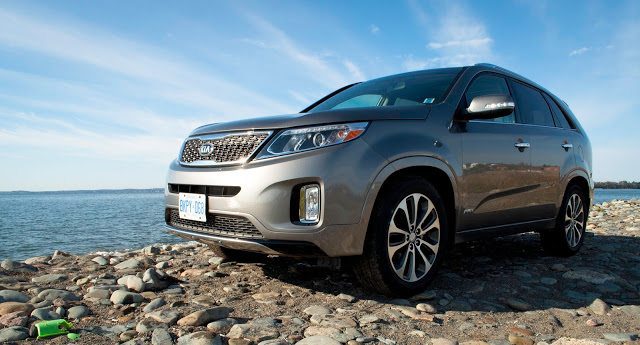 GCBC’s tester last week, in high-end SX trim, with a 3.3L V6 and all-wheel-drive, was indeed parked alongside a 2012 model all week, as GCBC’s usual photographer owns one herself. What in pictures looked like striking similarity looks in person to be a very nicely executed detail update and more of a similarity in silhouette.

Headlights, grille, and taillights headline the changes, but the whole body appears cleaner and certainly more handsome than the already attractive model that Kia marketed so successfully in the U.S. and Canada for three years.

However, the Sorento’s under-the-skin changes are much more effectual, and I fear that a cursory glance at the 2014 Sorento will not alert consumers to the fact that there’s a very new, very good Sorento in Kia showrooms.

491,137 Kia Sorentos have been sold in the U.S. and Canada in the 45 months leading up to October. Owners who were accustomed to the 2011-2013 model won’t feel out of place in the 2014 Sorento, but they will enjoy nicer textures; improved button, switch, and knob quality; and some ergonomic improvements.

Remember how the slightly cramped second row didn’t slide? In terms of leg room it’s still slightly cramped, but now it slides. (The third row isn’t the easiest to access, only provides space for the smallest of children, and severely restricts cargo space, three character traits of most small and midsize crossovers with three rows.)

Kia’s Supervision gauge cluster continues to impress both in terms of style and legibility, and the UVO interface, while rarely understanding my voice, offers a fast-acting touchscreen, quick access buttons under the screen, and plenty of welcomed, redundant climate and audio controls which operate conventionally. 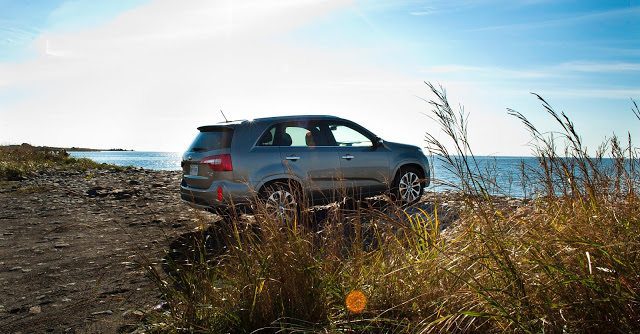 Comfort up front, particularly in an SX model with heated and cooled leather seats and a heated steering wheel, is perfect for my lanky frame. Visibility, aided by a rear camera that isn’t limited at night and by a blind spot monitoring system, is decent when looking to the rear and only feels narrowed by raked A-pillars that periodically hides the traffic which flows in a perpendicular direction.

ATKINS NOT NECESSARY
There are wholesale improvements in this updated 2014 Sorento’s driving experience. Ride quality is much less rough-and-tumble. With the improved ride comes improved agility, helped along by a loss of more than 200 pounds in overall weight. Thankfully, the Sorento makes no attempt to be sporty – comfort is a high priority. Yet even simple manoeuvring through parking lots is more enjoyable in the new Sorento. And cornering will be, as well.

Steering is something of a letdown after experiencing the heavily-weighted outgoing model’s rack, despite the inclusion of Kia’s three-mode FlexSteer system, which mostly sucks. Comfort mode reveals a wheel that wallows. Sport mode manifests the same sort of feeling with which I failed to take a liking in the Kia Rondo, where the wheel almost sticks in what almost feels like volume knob subsets. Ick.

In between, Normal mode feels more normal but is too light for my tastes. Nevertheless, Normal is likely where you’ll leave it. 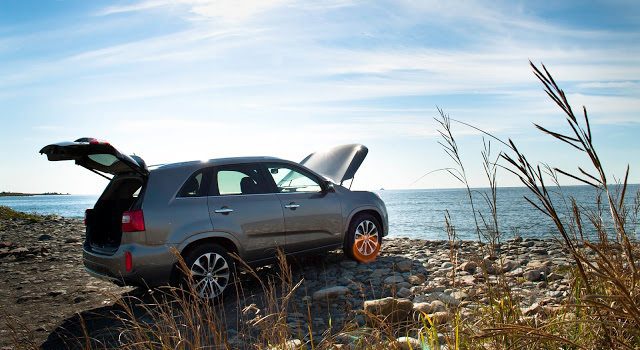 MORE AND LESS
Of course, the V6-powered Sorento’s nature is sporty when it comes to acceleration. Each of the 3.3L’s 290 horsepower must propel just 13.4 pounds, down from 15 pounds in the already swift 276-horsepower, 3.5L-powered 2013 Sorento. (Base Sorentos use the carry-over 2.4L, 191-horsepower four-cylinder which returns an excellent average of 9 L/100km, or 26 miles per gallon, in the mix of urban/suburban driving completed by GCBC’s photographer in her front-wheel-drive 2012 Sorento.) 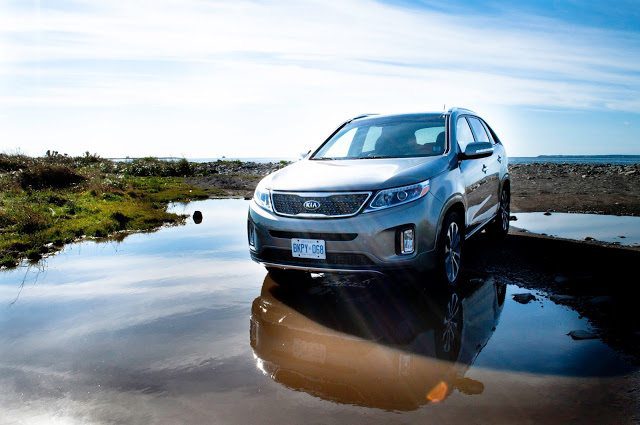 Canada’s best-selling SUV, the Ford Escape, is at its most powerful when equipped with a turbocharged 240-horsepower 2.0L four-cylinder. 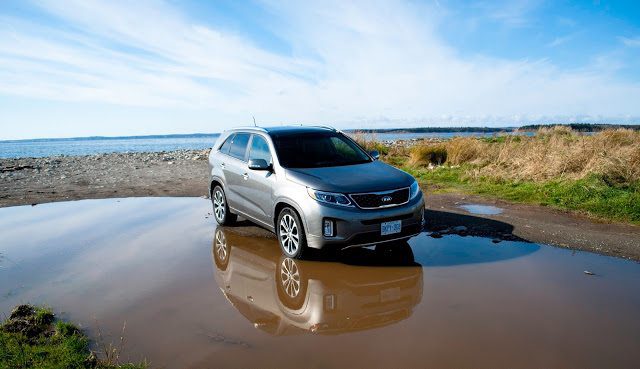 Our standards for fast cars have changed, yet the Sorento V6 is undoubtedly still a quick SUV. More than just the power, the V6 makes a pleasing (muted) sound and is naturally much, much smoother than the 2.4L. And you don’t need to jump up to the SX’s asking price to drive home in a V6-powered Sorento. Basic LX-trim front-wheel-drive Sorentos with a V6 start at $31,160, delivery included. They’re not poverty-spec. 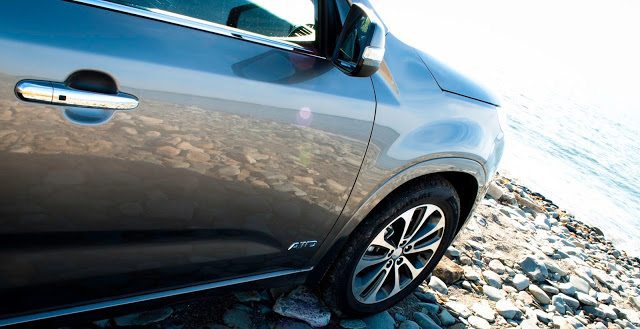 TWEENER
It’s not just the 2014 Sorento’s 290 horses that place it in a slightly different category than small crossovers and SUVs like the Ford Escape, Mazda CX-5, and Honda CR-V. Although it’s priced very much in line with those vehicles, it doesn’t drive as small or as car-like as they do, with a bit of jounce that reminds you of the 2013 model, which had yet more trucky jostling that reminded us of the first-generation Sorento. It has lost a lot of weight, but the 2014 Sorento still doesn’t feel as tossable as the Escape or CX-5, although that’s part of what makes driving it quickly a fun challenge through roundabouts.

The popular Sorento is bigger than North America’s best-selling SUVs: half a foot longer than the Escape, for example, and nearly three inches wider than the CR-V. There’s more seats-folded cargo capacity than you’ll find in the Escape and CR-V and more overall passenger volume, too. The Sorento doesn’t measure up to the Ford Explorer or Honda Pilot, however, which offer more space within greater exterior dimensions.

GOLDILOCKS
That’s part of what makes the Sorento so appealing: not too big, not too small, and certainly not too expensive.

Then again, with a feature load that would shame German SUVs at the same price, the 2014 Kia Sorento SX is a beast that’s out of reach for most Sorento or Escape buyers and more than likely not of interest to buyers of, say, the Mercedes-Benz GLK350 or BMW X3.

On the other hand, Kia keeps introducing higher quality cabins. Now they’re adding superfluous horsepower. Kias often look better than the vast majority their rivals. As a result, a Kia like the Sorento SX, even at $43,760, is unquestionably a more viable candidate for your luxury SUV dollars than any of us anticipated it could be just two or three years ago.