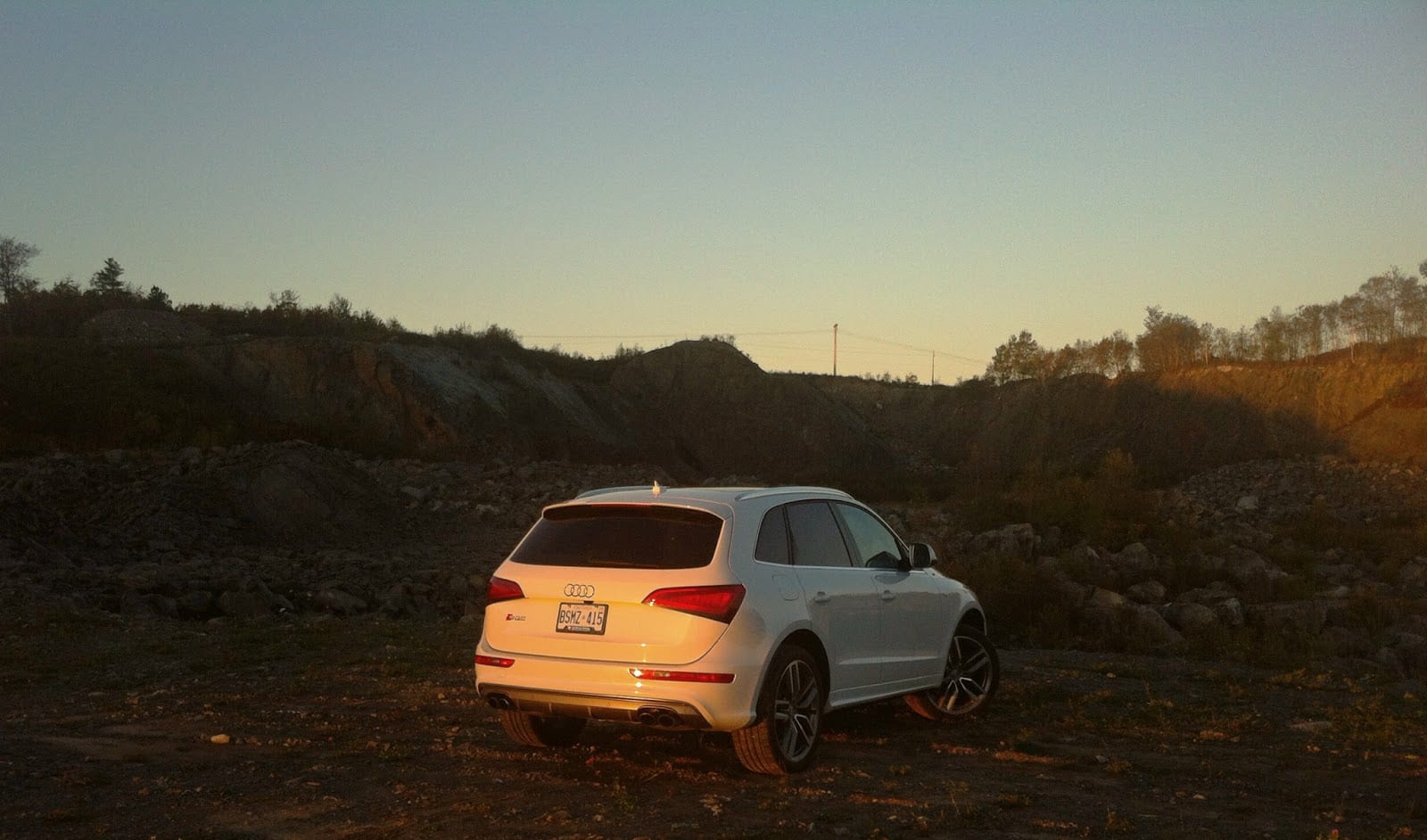 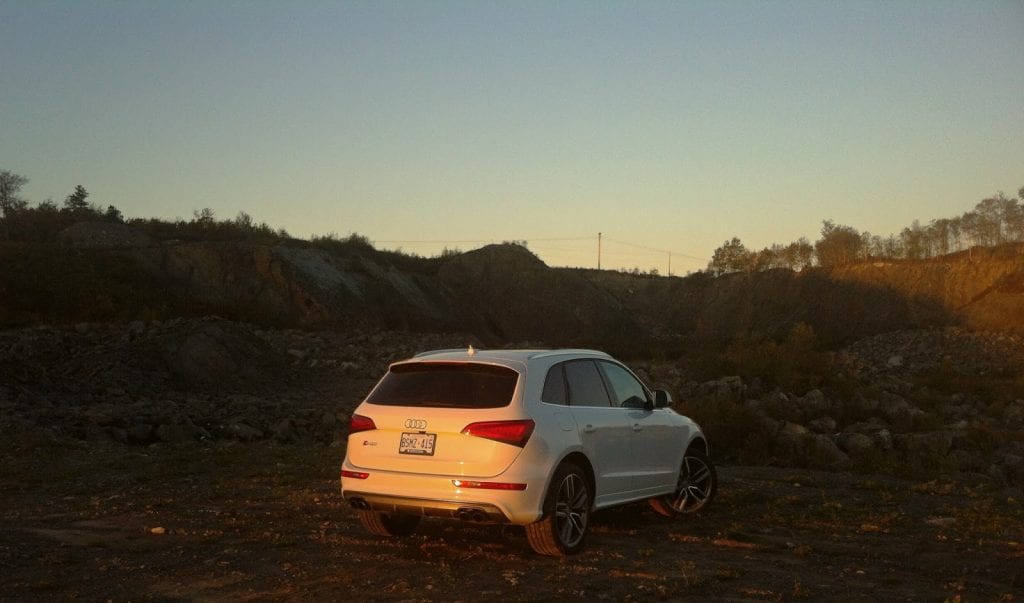 The number of double-takes was odd, I thought. In the summer, with the top down in a red Camaro ZL1, rubberneckers are a dime a dozen. But the SQ5 is a subtly enhanced version of the Audi Q5, a small crossover that’s been around for more than five years; the top-selling premium brand utility vehicle in Canada in 2014.

Sure, this one has optional 21-inch alloy wheels, valued at $1000, but are big wheels enough to cause the majority of passersby to turn for another look?

Ah yes, the noise, that’s what did it. Audi’s supercharged 3.0L V6 does have the tendency to bark melodically, particularly when Audi Drive Select is used to switch engine noise (along with engine/transmission and steering) to Dynamic mode, up a notch from Comfort and Auto. Added to that was the 14-speaker Bang & Olufsen sound system, which was used extensively at wake-the-neighbours volume. How civilized.

Less civilized is the amount of understeer and the way that understeer is encountered prematurely. Yet that’s only a surprise because of the dynamics manifested by the SQ5 most of the time – it’s not a high-riding SUV that you drive like an SUV. At all. 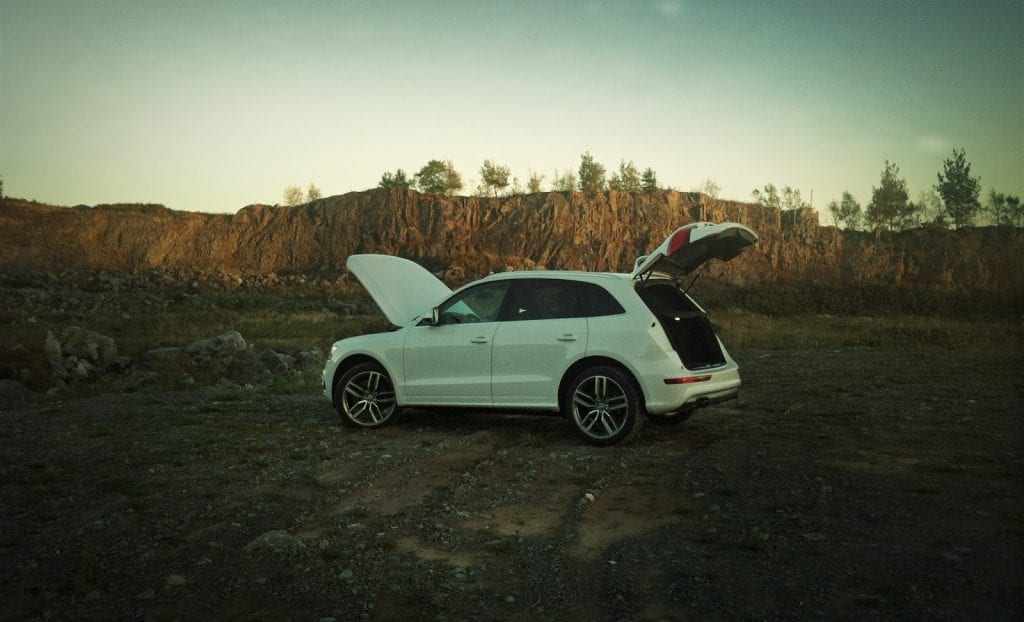 Naturally, when taking corners like the TTS you forgot it wasn’t, the SQ5 plows sooner and with more disconcerting pressure on the outside front tire than you expected. After all, you forgot you were driving a 4400-pound, 65.3-inch tall utility vehicle, not a 3858-pound, 55.4-inch tall S4.

That you could forget something so obvious is a testament to the SQ5’s overall balance. Of greater interest to those who prefer the SQ5 over conventional Q5s like the 220-horsepower 2.0T and 240-horsepower 3.0L TDI because of the SQ5’s rate of acceleration, ride quality is firm but compliant over the worst roads, if slightly busy in routine driving.

But what acceleration it is. The SQ5 is less expensive than other hyper-quick SUVs, the AMGs and M-badged BMWs, less costly than the Jeep Grand Cherokee SRT, as well. Audi’s supercharged 3.0L, with 354 horsepower and 346 lb-ft of torque, is mated here to an 8-speed automatic, not the 7-speed dual-clutch from the similarly-engined S4.

Not at any moment do you feel as though the meat of the power band is located elsewhere, although Comfort mode does seem to use very economy-minded programming for the 8-speed auto, refusing to drop down a gear without a real kick in the pants.

Audi’s famed Quattro all-wheel-drive means firm prods of the throttle always result in instantaneous forward motion almost regardless of surface. (We’d strongly recommend something other than 255/40R/21 Dunlop SP Sport Maxx GTs if you’ll be driving in snow. Nothing kills the benefits of all-wheel-drive quite like skipping out on winter tires.)

All the while, SQ5 pilots are ensconced in a typically classy Audi interior. There are letdowns. For starters, the interior doesn’t feel fresh, perhaps because of the overarching darkness. Even the optional aluminum inlays ($1100) don’t spice up the ambience. I wouldn’t say the SQ5 offers luxury-like silence, either, with wind noise being rather prevalent.

There are a number of blanked-out switches in prominent locations, too, which always causes you to wonder what you’re missing out on after spending $68,695. Audi’s MMI is simple, though, with shortcut buttons spread around a central control knob, and everything feels so very expensive. As it ought to. 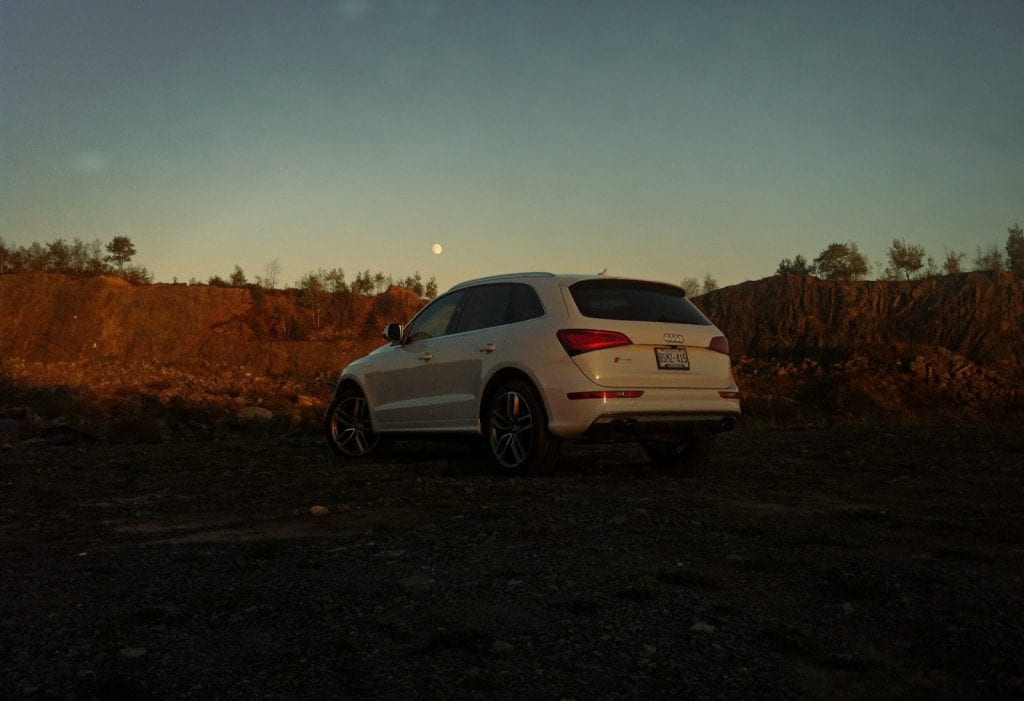 Rear seat space does not stand out, not for its snugness or its abundance of space. Yet cargo dimensions are a letdown. The Q5 is 183 inches long from bumper to bumper and 75.2 inches wide. That’s nearly five inches longer and nearly four inches wider than the Honda CR-V, but the CR-V offers 24% more seats-folded cargo capacity and 28% more space behind the rear seats. The SQ5 remains a flexible cargo carrier, but the sloping roof which helps to make all Q5s so handsome reduces the SQ5’s ability to take a young family away on vacation.

The SQ5 is not alone in this luxury crossover cargo conundrum: GLKs and X3s are also down on luggage capacity compared with America’s similarly-sized top-selling utility vehicles. 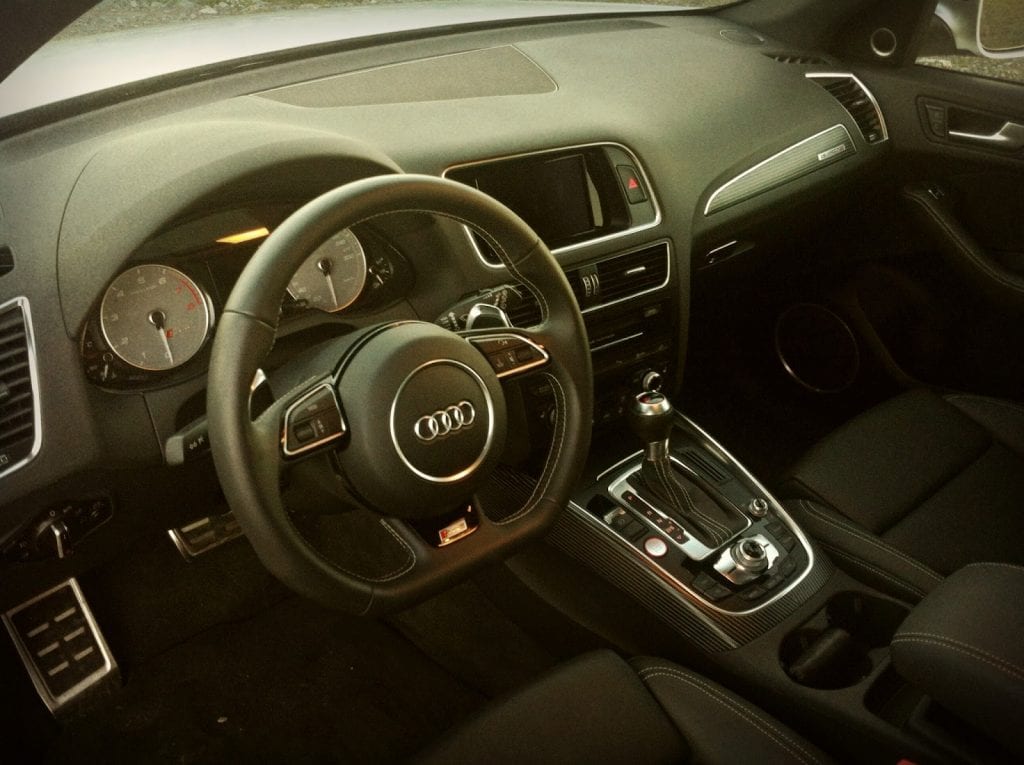 The Audi SQ5 is the fast Q5, an older and popular vehicle, and thus a common vehicle. It’s also tiny in the back and, not unexpectedly, quite a guzzler. We averaged 12.6 L/100km during the week Audi Canada allowed the SQ5 to visit our driveway, in keeping with its ratings, and appropriate if it were a pickup truck. Fortunately, Audi adds a healthy dose of standard equipment to the SQ5’s performance credentials, the kind of stuff we often see on premium brand option sheets: panoramic sunroof, power tailgate, three-zone automatic climate control, keyless access, twelve-way power seats with driver memory.

One could make an argument that with this amount of power, unavailable in the Q5’s direct rivals, and this level of equipment, the SQ5 is making an overture to the value-conscious corners of our brains. Meanwhile, the SQ5 is also playing another tune, courtesy of Bang & Olufsen and a supercharged 3.0L, in order to tug on our heartstrings.