There’s a part of me that believes everybody wants a truck. There are many people who will vehemently deny it. There are many others whose purchases lead you to believe they clearly couldn’t have wanted a truck. And there are yet more individuals who want a truck but are under the impression that truck purchases drive us too quickly past peak oil, and so they buy a hybrid Lexus LS instead.

Periodically, however, consumers in those three groups comes over to the dark side. And when they do, they’re looking for a pickup a lot like this one: a family car with miniature trunks in the side of its bed, loads of features, a limo-like rear seat, suspension that drops for easy entry, and the promise of a new kind of truck fuel efficiency.

When fitted with Chrysler’s Pentastar 3.6L, the four-wheel-drive Ram 1500 Outdoorsman Crew Cab is a viable naturally-aspirated V6 pickup truck. For the times they are a-changin’.

Chrysler Canada sent a near-$50,000 Ram Outdoorsman to GoodCarBadCar for a week in early June. Although the overall package left me hugely impressed, the Ram’s V6 did leave me thinking that not paying the same amount for a 5.7L Hemi V8 would be a missed opportunity.

GOING
Seen in everything from the Chrysler 200 to the Jeep Wrangler, Chrysler’s omnipresent V6 is married here to an 8-speed automatic. And that 8-speed is the reason why a Hemi doesn’t cost Ram buyers any extra coin: the V6 can only be paired with the 8-speed; the 5.7L V8 can be had with a 6-speed automatic or the 8-speed, but the 8-speed drives the price up by $1000.

Why do you want the V8? It’s not a question of the V6 generating too little power. This truck is much, much quicker than the one your dad drove when you were a kid. But the power is generated in a somewhat Honda-like manner. All 305 horsepower isn’t produced until 6350 rpm and the full 269 lb-ft of torque doesn’t peak until 4800 rpm. The Hemi V8, meanwhile, makes all of its 395 horsepower at a lower 5600 rpm, and the extra 138 lb-ft of torque it generates arrives at 3950 rpm. That’s why the Hemi feels like a truck engine and the V6 – though completely sufficient, tremendously smooth, wonderfully quiet, and very punchy as speeds and revs rise – feels like it was made for an Accord.

TURNING
Hop out of a Golf TDI with a sporty suspension setup into the Ram, as I did, and you should naturally find that the truck feels ponderous. Slow steering, poor brakes, uncomfortable direction changes, a jouncy ride, and more body roll than a daily McDonald’s eater.

Don’t compare a Golf, any Golf, to a pickup truck. (Although my whole review of the Jetta TDI is based on its pickup-likeness.) However, if you haven’t driven any of the most recent Detroit pickup trucks, you’ll be more than a little pleased by the consistent steering, firm brake pedal, surprising mid-corner adjustability, bump-ignoring ride quality, and, well, there is actually a truckish amount of body roll. Presumably, that last part can’t be helped.

Simply put: trucks with wheelbases which stretch across three postal codes and display an eagle’s view of the road ahead are the ultimate highway cruisers and, in the case of this Ram, possess the kind of manoeuvrability and comfort which make the urban real world livable.

LIVING
Crew cabs aren’t quad cabs, not at Ram. This Crew Cab’s doors are extra long, and they open up to reveal a massive cabin, one with storage cubbies under the seats and floor and everywhere else. Worsened in part by the useful RamBoxes on either side of the bed, this huge cab does dramatically shrinks the truck’s ability to be a truck. Sheets of drywall you shall not carry.

Up front, the seats and centre console are expansive, although the armrest formed by the centre console didn’t please my elbow, nor did my elbow please the deteriorating armrest. But the overall quality of materials is superior to what you’d expect, and the overall layout makes a mockery of the space “efficiencies” in small cars that actually need space solutions. The Ram doesn’t need space-saving solutions, but the rotary shifter knob (instead of a lever) and vents which don’t overwhelm with lengthy grandeur and buttons which are only just big enough to easily handle makes the Outdoorsman feel even bigger inside than it really is. It’s huge inside, mathematically. But it feels even bigger than that.

LOOKING
I’m supposed to say that the Ram is the best-looking pickup truck on the market, subjectively. But I find it too hard to imagine that the term “subjective” is necessary. Incidentally, an FX4 trim Ford F-150 is handsome, as are the new 2014 GM trucks. The new Toyota Tundra face is certainly masculine, in a bearded kind of way. But in a very evolutionary way, over the course of two decades, Chrysler continues to improve the way the Ram looks. It’s been the segment’s exterior design leader for many years.

COMPETING
In Canada, the Ram Pickup is the second-best-selling vehicle line overall, trailing only the F-Series while outselling the GM truck twins combined. Is the availability of a powerful V6 engine going to help it hold its place? For a fully flexible lineup, the Ram certainly needs Pentastar availability. GM’s new V6 in the 2014 Silverado and Sierra will be punchy and efficient, as well, and the best-selling F-150 majors on V6 excellence in naturally-aspirated and twin turbo form. What the Ram does that the Ford can not do is appeal to buyers who don’t want a Ford. Everybody drives an F-150. (More and more everybodies now drive a Ram.) But even with its outrageous popularity, the Ram is still perceived as a unique choice. That’s not a bad thing. 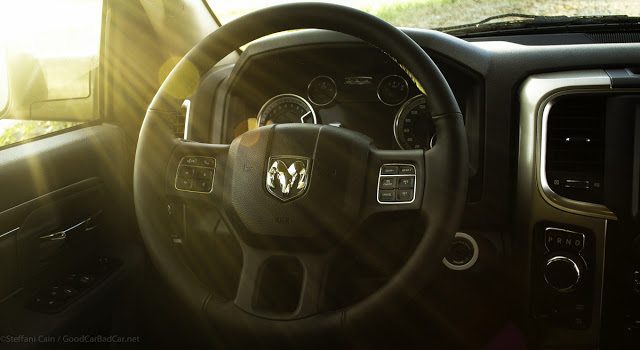 SIPPING?
GCBC’s week in a Ram 1500 Outdoorsman Crew Cab V6 4×4 resulted in the consumption of 14 litres per 100 kilometres, equal to 17 miles per gallon, ever so slightly better than what the EPA says the Ram V6 4×4 can do in the city, which is where most of our driving took place. Our Ram tester was green, not in colour but in freshness, so you can expect efficiency to improve with age. While visiting GCBC, the Ram V6 wasn’t driven in a way that would maximize economy. If it had been a Hemi, it definitely would have been driven with yet more verve, and perhaps it wouldn’t have achieved its estimated 15.7 L/100km (15 mpg) rating. I still suspect I would have preferred the extra power, not because the V6 wasn’t acceptable – it was – but because the penalty for choosing the V8 doesn’t feel all that punitive.

Other than that, and the fact that I would prefer a truck with less rear seat space, a less malleable armrest, a bigger and wider bed, and fewer options (like the really good $1500 adjustable air suspension and a heated steering wheel and a remote start system and navigation and a universal garage door opener, $7935 in options overall, including useless and intrusive $850 side steps), I don’t really want Chrysler to change anything about this Ram Pickup. High praise.

But minds, like the times, are a-changin’. So don’t speak too soon, for the wheel’s still in spin, and there’s no tellin’ who that it’s namin’.