During the years in which Mazda has been producing the MX-5 Miata, the length of presidential speeches to Congress has ranged from 35 to 84 minutes.

Somehow, back when Mazda’s credo of jinba ittai was completely literal, Abraham Lincoln managed to sum up so much more, and with far greater eloquence, by speaking for just two or three minutes.

In humility and solemnity, as a memorial and a eulogy, Lincoln’s ten sentences at Gettysburg challenged and inspired, addressed the profound themes of human equality and war, and sent out a clarion call for American liberty and freedom.

This is where you start wondering if I’m about to publish a ten sentence/270-word review on the retractable hardtop Mazda Miata. Faithful readers know that’s not going to happen – GoodCarBadCar published almost 1200 words on the Kia Cadenza earlier this week. Nor am I going to liken myself to Abe Lincoln. 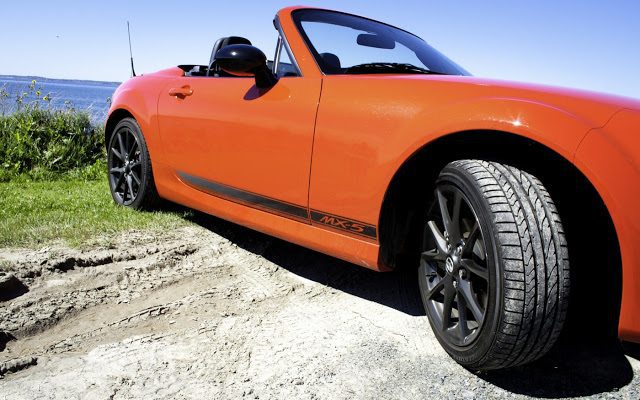 Complicated things can, however, be simplified. If Lincoln could manhandle extraordinarily complex subjects into a few concise and straightforward paragraphs; if Mazda can take the same core elements that result in a Mercedes-Benz S-Class but manage to boil away all the frivolity, then can’t a review be forthright and unvarnished?

Here goes: the 2013 Mazda MX-5 represents everything that is good about cars.

No, when we’re discussing the MX-5’s goodness, we’re talking most often about its man-machine interface, its machine-road connection, its hair-wind encounter.

It does not have many weight-adding features, even in this GS trim. There are no cameras monitoring lane lines, no chunky touchscreen. The stereo only has four speakers. The seats aren’t powered. The tires are relatively slim, 215s, on modest 17-inch alloys.

The MX-5 does not have much in the way of sound deadening, the results of which aren’t noticed when the top is down and sound assaults you from all corners of the world. But when the top is up, when you expect a measure of calm, there’s very little.

Disallowing rear seats, and the space where they would otherwise rest, provides what is perhaps the greatest weight savings of all. The MX-5 doesn’t have much in the way of length, height, or width. Tidy dimensions require precious little in the way of metal to cover everything up. 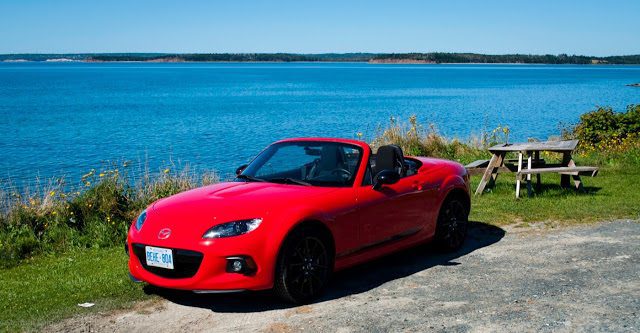 The Mazda MX-5 isn’t rock hard. Its structure is stiff, thankfully. And that, combined with Mazda’s awareness of the fact that we drive on real roads, led the company to develop a car with suspension that never disturbs its two occupants. At no point during the nine days in which the Miata visited GCBC Towers did the car strike potholes or frost heaves too harshly.

Mazda didn’t build a pretentious MX-5; the car doesn’t promise anything it can’t deliver. On dark wheels, with a black roof, black graphics, and red paint, GCBC’s MX-5 tester looks like an inelegant tuner had a role in its design. The 2.0L’s growl also signals a rate of impending acceleration that doesn’t quite match the noise. Still, the expectations for a two-seat roadster are limited in scope: we want the MX-5 to be nothing more than a driver’s car.

The best cars to drive are the ones that isolate, interfere, and inhibit in only the slightest of ways, in only a balanced fashion. It’s not that every message from the road is transferred via the MX-5 to the driver, as the MX-5’s depth of communication isn’t as vibrant as I’d hoped. But the information it does direct toward the driver galvanizes a sense of confidence in the driver and, it so happens, the Miata, too. Or so it leads its driver to believe.

The Miata is a sports car that generates 37% less horsepower than the MazdaSpeed 3, 138 fewer ponies than a basic Ford Mustang, and nearly 100 fewer horses than the Pontiac Solstice GXP. Yet it can be driven with the kind of vigour reserved for cars that have developed a deep and lasting bond with their owners. 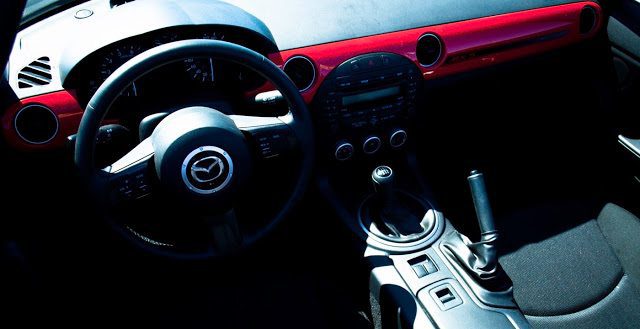 In the MX-5’s case, that bond forms instantaneously. The high-rpm shift into third gear is one of life’s great mechanical moments. As the rear end lightens and then slides in a 90-degree bend, you realize that the MX-5 isn’t out of control, it’s actually displaying the expanse of its control, as if to say, “Other cars would bite you here, but I’m friendly, and we’ll steady things in a moment.”

The thought of frustrating its driver with understeer is terribly foreign to the MX-5. Mazda taught its roadster offspring that surprising a driver with unexpected, twitchy steering would be ungentlemanly. 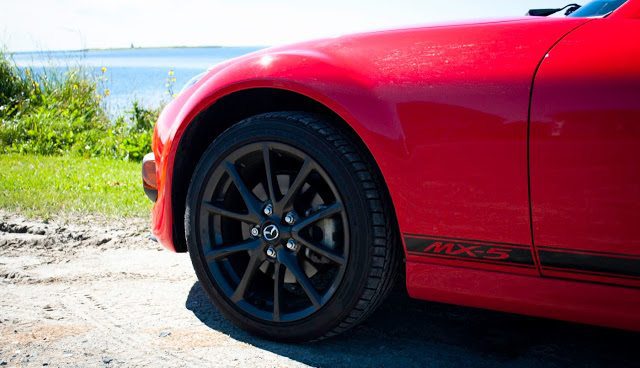 It’s not the perfect car. According to Mazda Canada, this example weighs in at 2606 pounds, 148 pounds more than the base car; 163 pounds more than a new MX-5 weighed ten years ago; nearly 400 pounds more than it weighed twenty years ago. It wears it well – I think the MX-5 looks better than it ever has – but the smallest Mazda doesn’t feel quite as light on its toes as it could, and the girth does impact the verve one would hope to experience when ho-hum compact cars are accelerating away.

More upsetting is the Mazda’s alleged thirst for premium gasoline. In a car that weighs only 2606 pounds, a 2.0L four-cylinder which is supposed to consume 11.2 litres per 100 kilometres is disturbing, not unlike a high schooler who’s drunk in public. (While in our safe keeping, driven mostly in the city, and mostly with gusto, the Mazda MX-5 drank at a rate of just 8.6 litres per 100 kilometres, equal to 27.4 mpg on the U.S. scale.) 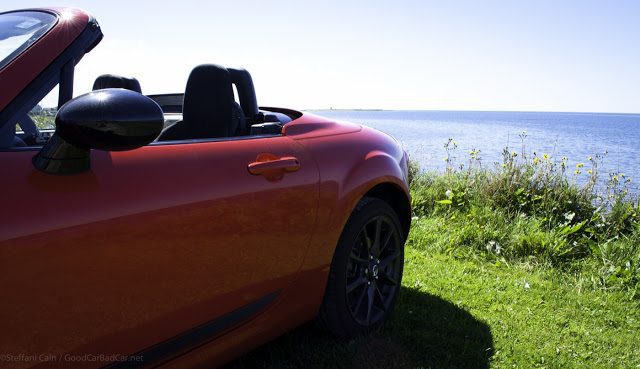 It doesn’t really matter, though. Oh, well the high school public drunkeness matters. It’s a real problem, actually. But the Mazda’s demerits – the dearth of interior storage, the gearing that leads to high-rpm highway cruising in sixth, the consumption – don’t really matter all that much. They’re bit players in a film that features an all-star cast.

Mazda nailed it with the first, second, and third-generation MX-5 Miatas. Based on the dynamics of the CX-5 GT and 6 GT, there’s no reason to believe Mazda won’t once again offer a thrilling drive in their inspiring roadster in 2015.

Theoretically, other automakers should also be able to do this. Affordable rear-wheel-drive roadsters are, nevertheless, thin on the ground. Gone are the Solstice, Sky, MR2 Spyder, S2000, and MG TF.

“That some achieve great success, is proof to all that others can achieve it as well,” Abraham Lincoln said. Mazda would beg to disagree.