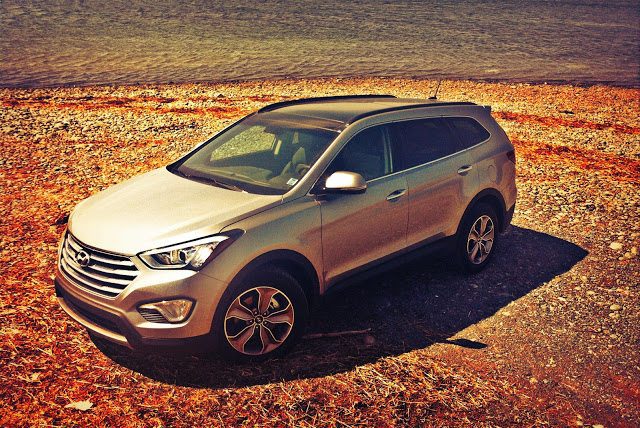 Car writers are often scared to let their automobile enthusiasm creep into their reporting on everyday vehicles. When reviewing minivans, we’re supposed to focus on the flipping and folding seat mechanisms. In a comparison test between flagship luxury sedans, we become hedonistically concentrated on massaging seats. Any examination of midsize sedans necessitates a long, hard look at rear seat space.

Yet here I am about to tell you that the 2013 Hyundai Santa Fe XL is enticing because of its horsepower. There are 290 ponies on offer, plus 252 lb-ft of torque. Like most of its rivals, the Santa Fe XL – known in the United States as nothing more than the Santa Fe – is fitted with a 6-speed automatic transmission.

Happily, the Santa Fe XL isn’t a heavyweight. All-wheel-drive versions, like the one GoodCarBadCar tested for a week, weigh less than 4100 pounds. Each horsepower is tasked with carrying 14 pounds. Ford’s Explorer makes 290 horsepower, as well, but it weighs nearly 4700 pounds. That’s 16 pounds per horse, same as what you’ll find in the outgoing Toyota Highlander and Nissan’s new Pathfinder. The Honda Pilot? 18 pounds per horse. 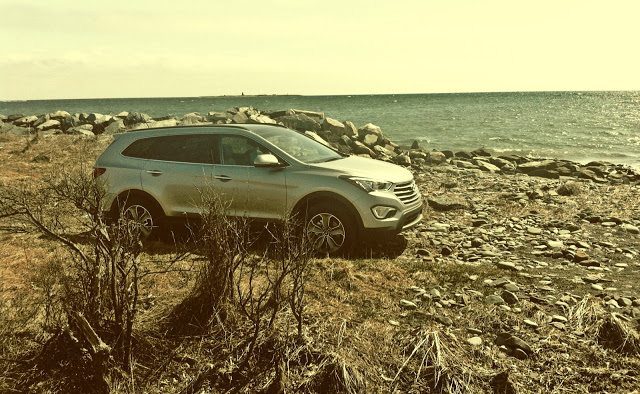 The Santa Fe XL’s hushed interior makes the car deceivingly quick. Once this much mass is moving, and the tachometer’s needle is halfway to the redline, and the 3.3L V6 still has more to give, I’m happy. Just off idle, the weight is felt. It takes some doing to get a seven-seater moving. The smoothness of the 3.3L’s delivery gives a V8esque sense to the Hyundai’s driver. Or maybe it’s the fact that there are 290 horsepower, the same output achieved by BMW’s 4.4L V8 ten years ago.

Don’t exaggerate the Santa Fe’s ability to hustle from zero to sixty. It’s not a 3.8L-powered Genesis Coupe. Your expectations set the stage. You expect the XL badge to bring with it an extra large Santa Fe. You did not, however, expect a three-row Korean crossover with an Active Eco indicator and a 115-volt cargo area power outlet, a crossover that starts under $30,000, to accelerate so pleasingly.

The problem with present power is that it inevitably promotes its own presentation, and does so in perpetuity. Along with the Santa Fe XL’s sub-2000 kilometre odometer and its chores being mostly completed in the city, the throttle’s unnecessary overuse prompted dreadful fuel consumption. At 15.2 litres per 100 kilometres – equal to 15.5 miles per gallon – the 2013 Santa Fe was nearly three mpg shy of the EPA’s city rating; nearly five down on the EPA’s combined rating.

Space and power more than make up for (but don’t automatically mask) some of the Santa Fe XL’s shortcomings. The third row is decently spacious, helped by a sliding second row, but access isn’t what it is in the Nissan Pathfinder, let alone what you’d enjoy in a minivan. In this $39,199 Luxury trim level, it’s disappointing to see the matte black plastic surrounding the HVAC and stereo controls. There’s a rearview camera, but the dash-mounted screen is sadly small.

While visibility isn’t as bad as it gets in smaller-windowed crossovers, the hood slopes away too sharply to know where the Santa Fe XL’s corners are. And let’s not kid ourselves about the Hyundai’s non-accelerative on-road capabilities: ride quality was the primary concern, not Laguna Seca laptimes. There are 4000-pound SUVs that handle and steer better, undoubtedly. 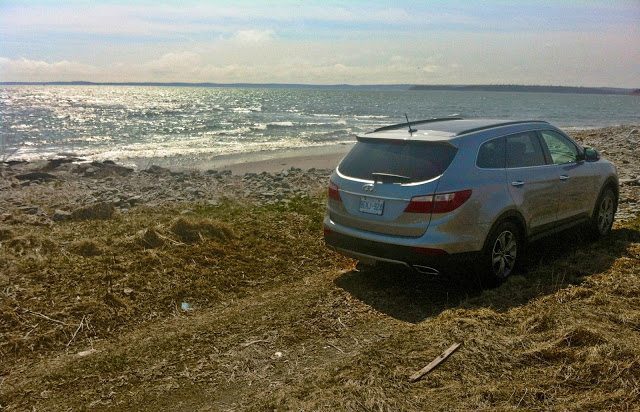 But the Santa Fe XL’s coping skills are honed well enough to almost keep up with the 3.3L V6. Almost. Essentially. Virtually. Nearly. Well, not quite. Not really. But when the steering is in comfort mode, you can whip this sucker around parking lots. Not that the selectable steering’s two other modes change much.

Not that it matters. We’re under the impression that buyers who would otherwise buy a minivan, buyers who now delve exclusively into the three-row SUV world, care only about practical issues like cargo tie-down hooks and latch anchor placement and Bluetooth sound quality. Hyundai clearly believes consumers are interested in extra punch for highway on-ramps, more shove for passing on rural two-lanes, and the simple knowledge that there’s power available, from revs of any number. They could have inserted a turbo four. They didn’t. Hyundai could have installed a lesser V6. They didn’t.

Hyundai gave us power. (And seven seats. And leather and a whole roof of glass, active cornering all-wheel-drive, power liftgate, and 5000 pounds of towing capacity.) Enjoy what you’ve been given. Just don’t enjoy it too much, because Hyundai’s not going to give you money for gas.