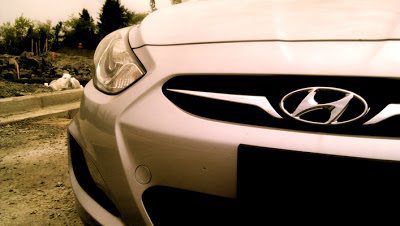 In the coming days and weeks, you’re going to hear plenty about a new small car that people will say is a cut above the rest. They’ll say it’s basically a miniature version of its larger brethren, the Elantra and Sonata, and a strong candidate for any new car buyer on a budget who demands quality, security, efficiency, and bit of performance. In this 2012 Hyundai Accent review, you won’t hear The Good Car Guy disagreeing with those claims.

In fact, complaints will only sound inordinately loud because the 2012 Accent does so much so well that its economy car roots squawk up from the background as past-their-prime soloists seeking the  attention they once received. Don’t let my apparent nitpicking deter you from recognizing the all-new Accent as the class of the subcompact field.

When it comes to the 2012 Accent, Canadian and U.S. trims differ in more than just name. Yes, the engine is the same, the full slate of safety equipment is standard, and the core architecural elements are identical. But the sedan pictured here is a mid-grade GL, not totally unlike the American mid-grade GS, but altered in a couple of important ways. Steering-wheel mounted audio, for example, is standard fit on the Canadian GL, as is cruise control. In the United States, the Accent GS sedan makes cruise an option and won’t make room for steering-wheel audio controls.

Both cars, however, should be indistinguishable on the road. With an awfully effective 138-horsepower 1.6L direct-injection 4-cylinder, 123 lb-ft of torque, a shift-if-you-want-to 6-speed automatic transmission, low rolling resistance 175/70TR-14s, and disc brakes all around, this isn’t the Accent you necessarily want to take to the dance, but it’s the one with which tens of thousands of new owners will leave. Read on after the jump for a full review of the 2012 Hyundai Accent GL Sedan Automatic as you wait for an upcoming Driven post on the more desirable 2012 Hyundai Accent GLS 5-door.

If at first it seems ludicrous to pay such close attention to the dynamic qualities of a $17,694 subcompact, try and keep a few things in mind: people who buy this car won’t just be sitting in parking lots. They’ll be driving. Driving generally involves going around corners (if you don’t live in Saskatchewan), coming to frequent stops (unless you live in…. rural Saskatchewan), and accelerating up to highway speed, unless you live in downtown Toronto, suckers. A buyer who can’t afford to spend more than $18K on a new car, or chooses not to, shouldn’t be stopped from enjoying the process of driving. And they won’t be. If the 2012 Accent doesn’t measure up dynamically, the fun Mazda 2 gains a victory.

Don’t be fooled by this sedan’s unpretentious badging. Hyundai. Accent. GL. C’mon, right? Well, I don’t want to call it fast. The term, “quick”, could only be used in tandem with, “relatively speaking”.  So let’s stick with perky and add especially on the front.

Especially perky. It’s a trait made more obvious by the 6-speed automatic’s willingness to get on with the job. Remember when automatics sucked? And then as automatics improved, they still sucked when paired with the wrong car or the wrong engine? And then automatics pretty much only sucked when they were poorly built or found in small cars? Earlier this week, The Good Car Guy was more than a little impressed with the Fiat 500’s auto tranny. The new Accent’s shiftable 6-speed was nearly that good, only slightly slower to shift; only slightly more economically-minded.

Accelerating past highway opposition users is easy enough in the Accent then, but how ’bout the on and off-ramps? Surely the Accent GLS’s 16-inch wheels and more aggressive 195/50HR tires will be a big help here, but the basic Accent setup – shared with the bare-bones Accent L – isn’t bad. Visibility out the front and to the sides helps. The Accent’s brakes are second only to the engine in terms of the car’s top talents, providing proper feel and bite. The steering also weights up nicely enough when diving toward a corner. But it’s there that you’ll notice the Accent’s first real letdown.

The self-centering effect we’ve been enjoying in steering systems is mostly missing from the 2012 Accent. At first disconcerting, this problem is eventually just… problematic. Annoying, but far from deal-breaking. It’s not as though we’re fighting with a lack of power assist here, it’s just the wheel’s unwillingness to return to sender. Add to this an odd resistance right around the straight-ahead. Some kind of extra sticky molasses must be coating the steering rack. While complaints are being formally filed, let’s deal with a handful of other issues.

First, visibility was fine out front and to the sides, but out back? That rear window is perfect for one of Halifax’s numerous harbour-side military bunkers. This is worsened because of the extraterrestrial antennae sticking up from the rear seatbacks. They’re constantly drawing attention to themselves with every glance you make at the rearview mirror, adding salt to the poor rearward visibility wound. I’ve yet to drive a 2012 Accent hatchback which could offer better angles out back.

Next up, the front suspension. It seemed a touch too stiff; the rear a touch too loose. Is this Hyundai’s way of compensating for the fact that most of the Accent’s (light) weight is on the front? Perhaps. Everything works well enough, but hit a bump mid-corner and things feel just a mite funny, and not in a ha-ha way. There’s never any sensation suggesting the back will step out, only that the two ends aren’t working in sync. Admittedly, you’ll be pushing pretty hard to get to a point where this response is felt.

Third, the Accent is a rather quiet car. The engine isn’t buzzy, wind noise is a whisperesque, and vibration is mostly absent. As a result, on the highway road noise is a constant roar. It’s as though you’re forever driving past 110,000 fans at Michigan’s Big House with your windows up. Hhhwwwwaaaaaahhhhhrrrrr, say it with me, Hhhwwwwaaaaaahhhhhrrrrr. That noise is always heard because, well, nothing else makes much of a peep.

Finally, the steering wheel rim is simply too thin. Holding the Accent’s wheel is like greeting people who were never taught to embrace with a firm farmer’s handshake. Not only do you feel like you’ll squeeze too hard and break something, you also get the impression that this embrace is unwanted.

Back to better news, the overall layout of the 2012 Accent’s interior is friendly and workable. All buttons and switches are easy to reach, both for taller and shorter drivers. An ideal driving position isn’t hard to come by because of the height-adjustable seat, although the wheel lacks a telescoping feature. The quality of materials is nothing special, but the use and placement of these materials makes the Accent feel a touch more expensive than it really is. Footroom in back is plentiful. Knee room is fine if the front seat isn’t configured for a 6′-tall driver and at least decent if the driver is lanky. Trunk space is abundant at 13.7 cubic feet, equal to about 194 poured-out 2L bottles of Coca-Cola Classic.

The 2012 Hyundai Accent manifests sufficient space, tremendous fuel economy, extraordinary value, and a comprehensive 5-year, 100,000 kilometre warranty in Canada. Besides all that practical stuff, the 2012 Hyundai Accent looks pretty good for a subcompact sedan and is a wonder on the highway with its smooth ride, astute transmission, and surprisingly prodigious passing power.

Is it a Sonata or Elantra on the cheap? Hyundai’s excellent Elantra is a little bit better-looking, nearly as efficient, somewhat more spacious, and quite a bit more mature in its driving experience. But for a buyer in this price bracket, a similarly equipped Elantra will cost about 15% more. If its engine hadn’t convinced you already, that fact could have you recommending the 2012 Accent to your friends. And perhaps even to yourself.

Thanks to Steele Hyundai in Halifax, Nova Scotia, and
Bob Brown for arranging this 2012 Hyundai Accent test drive.