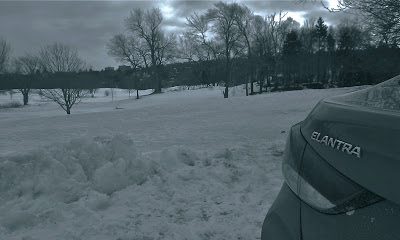 Minutes from downtown Halifax, Nova Scotia, the 87-year-old Ashburn Golf Club is a fortress of solitude surrounded by thoroughfares on two sides, high-density housing on one, and the city itself on the east. Tree-lined fairways and a beautiful clubhouse make Ashburn a premiere golf destination, especially since no other golf course is so close to the urban core.

And right now, Ashburn is covered in snow. The road leading to the clubhouse is slathered in a grayish white from months of salting. Walkways are icy. Ensconced in the heated seats of a 2011 Hyundai Elantra GL, a glance at the outdoor temperature gauge says it’s -4°C, or 25°F. Listening to the news on CBC Radio, I hear about crude prices rising on account of trouble in Libya. As I turn to exit Ashburn Golf Club to return the Elantra to @bobbrown46, turning left is impossible. Traffic is vicious, and rush hour hasn’t yet begun. All those cars, just like the Elantra I’m in, are grimed up with the grimiest of filthy salty grime known to mankind.

This is the real world. This isn’t the world where I have $230,000 to spend on a Ferrari 458 Italia, nor is this the world where a jet ferries le famille to the Caymans at our leisure. We have no local NHL team, I will not be a professional tennis player, I will not golf in February. C’est la vie.

Don’t be discouraged by this clarion call for realism. Though it won’t solve your weather issues or supply you with athleticism or temporarily vaporize your children so they’ll fit in a Ferrari’s cup holders, the 2011 Hyundai Elantra is the automotive equivalent of a sunshiny 5° mid-week winter vacation day during what would’ve been 40 hours of doom and gloom. Keep reading, you’ll see it soon enough.

Particularly in Canada, the Elantra’s competitive set makes up a huge portion of the overall market. This is true to an extent in the United States as well, where the Toyota Corolla/Matrix duo became America’s best-selling car in January. So while magazine covers feature two-seat roadsters, AMG-like monsters, and exaggerated concept cars, we buy cars like the Honda Civic, Mazda 3, Ford Focus, and this 2011 Hyundai Elantra. 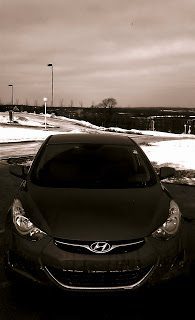 For the purposes of this review we’ll be dealing with Canadian pricing and trims. There are significant differences in the way Hyundai USA lays out their model lines, but American readers can rely on the spec sheet for assistance. To get some specifics out of the way, be clear on the car GoodCarBadCar.net had access to: a 2011 Hyundai Elantra GL at $19,199, a price which includes the $1200 6-speed automatic transmission, which we’ll discuss in a moment. Beyond a full slate of safety equipment, the Elantra GL goes further than the Elantra L by adding air-con, heated front seats, Bluetooth, 16-inch wheels, and some other convenience items.

There’s no doubt that, above all else, the Elantra stands out as a mature automobile. The aforementioned features contribute to the formation of that impression. But it’s more than that, so much more than that. Small enough to be easy to park and big enough to be huge inside, the Elantra’s dimensions are wonderfully confused on the road, too. There’s a measure of agility with this car, but cruising down the highway, you’ll enjoy the comfort and relaxation of a big ol’ American sedan. It should go without saying – real world cars need to be able to do it all.

Don’t mistake “doing it all” for “sporty dynamics”. Hyundai has designed the Elantra sedan to be relatively agile (the Chevrolet Cruze carries more than 400 extra pounds); the steering allows more connection with the road than most modern commuter cars; and the 148-horsepower 1.8L four-cylinder is genuinely zippy. But sporty? Potential for an outstanding 200-horsepower Elantra coupe is plentiful. The same can’t be said of numerous rivals. That said, the Elantra will handle a vigorously attacked twisty road so long as you don’t mix up the Elantra’s swoopy styling with the Genesis Coupe’s suspension.

Indeed, the 2011 Elantra places a tremendously high priority on satisfying its owner 95% of the time, and it succeeds. Finding the perfect driving position is easy with a tilting/telescoping wheel and a height adjustable seat. Controls are easy to navigate; there are extra buttons on the wheel. Rear seat passengers are treated to acres of space, so much so they won’t be complaining… ever. Fit and finish is admirable. Quality of materials will simply meet expectations – the Elantra exceeds’em in almost every other way. One serious study of the windowline, trunklid height, and A-pillar width will see your expectations for visibility lowered, at which point you won’t be disappointed when you only spot that Aveo out the passenger side corner at the last second. Unfortunately, poor visibility is par for the course these days.

Speaking of landing one three feet from the hole with a hint of backspin, the winning iron in the 2011 Hyundai Elantra’s club collection is style. Even as the face-lifted 2011 Toyota Corolla appears as dull as ever and the “all-new” 2012 Honda Civic is a less attractive version of its current self, the Elantra is one seriously fetching four-door. From the arch of the roof to the character lines flowing freely from headlamps and taillamps to its squat stance and strong wheelarches, the 2011 Elantra can reign in buyers who aren’t aware of its safety cred, fuel economy supremacy, and excellent warranty.

If the Elantra’s style is its eye-catching Callaway FT-iZ, the 6-speed automatic transmission is the putter. Not as high-profile but way more necessary for birdies… I mean, efficacious travelling, the Shiftronic tranny switches gears smoothly but in a hurry, aiding acceleration and economy. Pop the gear lever over to the right and shifts speed up when you take over the duties. It’s not Lamborghini’s Independent Shifting Rod magic, but it’ll blow a Mercury Topaz driver’s mind.

Pleasant to drive, powerful, efficient, handsome, comfortable, safe, well-equipped, value-priced…. er, save for the visibility and plastic complaints which were actually directed at the Elantra’s whole segment, doesn’t this sound like a Hyundai commercial?

For starters, no, this isn’t a Hyundai advertisement. Other automakers have built excellent small cars, (normally at a higher price point.) The Elantra wasn’t included in GoodCarBadCar.net’s The Good 12. The 2012 Hyundai Accent will also feature extra content, safety features, and an efficient yet effective engine, thus taking some of the shine off the more expensive Elantra.

Nevertheless, we live in the real world, a world where the only golf we can play now is glow-in-the-dark mini putt; a world in which Ferraris remain unseen; a world where tens of thousands of North Americans will buy compact sedans every month. In that world, the one you live in, the 2011 Hyundai Elantra makes most of its competitors look silly.

Hyundai Elantra Reviews From Other Sources
Edmunds Inside Line