WHY DID THE PASSAT WIN MOTOR TREND’S COMPARISON?

It’s a question many readers will be asking: why is it, that in a test geared towards fuel efficiency and value, that the thirstiest car drinking the most expensive fuel at the highest base price and highest as-tested cost could take the crown?

You know that The Good Car Guy exalts the good cars, making clear that some cars have added worth. Some cars more successfully make good on their promises and deliver above and beyond their pricing scheme. Nonetheless, plenty of critiques will be thrust Motor Trend’s way and plenty of them will stem from humans who’ve not even read the article. Here are some essential paragraphs.
—–
From Motor Trend / August 2008 / Kim Reynolds-
“The participants of our 10-sedan caravan were universally powered by their more efficient, smaller four-banger engines, instead of their lustier but gas-grogging V6s. Not only does this base-engine belt-tightening drop our fleet’s typical price by about two grand, or nice percent (almost 11 grand in the case of the Passat’s pricey VR6), but it ratchets up their all-important mileage by an average of 11 percent.” 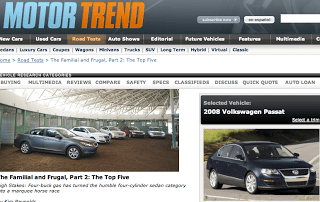 “So how about we get right to the big “M” – Mileage. At the moment, sales of the four-cylinder cars are absolutely on fire what with four-buck gas. That ought to make the Hyundai Sonata, in particular, a hot commodity as it apparently uses cocktail straws instead of fuel lines to feed its cylinders: 25.6 combined EPA is frugal – and unexpected – as Hyundais have historically been laggards in the mpg department (a tip of the hat to Hyundai’s new Theta II engine then). This bests the Camry and Accord, which are tied at 24.6, the Fusion at 23.2, and last (among our top five) the Passat’s 22.2….. That Passat’s number seems relatively crummy – 3.4mpg worse than the Sonata’s. The shiny side of this penny is a 0-to-60mph acceleration rate that’s potentially 23% lustier (depends on your right foot) than the Sonata’s – 6.7 seconds versus 8.7.”
“Advince to Volkswagen: Kick the premium gas habit, accept a less egregious price penalty, and keep living-down that reliability reputation….. Sad to say, its base price isn’t shy about reflecting either, with its $25,755 being almost four grand skyward of our Camry LE’s ticket price.”
“Our putting the Passat in first place wasn’t achieved without a couple rounds of rancorous “debate”. Some felt the Volkswagen was so attractive and so far and away the best driver’s car it would be nuts to consider anything else. Case closed – any questions? A minority view held that in this cateogory, price, fuel economy (not needing premium gas), and a strong reliability rep (you can Google J.D. Power’s views on the Passat yourself) made the Sonata the glaringly obvious practical choice. These are two valid and not easily reconciled perspectives. Passion versus practicality.”
—–
What do you say to that? Acknowledging the case for the cheaper and more efficient car seems trite, but considering the positioning of the magazine, embracing the enthusiast’s sedan makes sense.
Except…. if a driver’s car is what you wanted, why bother with ten decent but dull vehicles? The positioning of cars like the Camry and Accord – even when tarted up – is of the high value sort. These are cars for families in pursuit of comfort and convenience; on some sort of a budget. Thus, selecting the $29,333 car that demands premium fuel and guzzled at the rate of 22.8mpg during the test when the second-best choice was a $22,235 car that did not demand premium fuel and used less gasoline seems glaringly odd and misaligned with the purpose of the test.
Was the Passat 2.0L Turbo better than the rest of the pack? Quite likely. It better be. Was the Passat $7,000 better than the Sonata? That’s highly unlikely. Email the MT editor at [email protected]
Check GoodCarBadCar.net’s 0-60mph label to see how the cars performed and don’t forget to follow this link to AutoEnergy to read about their fuel economy.