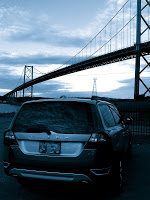 In fact, GoodCarBadCar.net made this very clear when the core Volvo wagon, the V70, was named to The Good 12 at the end of 2007. Specificity was required, and the XC70 didn’t make the cut. Increased toughness doesn’t garner you a spot in the 12 cars recommended for The Good Car nation for 2008.
Seven or eight months later, Volvo Canada offers to park an XC70 T6 underneath GoodCarBadCar Towers. Coincidence? It appears as though more recognition is sought. Perfectly logical arguments start with the fact that the XC70 T6 is a V70 plus more: more height, more driven wheels, more power, more visual impact.
And more money; and more fuel consumption. That’s where The Good Car Guy’s argument has always rested, even when Volvo permitted five days in a previous-generation XC70 a few years ago. $1,600 fewer dollars allows you entry into the V70 club in Canada. South of the border, Americans can access a V70 for $4,310 less. This argument will continue in a moment.
After all, the XC70 has a case to make. It was mentioned earlier in this XC70 experience that Volvo sells three Vs. Versatility is obvious. Just a couple nights ago, the XC70 was turned into an RV when we threw our luggage in the front seat, folded the rear seats flat, sent the mother-in-law and brother-in-law into tents of their own and slept underneath the stars roof. Two sleeping bags, two pillows, and one comforter completed the package. Indeed, there was no difficulty finding sufficient capacity for all our assorted junk in the front seats, either. Were it not for the bugs in Kejimkujik National Park, the sunroof and windows would have been opened to enjoy nature’s opera.

Versatility? The XC70 is whatever you want it to be.
Volvo sells safety more actively than any other automaker on the planet. Thoughtfully, the most obvious safety feature to my naked eye stood in stark contrast to a much smaller and less expensive automobile that appeared in a Driven article here on GCBC a couple weeks back. Although the Chevrolet Cobalt weighs less than 3,000 pounds (comparing favourably with the XC70’s 4000+ lb. girth) and has a fraction of the cargo capacity, it was the XC70 that allowed me to see around corners as well as to the sides and rear of the car. Pillar width has rapidly become a serious problem in modern automobiles. Stringent crash standards are forcing automakers to strengthen their roofs in the event of a rollover, leading to worsening visibility inside the car.
Somehow, Volvo manages to combine both crash safety with driving safety. At least let me see what I’m about to crash into before you save my life.
Joie de vivre is hard to define, but the XC70 makes life comfortable, relaxing, and easier. Space is plentiful for all occupants. Interior simplicity has been improved over previous generations. Passing power is easy to tap into and even the suspension can be adjusted ever-so-slightly to account for rough roads (turn off the Advanced) or enjoy serene ride quality (Comfort it is). Surround sound stereo quality would be mighty challenging to match in your own home. The front seats are suitable for a comfortable and contemporary luxury living room.
That’s not to say the XC70 is faultless. Fuel consumption, as evidenced at AutoEnergy three times with the likes of Lexus and BMW, is much worse than its wagon origins would lead you to believe. 21 miles per gallon might be acceptable, but city driving resulted in 13.8mpg…. which is terrible.
Granted, this is a 281-horsepower car. Even there, the Volvo disappoints slightly. Part of a modern vehicle’s safety setup is excessive obesity. Turbocharged, all-wheel drive six-cylinder wagons from Sweden aren’t light on their feet. Thus, 281 horsepower doesn’t feel like it until the time comes to knock the shiftable six-speed auto down a notch and rocket past slow-moving rural traffic.
It must also be recognized that the XC70 brings joy to your life but isn’t fun to drive. This car is too heavy, too high, and too comfort-oriented to be fun to chuck around corners. Fun to own? For sure.
To nitpick, it must be mentioned that the whole centre console sits a little low for a tall driver. Every button is simple to decipher but a touch too far away. Something is wrong with the steering wheel; it’s either too thick or too small in diameter. It could’ve been the result of an abused press car, but upon taking off from rest, disturbing vibrations traveled through the front of the car to the gas pedal. And only because of the price, upwards of $54,000 CDN, would we seek out a larger sunroof. I have no bald spot and therefore nothing to burn. Let me have light.
Taking it all in is much easier to do in a week than the very brief test drives to which auto writers are typically exposed. Each passing day revealed more reasons to appreciate Volvo’s development and understand its expense. In the cargo compartment, the secure area underneath the floor is revealed by a strut-held trap door. Qualitaaay. Tie-down hooks are everywhere. Rear seats fold with a click. Doors thunk.
What more can we ask for? Perhaps…. a little less. Less cladding, less power, less fuel consumption, less height, and less expense. That’d be a V70 then. 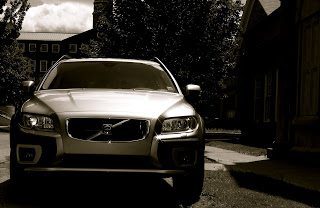