American drivers have a fever, and the only prescription is more crossover utility vehicles. Or, at least, that’s what they think.

As I sit here longing for the 2019 Volvo V60 T6 Inscription that I only spent one short week with, it occurs to me that a few million people across the U.S. and Canada will make a terrible mistake.

They’ll either march out to the dealership with their smartphones and post a picture of themselves and their new RX, NX, Q5, GLC, RDX, X1, X3, X5, XT5, QX50, MKC, F-Pace, Nautilus, or Land Rover something or other to Instagram, or they’ll tweet about how easy it was to buy one of those vehicles online.

They think they need the extra ride height for all the adventuristic things they’re going to do. They’re wrong. Most of those crossovers will never do anything more extreme than roll down a long gravel driveway in the rain or shoot along a snow-covered highway.

A wagon would suit them better, and not just any wagon, the Volvo V60—specifically the T6 Inscription version. 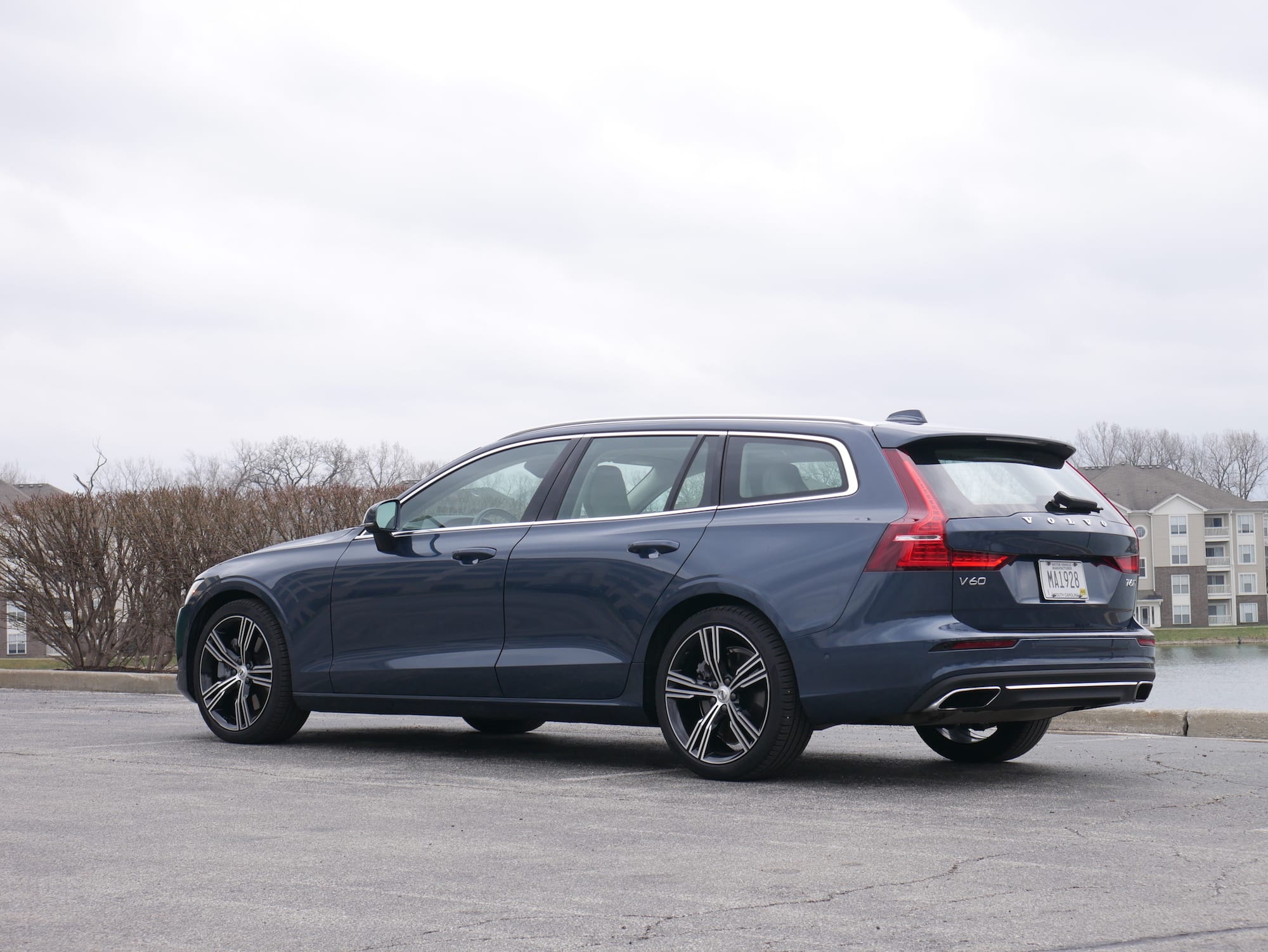 The Volvo V60 is a station wagon, but not like the boats from the 1970s that drove the vehicle type to near extinction. No, this wagon is lithe, beautiful, and good at just about everything.

It’s like the attractive mother of three who runs mini-marathons on the weekends, works full-time, volunteers with the PTA at her kids’ school, is friends with all her neighbors, enjoys a night out on the town, and somehow still always finds a way to get her husband and offspring gathered around the table for dinner.

It seats five people comfortably, has a very large and practical cargo area, and a surprisingly powerful turbocharged and supercharged four-cylinder engine. My test vehicle came with all-wheel drive, which is something that most people think they need when they really don’t. Still, it’s nice to have.

The Volvo V60 is the classy utility vehicle. It’ll haul your bags and gear with ease and make you smile on a twisty road. It’s low slung, quick, and composed enough to feel sporty, and spacious and comfortable enough to feel practical. It puts crossovers to shame and is more elegant and attractive than most of the other wagons on the road. In short, the V60 is a very good car that will be overlooked, and that is a true shame.

A Long and Beautiful Exterior 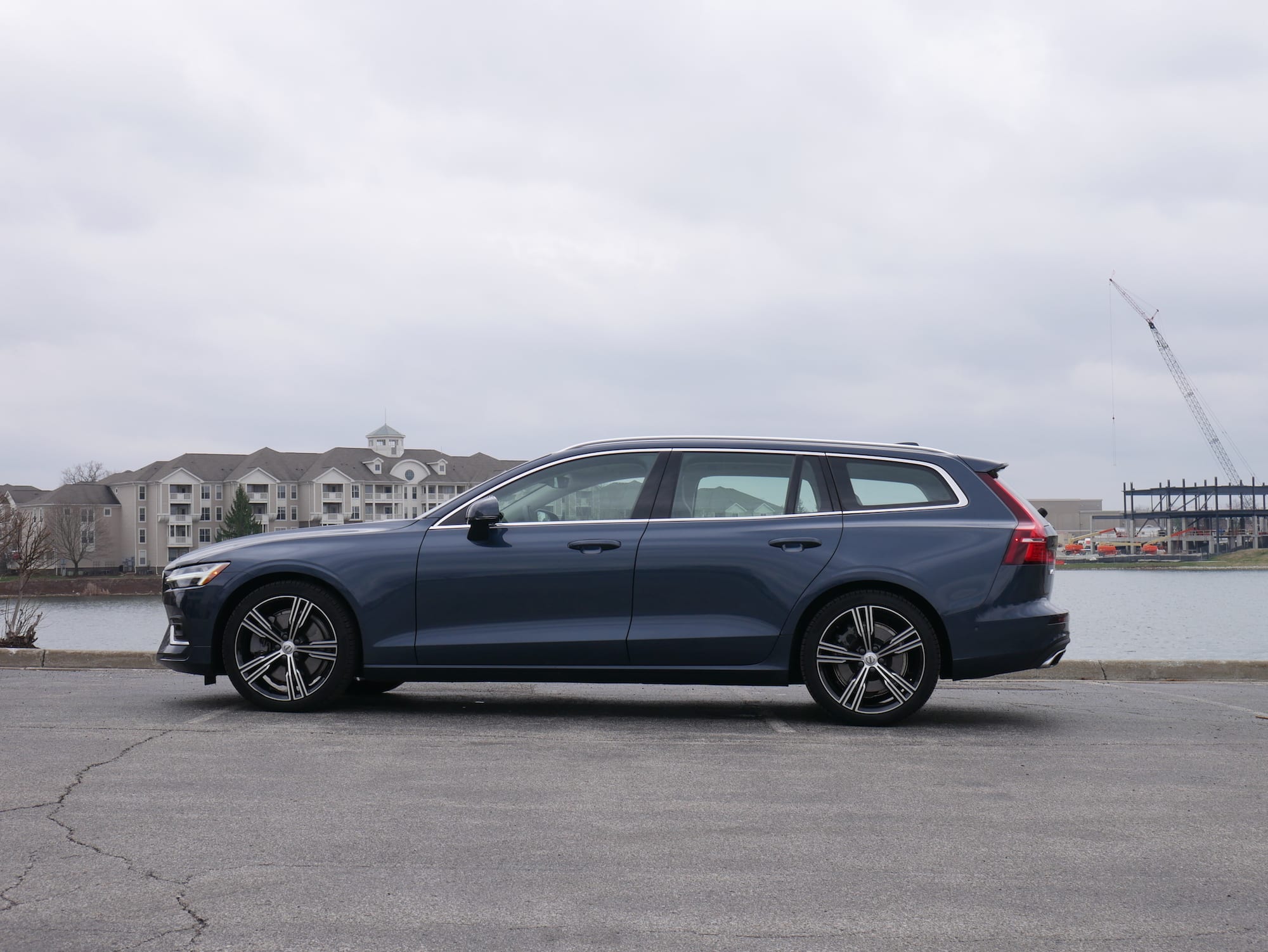 The V60 isn’t as long as its big brother, the V90, but it arguably wears the long-roof design better. The V90 is almost too long. It flirts with the boat-like wagons of old whereas the V60 is just long enough.

It provides ample length for Volvo to make it look sleek and stylish. The Thor’s Hammer headlights, large wheels, smooth lines all help let people know this is a special car, and it looks different than most other vehicles on the road.

It’s not wildly aggressive, but it doesn’t need to be. This isn’t some sport wagon or muscled out estate car. It’s a well-rounded machine, and its exterior design and styling reflect this.

An Elegant and Minimalistic Interior 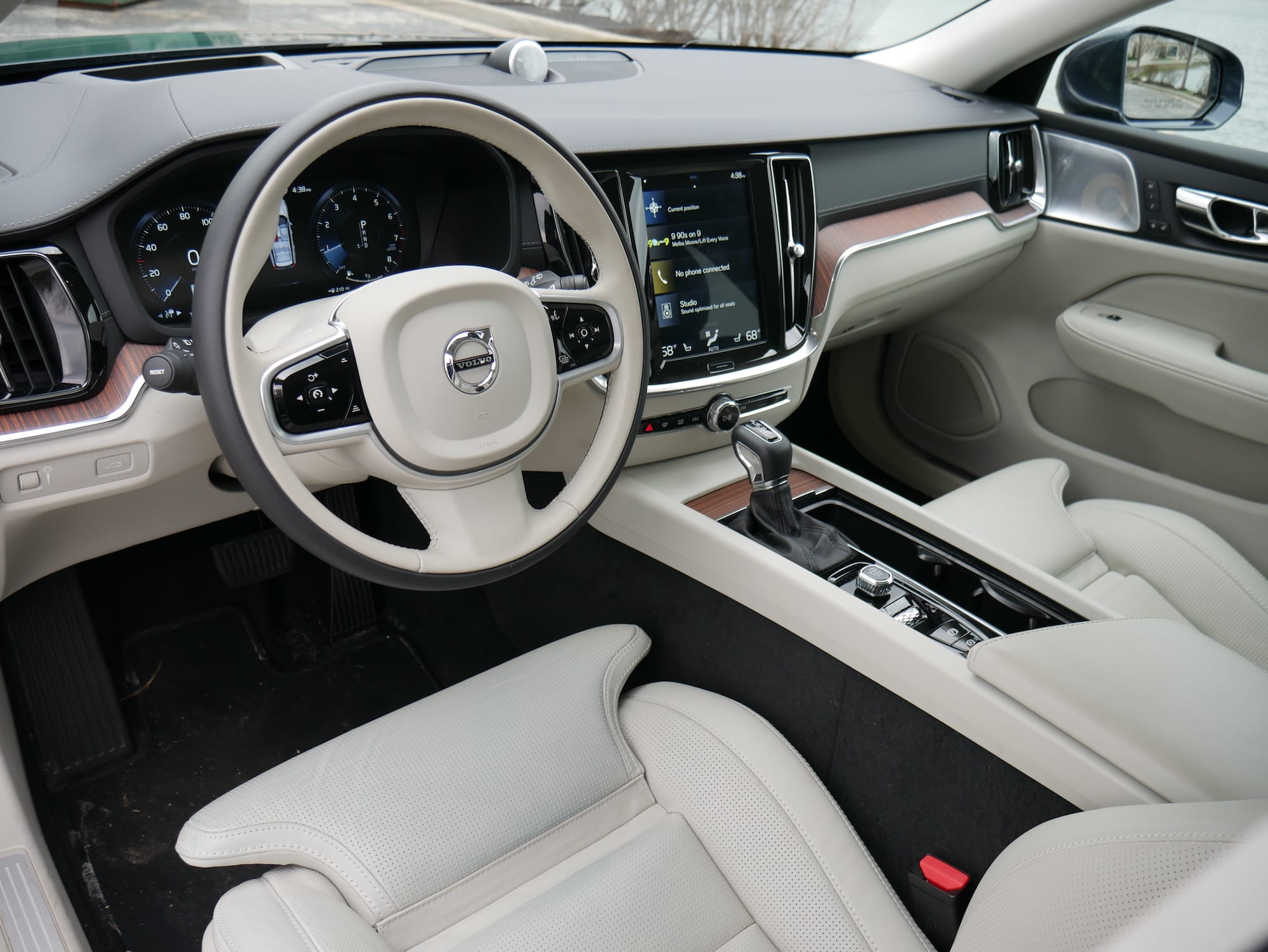 All of Volvo’s new interiors in their latest vehicles look very similar. The company has a sleek, luxurious, and minimalistic design for its cabins. It’s a distinctively Scandinavian design, and it’s something that looks as though it will age well.

A big part of the design is freeing up the dash of clutter by adding in a single large 9-inch touchscreen display. Pair that with the high-class materials and real wood trim and you have something that will look good for years to come.

When the interiors from other automakers featuring lots of layers and different materials look old and dated, this one will continue to look fresh. 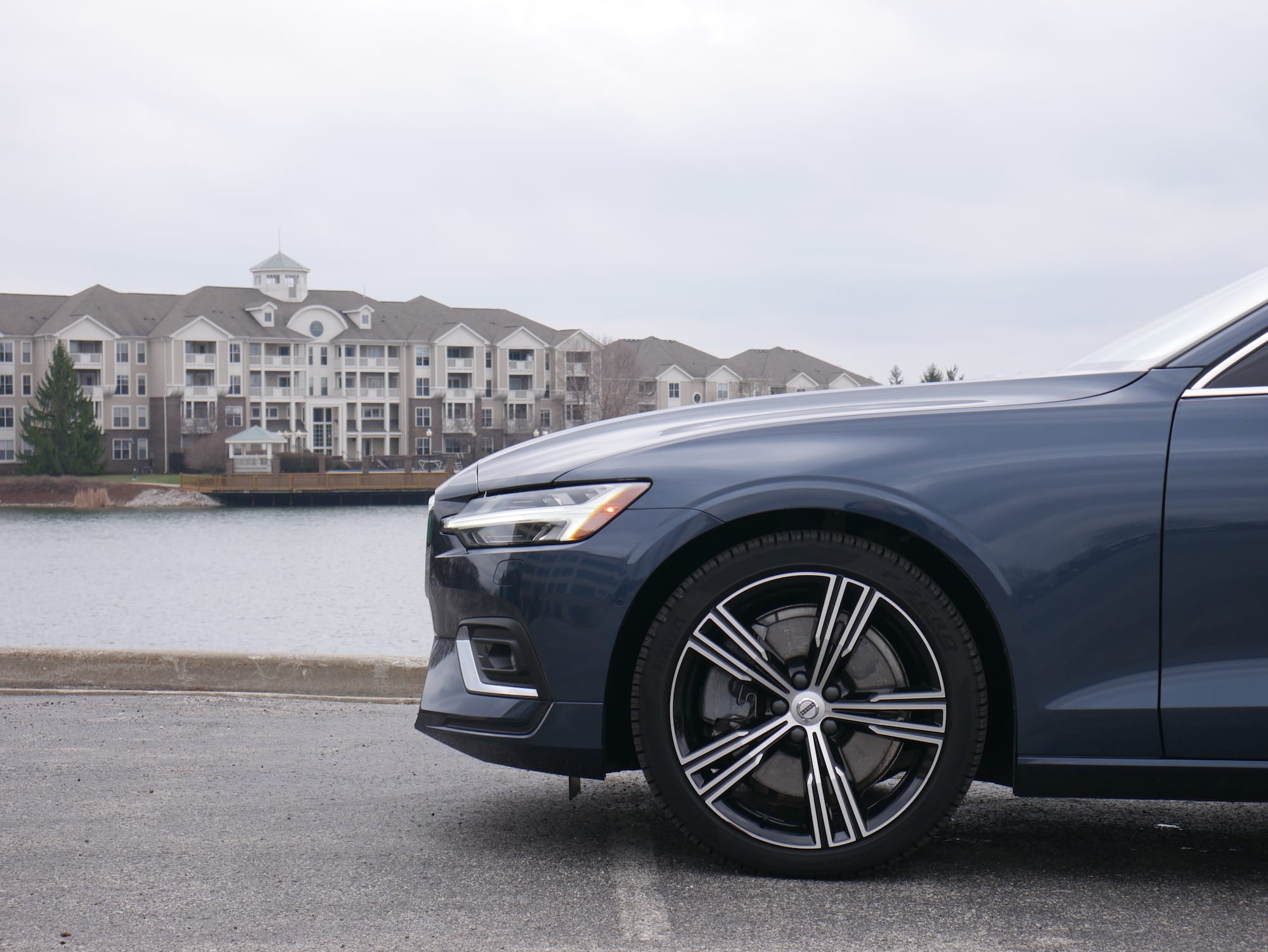 If you thought the V60 was all flash and panache, you were wrong. The T6 version comes with 316 hp and 295 lb-ft of torque. That’s the turbocharged and supercharged engine we mentioned above.

In an age when some production performance cars are making upwards of 800 hp, that might not sound like much, but it’s actually more power than many mainstream sporty coupes make, including the base Mustang, Camaro, Challenger, BRZ, and 86.

Still, the car feels fast, faster than many other cars that claim to be sporty or sports-car inspired or whatever other ways manufacturers try to make their vehicles sound fast and good to drive.

It comes with an 8-speed Geartronic automatic transmission attached to its eager engine. That transmission manages the power well and filters it all four-wheels with ease.

I should mention that the base model of the V60 comes with a 250 hp turbocharged four-cylinder that sends power to the front wheels. I have not driven that version of the car, but I would like to. 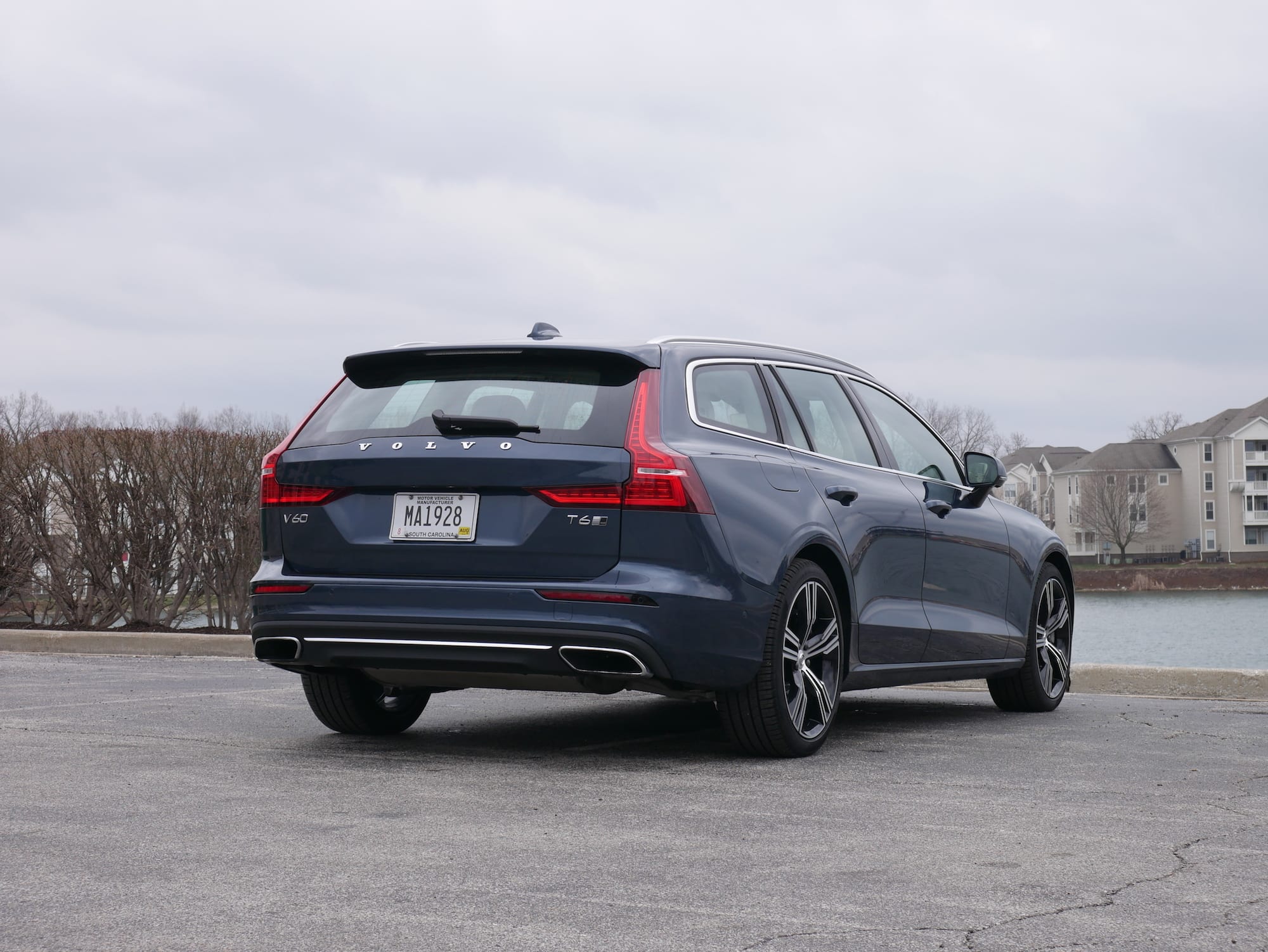 It’s the right size. That is to say, for people with a spouse and a couple of kids it offers plenty of cabin room and a large cargo area that will swallow everything from the biggest of grocery runs to the bags for a vacation getaway.

The car measures 187.4 inches long, 72.8 inches wide, and 56.4 inches tall from the shark fin antenna. The interior dimensions 42.3 inches of legroom in the front and 35.2 in the rear. It has about 23 cubic feet of storage space with all seats up and over 50 cubic feet when they’re folded.

For comparison, the Mercedes-Benz E-Class and the Jaguar XF Sportbrake are both quite a bit larger than the V60 when it comes to the exterior. Despite this, the interior dimensions are about the same, except for the cargo areas which are quite a bit larger.

The Audi A4 Allroad isn’t quite as large as the Mercedes and Jaguar on the outside, but it is larger than the Volvo V60. Again, it doesn’t offer much more in terms of interior space, though the cargo space is larger.

The BMW 3-Series Sports Wagon is about the same size on the outside as the V60. Their dimensions are practically identical. When you look inside, you’ll see that the interior specs are about the same too. One area where the BMW does beat the Volvo is cargo room. It makes room for about four more cubic feet.

So, you’ll give up a little bit when it comes to cargo space. I never found the V60 lacking in this department. It swallowed camera gear, duffle bags, grocery bags, and more with ease. Yes. At innumerable points in my week spent with the vehicle, I was grinning like a madman. And not just at the car’s prowess on the road.

I smiled at the seat massagers and the smooth leather, the way the cargo area swallowed gear like a hungry hippo, and the active bending headlights. When I first realized they were installed on my tester I told my wife, “Look! Look at them!” as I turned the wheel. She nodded unperturbed.

The engine has the perfect amount of growl and turbo whine, and it makes just enough noise to be heard but not enough to ruin the serenity of the quiet cabin. And the stereo, my God, the stereo. 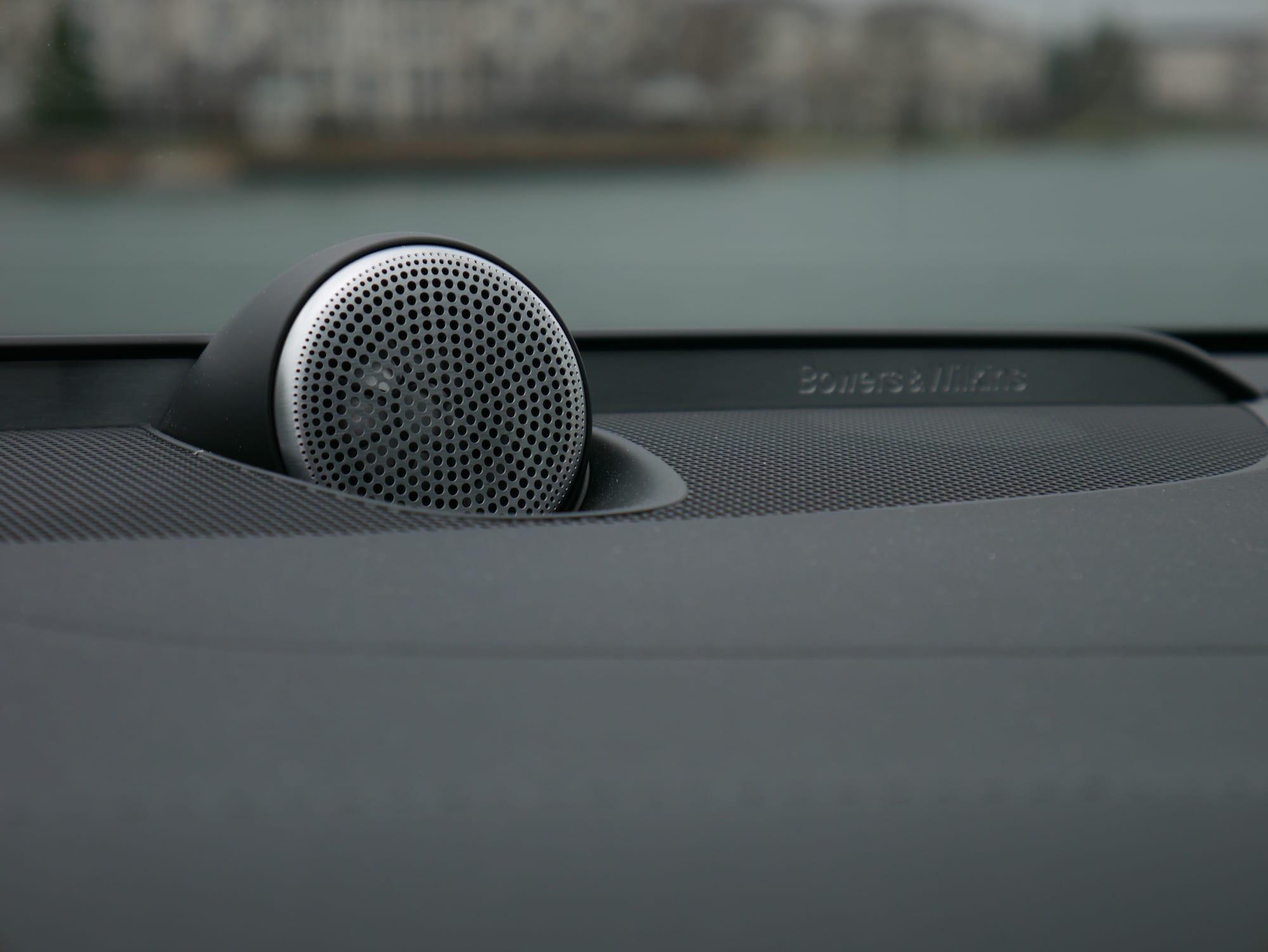 My tester came with the 600W Harman Kardon Premium Sound system with 14 speakers. It was superb. Volvo also gives you far more adjustments than any average person will use. You can adjust the sound quality in many different ways and the notes are crisp and clear at any volume. I played with it for a few minutes one day and then did what everyone will do and set it where it sounded good for everything and left it.

I have two gripes with the car. The first was that the Four-C Active Chassis and the 19-inch Inscription wheels made the ride too stiff.

In the Comfort drive mode, it was just a bit too harsh around the raggedy, pot-holed roads of Indianapolis, and downright uncomfortable in the Dynamic mode.

The other gripe has to do with that super-sleek touchscreen display and the Sensus infotainment system. It looks good, yes, but it’s a little finicky at times.

Also, the icons are a bit too small to hit on the go. It doesn’t help you have to use the system for literally everything. I got used to it after a while, but at first, I am ashamed to say I felt like a Baby Boomer at a tech convention. 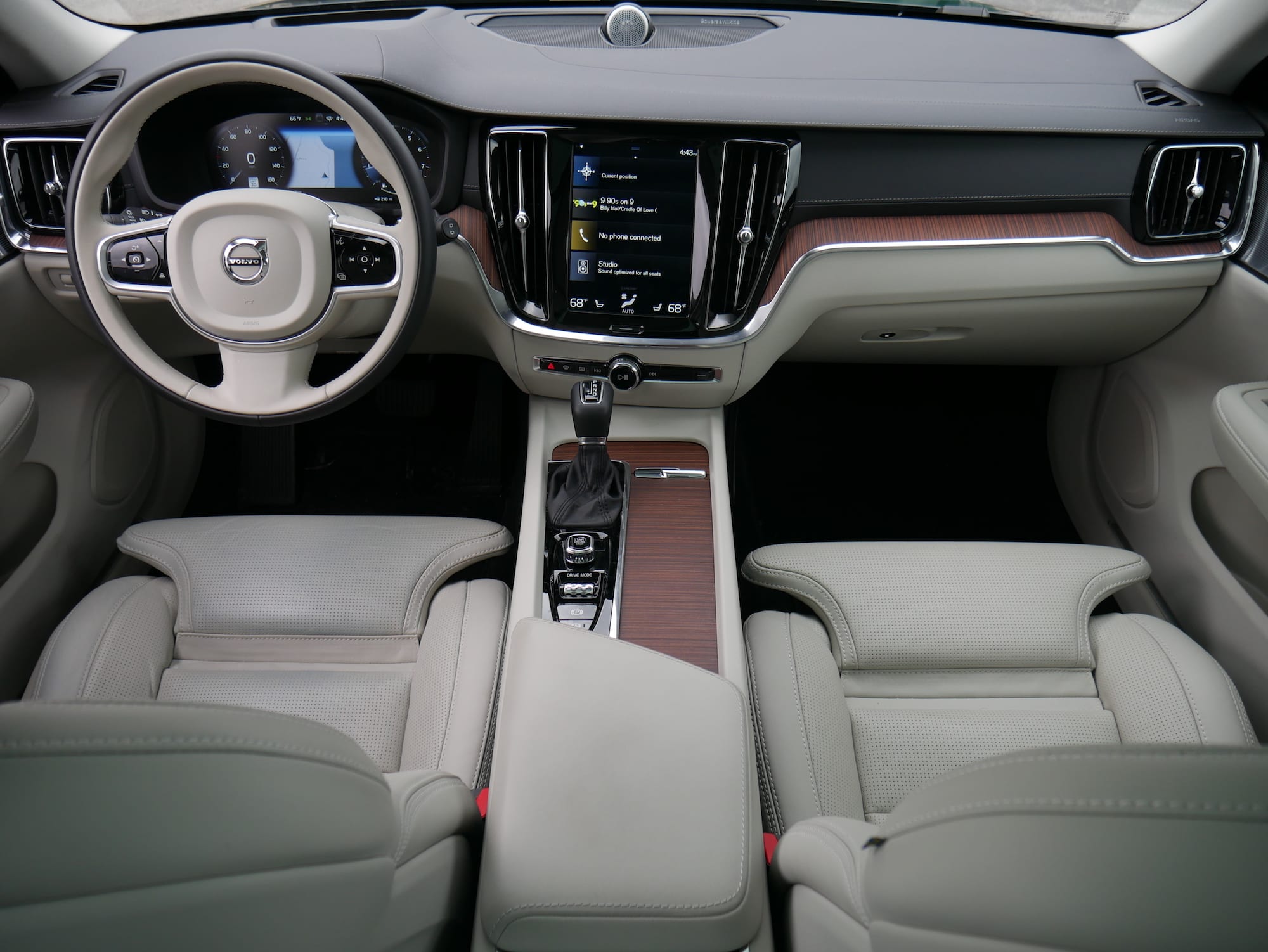 Another point to mention was the leather in the Volvo feels fantastic. It’s soft and smooth and genuinely makes the cabin a much nicer place to be.

With that said, I noticed the seat bottom had begun to take on a bit of a blue hue from the many different pairs of jeans that slid into those ultra-comfortable seats. If you don’t want to watch your seats slowly turn into a different color, get black leather. 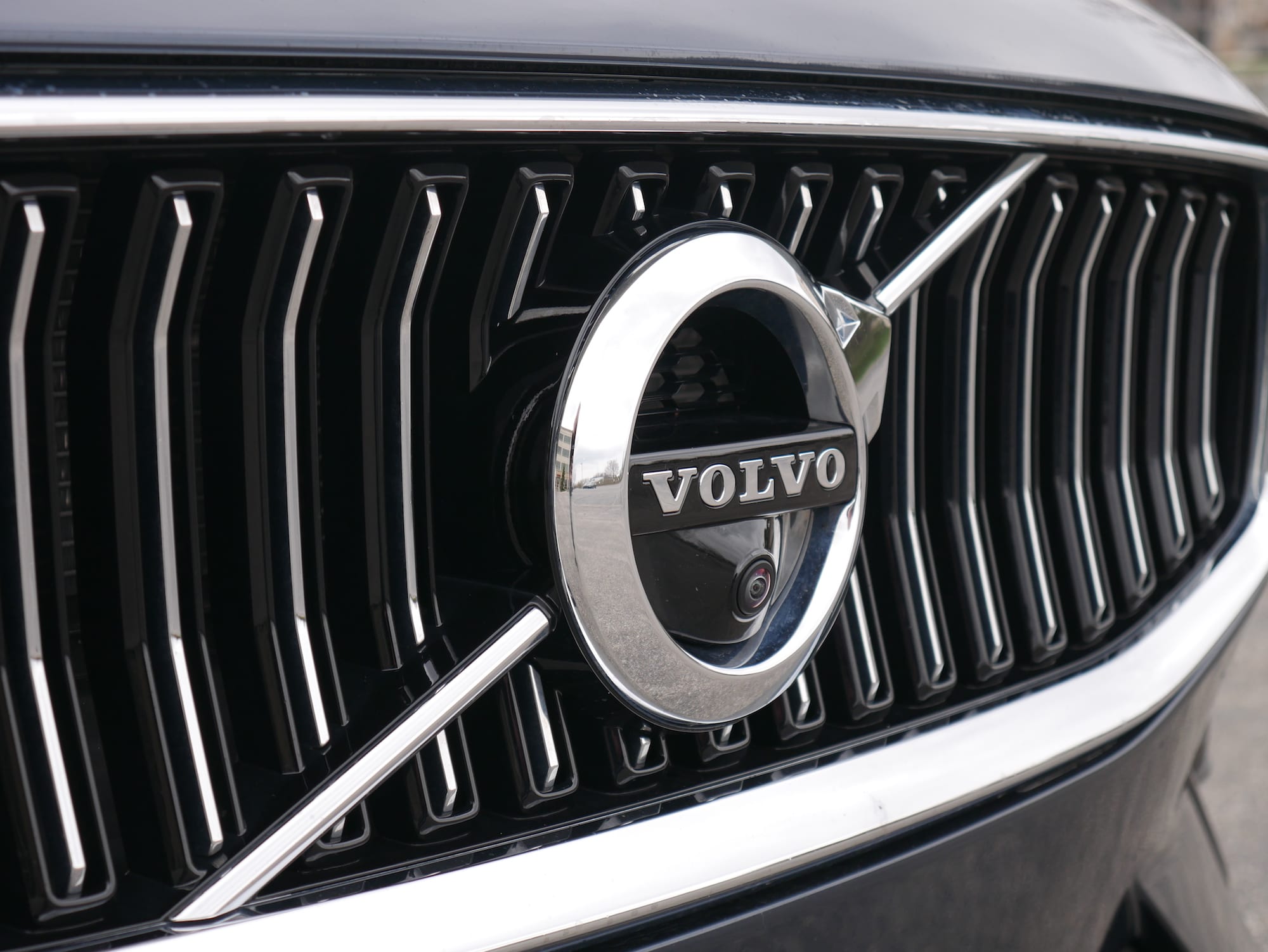 The Volvo V60 can get expensive. My tester came in at $61,490 after destination. It’s worth it. When you compare the Volvo V60 to the competition, it makes even more sense.

For a quick recap, the key competitors are the Mercedes-Benz E-Class Wagon, BMW 3-Series Sports Wagon, Audi A4 allroad, and Jaguar XF Sportbrake.

The Volvo beats all these cars on price in its base form by a landslide. The V60 has a starting price of $38,900, which is lower than all of the competitors listed above. It’s lower by at least $6,000.

Sure, you can climb the ladder to the T6 Inscription version, but comparable models from other luxury automakers are still more expensive.

I can feel the boys at GM giving me the stink eye because I haven’t mentioned the Buick Regal TourX. I like GM’s Regal TourX. It offers some fantastic features and a very generous storage area for a fair price. It starts at $29,070.

However, it’s nowhere near on the same level as the Volvo in terms of driving prowess, comfort, sleek design, and luxurious interior materials. The Regal TourX is priced appropriately for what you get. On the flip side the more you compare the true high-class competitors to the V60, the clearer it becomes that the Volvo is a bargain.

When you compared the Volvo to crossovers, it’s also either competitive with those vehicles or cheaper. Once again, the wagon makes more sense. 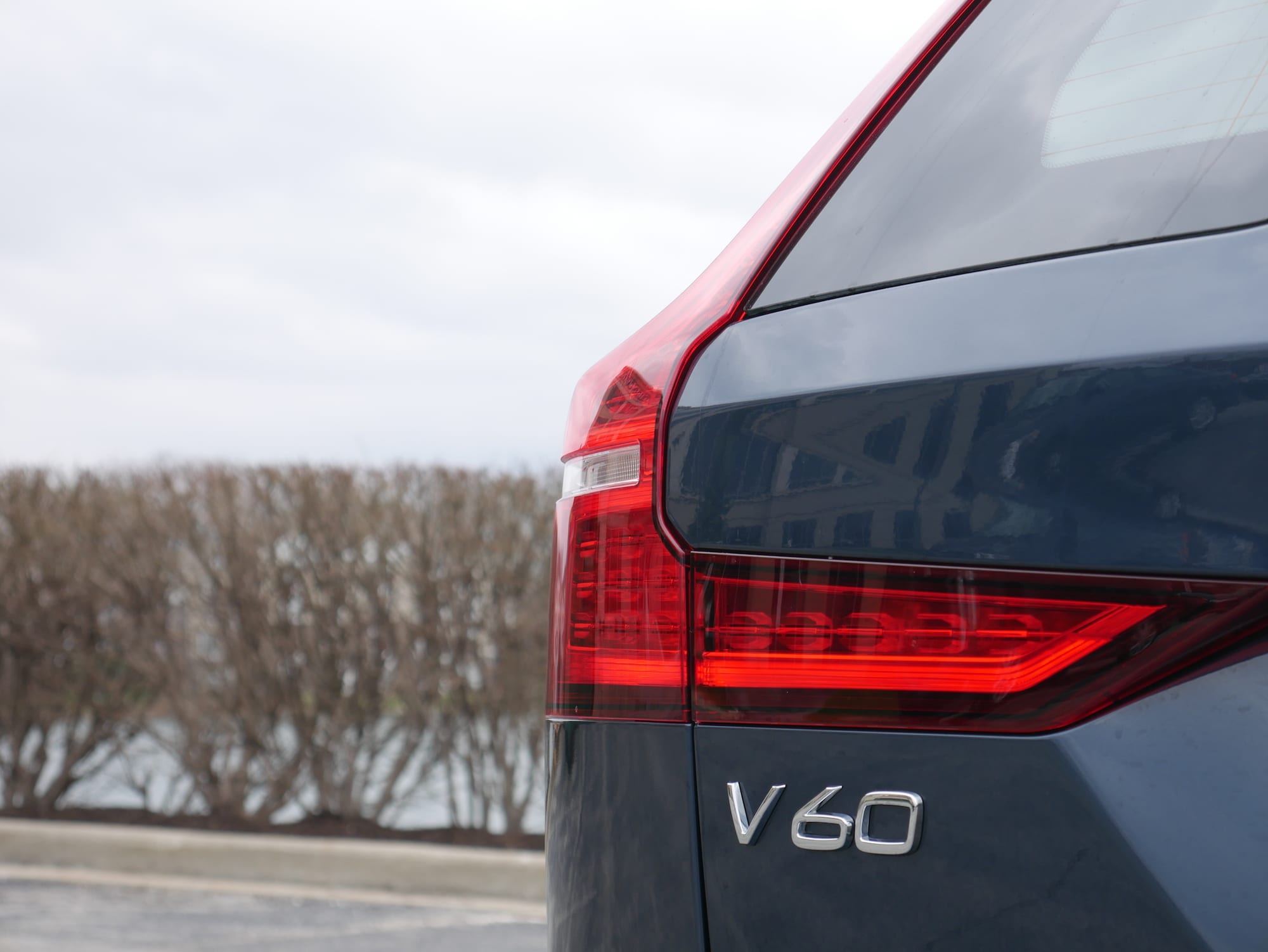 If you’ve read this far into the review you can probably tell I think the 2019 Volvo V60 is one of the best cars on sale today. Is it the best? For the right person, yes. However, what’s best depends on your situation and preferences. If that weren’t the case, we’d all drive Toyota Camrys or Honda Accords.

Everything the Volvo V60 can do, it does extremely well. It excels at and stands out as a well-rounded machine in an automotive industry that’s full of vehicles claiming to be such and coming up short. The reason the V60 is so impressive is that it delivers.

If you’re thinking of a crossover for your next vehicle and you truly don’t need the ride height of a crossover, I beg you to test drive a wagon. Test drive any wagon, but especially the 2019 Volvo V60, specifically the T6 Inscription model. It does pretty much everything a crossover does but better and is so much more satisfying.