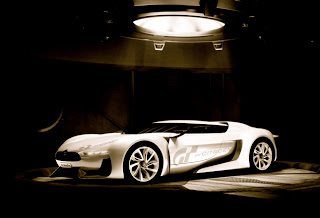 The good and the bad have already been declared. We’re only discussing previously un-seen-at-GCBC cars from the Paris auto show currently underway. Audi and Renault snuck cars into the good, Lexus and Peugeot forced cars into the bad. Nissan and Renault are found in the weird department.

Now for another French automaker. Citroen’s GT Concept is a stunner. Visually dramatic. Long; low; and lean like a Bugatti Veyron. Unlike anything else available.
But placed beside an Aston Martin DBS, Lamborghini Murcielago, Ferrari 599 GTB Fiorano, Porsche Carrera GT, or even a Bentley Continental GT, the Citroen is, dare I say it, ugly.
That’s not to say the Citroen deserves to be considered bad. To put it simply, good is the opposite of bad; good can’t be ugly; but ugly is not the twin of bad. I even sort of like the Citroen GT Concept. It is, after all, unlike anything else. But pretty, handsome, beautiful, cute, or lovely? No. It’s ugly.
In a similar vein, the Mazda Kiyora Concept has unique elements and impressive angles. All-around, however, the Mazda Kiyora is a letdown, especially compared with some earlier like-minded Mazdas like the Riyuga or Taiki.The Kiyora designers stuck with a theme. Everything sweeps. Rather, almost everything. The Kiyora looks pudgy and the aftertaste is somewhat Mazda-of-the-90s. That’s not good, it’s not bad. It’s just ugly.