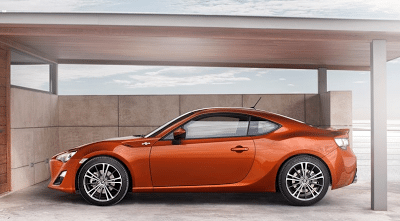 It will generate 197 horsepower at 7000 rpm and 151 lb-ft of torque at 6600 rpm with a 2.0L boxer four-cylinder. It will weigh less than 2700 pounds. It will be 167 inches long, 50.6 inches tall, and 101 inches wide. It will also be sold as the different-in-many-ways Subaru BRZ. It is the Toyota GT 86, a car formerly known as the Toyota FT-86. We will most likely know this sporting rear-wheel drive Toyota as the Scion FR-S. Probably. If that’s what it ends up being named when the Toyota GT 86 reaches North America shores. The Toyota GT 86 will go on sale in the United Kingdom in June 2012. And it looks like this.

The front three-quarter is surely the GT 86’s best position for photography. When viewed from the back the GT 86 isn’t the classiest but it will make the rear angle unmistakeable. There’s too much air above the rubber. The rear wheels seem to be just a little hidden in the rear wheelwells. Toyota’s application of a rear wing on a car that has plenty of visual interest without it is disappointing. In this trim the profile of the tires appears absurdly high. The front plate reduces the apparent size of the gargantuan air intake but doesn’t actually do the car any favours.

Toyota says the GT 86 is the smallest four-seat sports car on the market. It will also likely be one of the least expensive, and the basically trimmed-out interior furthers that impression. The GT 86’s innards are attractive, however, and very purposeful. But it looks like the interior of a car that wants to be driven rather than caressed.

Overall impressions have been and continue to be nothing but positive in the automotive universe. The GT 86 is not as stunning as the Scion FR-S concept, but unfortunately, this is the nature of bring a new automobile to market. Impress us, get us talking, then get real with the production car and disappoint us just a bit.

The Toyota GT 86, the Scion FR-S if you will, is now pictured in production form. The fact that this car exists is exciting enough. That Toyota has also made a good-looking car, one that is lightweight and engineered to be a genuine driver’s car, well, that’s like a heaping bowl of strawberries on top of a burbly rev-hungry boxer four-cylinder.

The gallery below is filled with twelve exterior shots and two interior pictures of the 2013 Toyota GT 86. Peruse and enjoy.

Related From GoodCarBadCar.net
Scion tC Monthly And Yearly Sales Figures
Will The Toyota GT 86 Be The Best Drifting Car In The World?
2013 Ford Escape vs. 2012 Honda CR-V: Concept vs. Production
Monthly Charting Of Sporty Car Sales In Canada And The USA