TOP 5 CARS THE POLICE SHOULD BE DRIVING

We started with the mafia, moved to government leaders, and are now somewhere in between.Top 5 week continues with the polizia. The politi. The policia. Why, in North America at least, are Ford Crown Victoria’s the default choice? Why is it special when a police force realizes that Dodge Chargers/Magnums make a much better vehicle?

Cops want space (especially in the front passenger area and the trunk), low-down torque, and maneuverability. The car needs to be safe. And it will be helpful, although not completely necessary, to have a front bumper capable of pushing lame-duck Dodge Neon’s off the I-10 in Houston. So, what have we?

#5- FBI AGENTS WOULD LOVE GMC’S ACADIA: The FBI never wants to stand out too much in public. (Although lunching beside them in D.C. down the street from the Hoove

r Building saw plenty of badge flashes.) A Crown Vic may be bland enough, but it makes agents look like any other cop. Man, you ain’t just a cop. You’re an agent of the Federal Bureau of Investigation. Drive something with a bit of swagger. General Motors is once again on the upswing. They’ve got great new crossovers. The Acadia can be equipped with all-wheel drive, so it’s already a step ahead of the Crown Victoria. You guys always look tougher in big numbers, and the Acadia can take three-rows worth of y’all. More horsepower (275) and only a slight loss of torque. Similar fuel economy. A zippy little 7 and a half seconds to 60mph. This looks like the new vehicle of the FBI. General Motors is apt to give you a fleet deal, especially on the GMC version of the trio. The Buick Enclave is too good-looking and, besides, rolling up to a NYPD-controlled hostage situations in a Saturn wouldn’t be tough. At all.

#4- NEW RCMP COMMISSIONER NEEDS TO BE SEEN IN A HONDA RIDGELINE: He’s a different kind of c

ommissioner, so he needs a different kind of vehicle. How ’bout a truck that isn’t a truck, but is certainly no Crown Victoria? William Elliott isn’t a cop, he’s a bureaucrat. So, drive a Canadian-built vehicle which can take you and your aides to the rough roads of northern Ontario but still cruise cross-country in comfort. Cargo capacity is limited, but then again, Elliott doesn’t have a uniform. And hey, there is a trunk underneath the cargo bed. The Ridgeline has some getaway power (247 bhp), in case any detachments ever run you out of town. But this is just a small V6-engined truck, so nobody will accuse you of excess via corruption. Ridgeline’s aren’t cheap, but this is most assuredly not the Prime Minister’s new Acura MDX.

#3- ‘MANHATTAN SOUTH’ NYPD PATROLMEN – SCION xB: Hold on a second, don’t get fidgety. How do you park big American boats in the downtown core? Remember after 9/11, cop cars were especially disorganized as the officers arrived at the WTC Towers, creating problems for the next batch to get close. Were the cops to blame? Of course not. The massive F

ord’s, with their decades-old engineering, took up too much space. The new Scion xB is, granted, not quite as cool as the original. That’s ok. Cop cars aren’t all about ‘cool’, ya know. This is a serious matter, can’t you tell? The Scion offers bucketloads of interior capacity, amazing fuel economy, and spectacular maneuverability. We couldn’t suggest the new smart fortwo, after much deliberation, because there’s no back seat. Sometimes cops, even in good ol’ Manhattan, make arrests. And the felons are placed in the rear compartment. Put your bulletproof barrier in between the Scion’s front and rear, and you’ve got yourself a cop car. With 158 horsepower and seven extra miles for every gallon in the city – compared with the old Ford – patrol personnel will still cruise to the scene of the crime in haste, but the hundreds of of them won’t be contributing quite so heavily to the smog above us. Scion’s are ripe for customizing. In fact, that is Toyota’s intention. Imagine each new recruit heading to the Scion dealer to pick out their new lights and wheels – that’s what GCBC calls ‘making your work your own’.

#2- UNITED STATES SECRET SERVICE STICKS WITH SUBURBANS: Who ever said this article was me 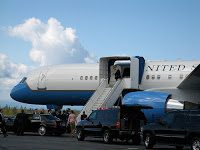 ant to change everything? Top 5 Cars Police Should Be Driving. It just so happens that the Secret Service has already made a good choice. Sure, Suburbans are large and lumbering. As far as people miles per gallon, the Secret Service makes Suburbans efficient. Economical even. General Motors has such a variety on offer: Chevrolet Suburbans and Tahoes; GMC Yukon and Yukon XL, Cadillac Escalade and Escalade ESV. The engine and trim level of your choosing. Followed by the kind of healthy up-armoring the troops in Iraq could only wish for. From 320 horsepower up to 380 – and more in the Cadillac – the ‘Burban can haul. Better yet, it’s an oddly pleasurable vehicle to drive. Even a compact car can make itself drive big, and it is that fact which enlightens us to the Suburban’s best quality: it shrinks. Not visually, and not on Chevrolet’s spec chart. The Suburban drives like a much smaller vehicle. Many thousands of pounds, a few hundred horsepower, perhaps 8 individuals on board, and yet it feels more like a TrailBlazer than the TrailBlazer itself. Decent visibility, relatively sharp steering, plenty of go-power. The Suburban/Yukon/Escalade is where it’s at. Restricted to specific needs though this last may be, the Suburban still ranks as the second best choice.

#1- WATCH FOR CALIFORNIA HIGHWAY PATROL IN PONTIAC G8′s: The G8, nee Holden Commodore, is the genuine Aussie Rules automobile. Rear-wheel drive with an optional V8 and a conservate but handsome design. It may give Pontiac it’s groove back. And that groove disappeared long before I appeared. The G8 isn’t here yet, I realize, but when it arrives, expect the Pontiac to run down most any criminal in most any vehicle. The Scion and Pontiac both offer manual transmissions, despite the level of disdain copper-tops would have toward such gearboxes. Even the V6 G8 will likely have 300 horsepower, expect the biggest bruiser to equip itself with over 400 bhp. There’ll be tighter handling and sharper steering than normal General Motors sedans, although not matching the standard of the best Euro sports sedans. Holden is GM’s Australian subsidiary and the developer of the defunct Pontiac GTO. What came to North America as a GTO was basically the run-out editions of the long-serving Commodore coupe. What we will see in the Pontiac G8 is Holden’s new Commodore – which basically means new hardware, rather than recycled. Cops could apply ‘Intelligence’ to their name if and when they stick red and blue lights in the windshields and on the roofs of the newest Pontiac. This would cause us to fear the G8 even as we gather our excitement over GM’s decision to harness its Aussie connections.