2010 will not be a year soon forgotten by lovers of the Chevrolet Camaro. Finding 81,299 U.S. buyers was one thing, doing so at the expense of the Ford Mustang is another.

Ah, but here’s the good news for Ford Mustang lovers. Mustang sales were up 10.6% in 2010. So Chevrolet wasn’t exactly debiting Ford’s account when selling Camaro after Camaro after Camaro. Together, Chevrolet’s Camaro and Corvette along with Dodge’s Challenger and Viper, the Ford Mustang, and the Cadillac XLR, topped 205,000 sales in 2010. That U.S. sales figure compares rather nicely against 110,347 sales of the 22 other models in the two Graphs below.

GoodCarBadCar.net has clearly come out in favour of the Ford Mustang, particularly the V6-engined Mustang, by naming it to 2011’s The Good 12. It’s still worth mentioning that the vast majority of these cars aren’t boring, and it’s not just because they lack rear doors or because they have large engines under their hoods or because many are convertibles. GoodCarBadCar.net wants boring cars cut out of the marketplace. For the most part, the cars in these two Graphs are exciting first and foremost because they feature individualized styling. The Mercedes-Benz SLS AMG sounds like a 1960s muscle car being shot out of a Saschen class frigate, and that’s a good thing. But isn’t it wonderful that the SLS AMG looks nothing at all like the Nissan GT-R or Porsche 911 or Audi R8. The same could be said of the like-it-or-loathe-it Honda CR-Z: it sure doesn’t appear similar to the Volkswagen GTI or Scion tC.

Now we’re not suggesting you flip a coin and choose any one of these cars – the Mitsubishi Eclipse should be avoided and you really should try a Ford Mustang in V6 or V8 form regardless of your Chevrolet predilections – but it’s nice to know that in this era of stifling environmental concerns and Chapter 11s, you can buy spectacularly unique four-wheeled machines. 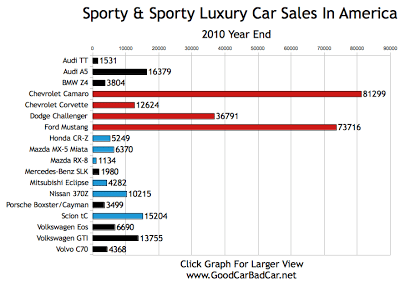 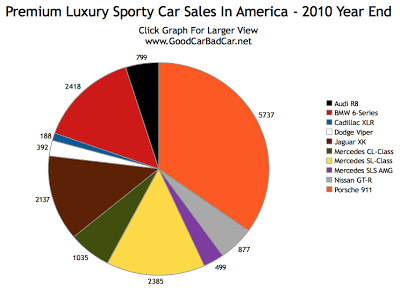