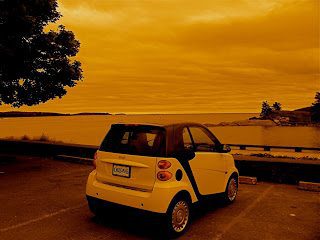 Not for a minute would any faithful GoodCarBadCar.net reader doubt The Good Car Guy’s love for the smart fortwo. Mercedes-Benz’s city car has been an economical competitor in the USA since model year 2008. North of the border, Canadians were served the diesel smart fortwo CDI as far back as model year ’05. In both The Good 12 and The Good 12 v2.0, smart’s gasoline-powered car made its presence known amongst eleven other admired vehicles.

Cutting straight to the heart of the matter, why is the fortwo considered by some to be wondrous but by others, it’s wretched? Pay attention to this simple explanation: for those who wish to dine on a lovely barbecued steak for supper, a fork and steak knife will work perfectly. Does that mean a spoon sucks? No, but in this specific situation, the spoon can’t accomplish the task. On the other hand, when it comes time for Frosted Flakes in the morning, that spoon will be the perfect tool.
Check Out The Smart Fortwo in GCBC’s Top 25 Memorable Debuts 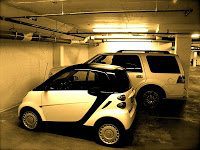 Let’s get the smart’s negative factors out of the way first. Cargo space isn’t overflowing in true Grand Caravan style yet I’ll still guarantee you’ll be pleasantly surprised with the amount of cargo capacity found behind the two seats. Power is far from plentiful. For daily driving, however, you’ll rarely want for more. Fuel economy isn’t otherworldly. Still, the vast majority of vehicles available in North America use far more fuel.
What’s to like? Highway fuel efficiency is better than any midsize hybrid (Camry, Altima, Fusion, Aura). A surprising ability to carry 12 cubic feet of cargo, as much junk as fits in the trunk of a Honda Civic, ain’t bad either. And while 70 horsepower sounds piddling, so does 1,808 pounds, the weight of the smart fortwo. Apart from these three major categories, the smart’s most charming feature is its driving quality; something that couldn’t be said so strongly about the previous-generation car.
With slight increases in wheelbase length, overall length, and width, the smart fortwo now drives more like a “real car”. That’s not to say the first-gen car wasn’t fun, but it was fun partly as a result of weirdness. The newer car copes with rough streets like a vehicle developed on roads outside of Catalunya.
Read About The Fortwo’s Major Future Competitor, The iQ
Automatically, three sensations apply to anybody taking their first drive in a fortwo. Approach the car from the rear, take a look in the rear window, then approach the driver’s side door to hop in. Expect to take one or three steps too far. Nobody anticipates gaining entry at the rear corner. Next up are the engine sounds emanating from something, somewhere directly behind and almost beneath you. The 1.0L triple produces a truly glorious thrum; Porsche-like in its rhythm. Up to this point you’ve accepted the fortwo’s dimensions. Then comes the time for reversing out of your parking spot and, with a small right turn of the neck, your eyes see the rear window right there. Oh, so this car really is as small as they say? Yuh.
Ignition takes place between the driver and passenger smack dab behind the gear lever. Versatile cupholders sit ahead of the stick. Mechanisms for both windows can be found on the driver’s side door now… thankfully. Switches for power locks are underneath the stereo, conveniently located in practice if not in theory.
Start up the 3-cylinder, move the 5-speed automatic’s shifter back into drive (and over to find manual shift mode, which you’ll almost always want) before setting off. Attention: shift into second when the time comes, lift off the throttle and get back on it as if you’d disengaged and engaged a clutch. Repeat for third gear; fourth; and fifth, although you’ll be able to do so more quickly at higher speeds. Treat the smart fortwo’s tranny like a truly clutchless manual and you’ll enjoy shifting rather than be pained by its idiosyncrasies.
Watch The Smart Fortwo’s Crash Tests
Whipping the fortwo out of a downtown parking lot into areas fully populated by vehicles and pedestrians is a revelation. Visibility is so complete, all fears of renegade walkers are stripped away. Don’t think for a moment that 18-wheelers or cube vans become a menace, either. The smart is small enough and – it must be clear – powerful enough to intentionally squirt away from intersections into the path of larger oncoming automobiles. Considering the lengths to which new vehicles have gone (Honda’s Accord gains 3 inches every generation), it’s not difficult to understand the joys of zipping around cities in the smart fortwo, a car 88 inches shorter than a new Accord.
Theories surrounding the smart’s perpendicular parkability are challenging to reproduce in the real world. Contrasted with the aforementioned Accord, the smart fortwo is 33.4 inches longer than the Accord is wide. In certain situations the fortwo could be parked against the curb, opposite to the flow of traffic. In two weeks with the smart in a downtown environment I’ve yet to discover a parking spot capable of handling the smart fortwo in this unique manner. 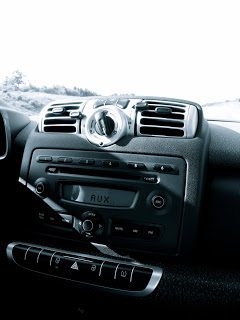 For most people, however, the real world includes far more than urban situations. It’s on a twisty backroad that the smart’s surprises really kick in. Forget maintaining sight of almost any other car’s rear bumper on the straights. Rear-wheel drive dynamics, paired with the traction given by the rearward placement of the engine underneath the floor behind the occupants, makes for joyous cornering. Keep the throttle pinned to regain sight of the car that had previously pulled away. Enjoy the jig and jag of the steering wheel while selecting your line. No, this doesn’t compare with a Mitsubishi Evo X or Nissan 370Z. But it’s a whole lot more fun than any of the other lowest-priced cars in North America. Moreover, it’s a whole lot more fun than most mainstream front-wheel drive cars.
Passenger comfort is sublime. Seats are worthy of luxurious living rooms. In fact, recent flu-like symptoms culminated with back pain for which the smart’s seats were the only cure; no joke. Reaching the iPod auxiliary jack in the glovebox is easy, which says a lot for the remainder of controls, all of which are closer. The wheel does not tilt or telescope, yet the perfect driving position is found quickly.
1 Year With A 2009 Smart Fortwo – July 2010
What’s left to bring the smart fortwo down from its perch? Ride quality is stiff; very stiff. Two factors contribute to its spine-shortening ride: wheelbase length (rather the lack thereof) and decent handling. No vehicle this tall and narrow would be able to tackle the twisties this capably without a truly tight suspension. Besides this, most bumps and yumps and dips and holes are struck with the rear wheels at pretty much the same time as the front pair. That’s a problem. For some people, it’ll be so great a problem that they’ll ignore the smart fortwo altogether. Others, The Good Car Girl and The Good Car Guy included, love the advantages a short wheelbase provides. The smart is lovingly small, spectacularly efficient, and wonderfully fun to drive. 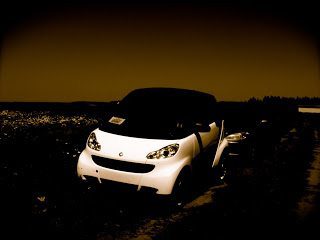