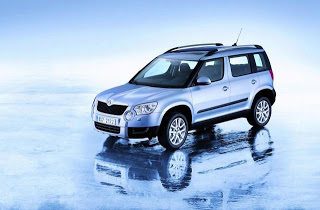 PRODUCTION SKODA YETI – ACROSS THE POND

Back when The Good Car Guy started talking about Skoda, Volkswagen’s Czech subsidiary, the Yeti had been revealed in Geneva of ’05 to be super-funk, a Skoda Roomster with more SUV-like characteristics. The production Yeti is ready now, as shown at the Geneva auto show, and while still holding a great measure of appeal to urban Europeans, the Yeti has lost plenty of funk.

Notice how a Ford Flex without the contrasting roof looks…. downmarket? Ever realized how the Toyota FJ Cruiser would be plain without its white roof? Well, the concept Skoda Yeti used a white roof as a way to set itself apart. In production form, the Yeti has lost that definining characteristic. The double-bubble headlights stick around. Rear door handles move to a conventional location. Width appears to have been stripped, whether or not it actually has suffered at the hands of the accountant/engineer conundrum.
Here’s where the Skoda story gets good, though. With low-po engines featuring no more than 169 horsepower and a position in the VeeDub family that predestinates Skoda to the lower rungs of price schemes, the Yeti will be a distinctly affordable cute-ute. Available with two or four wheel drive, a classy interior, loads of space, and terrific fuel economy, the disappointment over missing out on the concept Skoda Yeti’s exterior could abate somewhat. That’s not to forget other able competitors in the category, most notably in this case, the Volkswagen Tiguan. You may’ve heard of the Toyota RAV4, Honda CR-V, and Subaru Forester, as well. 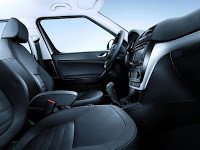 As usual, The Good Car Guy struggles with the purpose behind wicked concepts like that which led to the Jaguar XF. Which would you, as an automaker’s CEO, prefer: excited previewers at an auto show who are somewhat disappointed prospective buyers in the showroom, or, impressed previewers at an auto show who remain impressed in the showroom?
Again, the production Skoda Yeti is nice. What it could have been, oh Good Car Nation, is nicer. 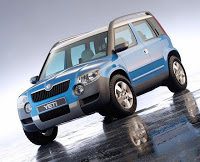