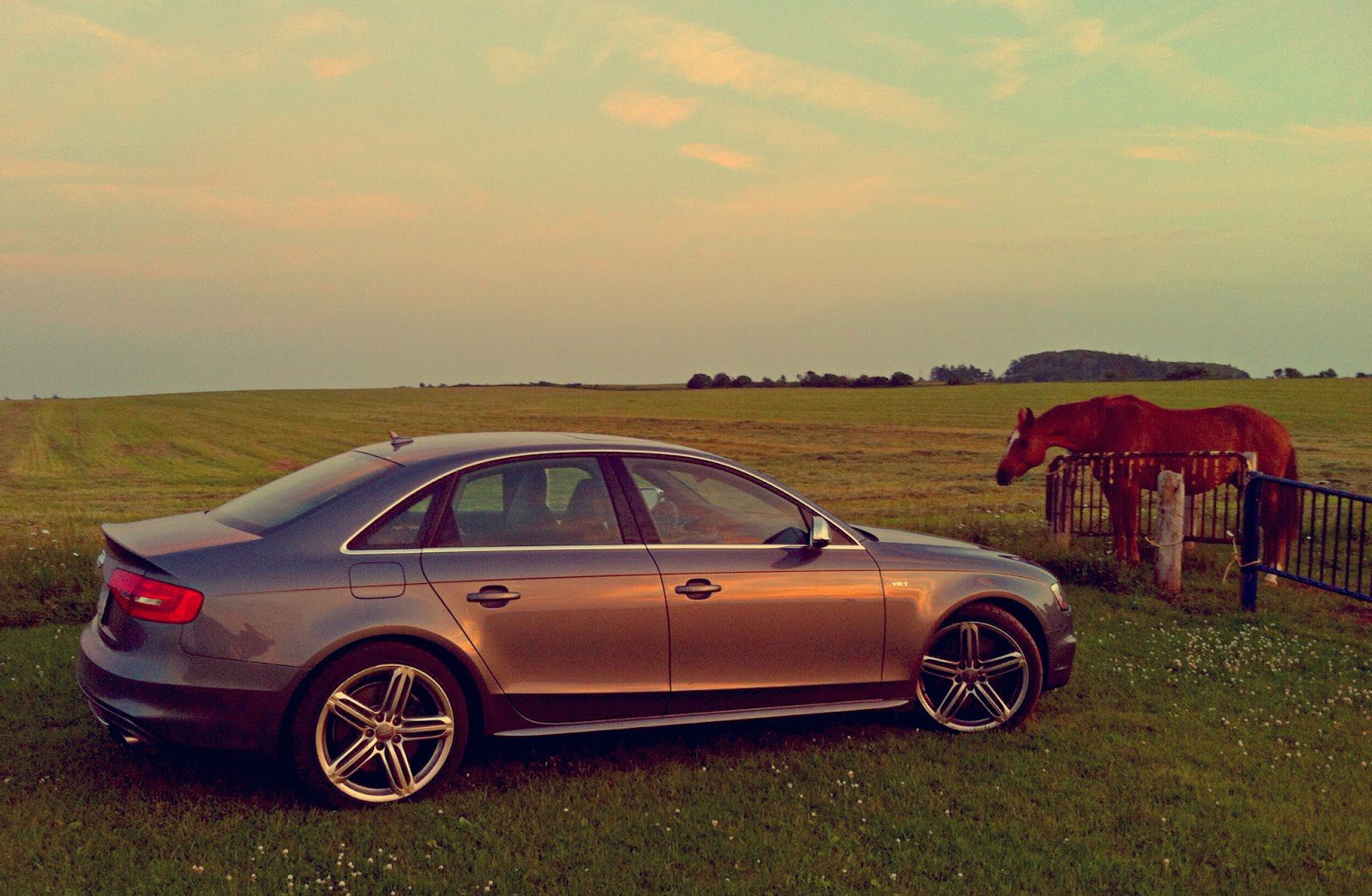 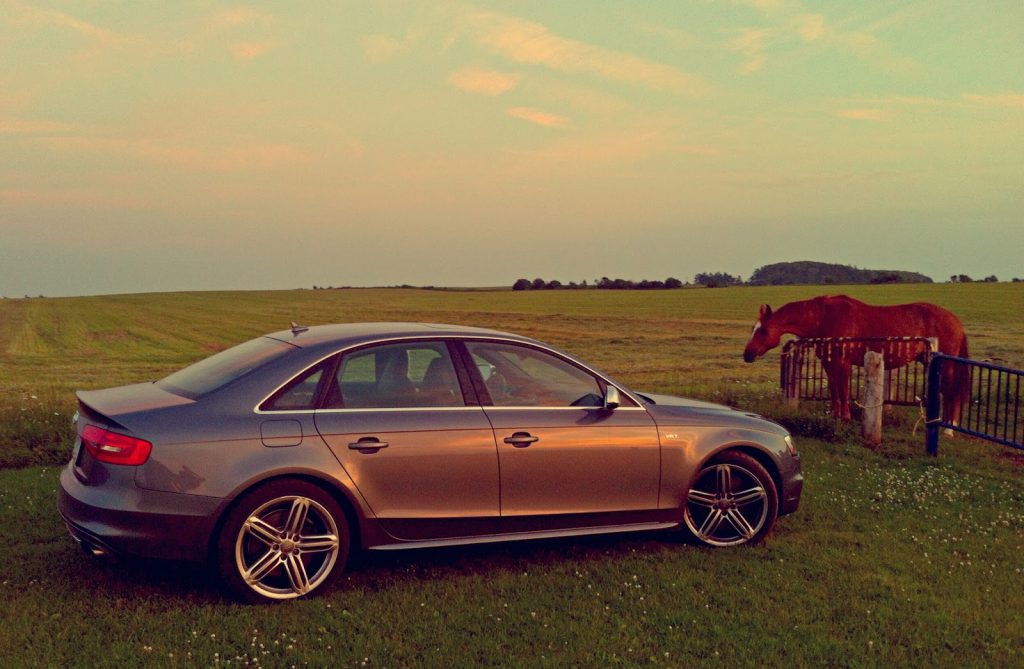 As the youngest son of a travelling salesman, I spent many of my formative years in the back seat of a various Audis. There were five Audis in all, consecutively, including a red Coupe Quattro that left very little room for my brother and I to wind up for a high quality punch to the kidneys.

My four older siblings had followed my father’s lead by being born in Prince Edward Island, and as a result of the family’s heritage and the island’s beauty, we spent many hours in those Audis travelling between Halifax, Nova Scotia, and Cavendish, PEI, where our RV was often parked for a stretch during the summer.

Those were exciting times for PEI, as “No Vacancy” signs were common, three or four or more ferries at two ends of the island were packed with visitors, and more tourists lined up for hours at the terminal in Cape Tormentine, New Brunswick.

My father drove Audis because his winter travels required all-wheel-drive, because other buyers of German cars bought Benzes or BMWs, and because he enjoyed the sudden onset of post-lag turbocharged power.

He enjoyed the rush of being a bit behind schedule and racing along New Brunswick’s Route 16 to catch the ferry on the New Brunswick side of the Northumberland Strait.

Radar detectors were legal; speeding tickets (and gas) were cheap.

Providing thorough online coverage of North American auto sales data isn’t the dream job of my best friend, a cop. Neither is this the pursuit of my MBA-educated brother-in-law. The lobster fishermen of eastern PEI aren’t sending GCBC their resumes, either. But there are times when the advantages of this job bring the past quickly into the present.

After a few days with the 2014 Audi S4 in our little village of Eastern Passage, Nova Scotia, we were granted extra time with this successor to my father’s Audi sedans in order for my own newborn son to enjoy one of Germany’s best in Canada’s best. 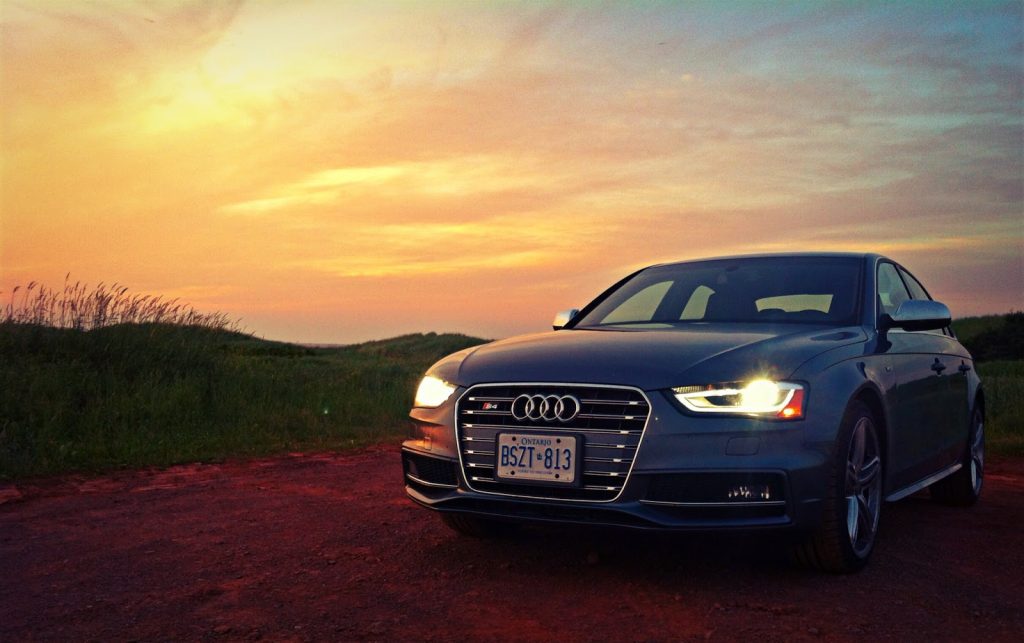 Radar detectors are illegal, speeding tickets (and gas) are expensive. Yet with nostalgia on the S4’s side, in addition to a surely underrated 333-horsepower supercharged V6, we happily made the trip to Prince Edward Island and back and proceeded to look under the couch cushions for the money needed to buy our very own S4. Forget minivans and crossovers and crew cab pickups: isn’t this how children are supposed to grow up?

PERFORMANCE > LUXURY
In the UK, where it’s still available, the Audi RS4 costs 39% more than the Audi S4, but officially, it only provides 33% more power. In truth, this S4 feels like it punches far above its stated power output, accelerating to 100 km/h in five seconds in spite of a near 4000-lb curb weight.

If Audi were to acknowledge that this car makes, say, 375 horsepower, the RS4 that costs 39% more than the S4 would produce only 18% more horsepower, a raw deal many potential RS4 customers wouldn’t like.

Rarely accessible on busy Nova Scotian highways, this high-revving happiness was easily tapped into on barren north shore roads in PEI with less than a moment’s notice.

It’s the equivalent of one of Louis L’Amour’s Sackett characters demanding top gallop from his horse when the horse is tied up in the stables, and supernaturally finding himself on top of that very same horse on the other side of the field. Right. Now.

The Audi S4 always feels as though there’s more power in reserve than there is power being used.

And while Audis have been criticized in the past for their inertness and lack of communication, the depth of this S4’s composure inspires a great deal of confidence.

No matter the quality of road – bad, very bad, or worst paved road ever – the Audi was never flustered.

Of course grip is never-ending, but it was the S4’s ability to both defeat a road with superior suspension calibration and work alongside a road by accelerating into, through, and out of a corner that impressed the most.

This is all-around performance, and if not the most communicative, it is tremendously useable in all circumstances.

The S4’s dynamic repertoire isn’t perfect, as the brakes are too heavily assisted for my tastes and straight-line highway tracking suffers from the S4’s surprising focus (and wide, sticky tires). The dual-clutch 7-speed transmission is never lacking intelligence at speed, downshifting brilliantly at just the right moment when decelerating, but it can be tricked when dawdling.

The overriding character trait of this S4, from a performance perspective, is of a car that generates a great deal more power than Audi says it does. 370? 380? 390 ponies? I wouldn’t be surprised. 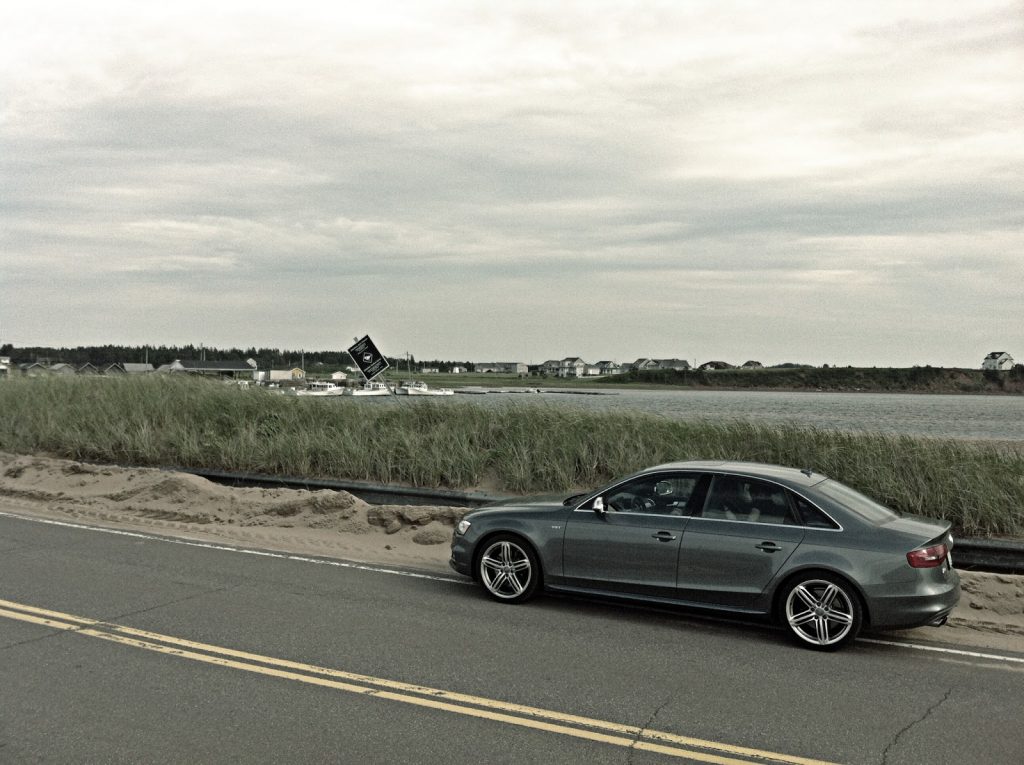 MAKE YOUR SELECTION
Better yet, the S4 is tuneable right from the driver’s seat. All cooperating pieces – engine, transmission, suspension, steering, sport differential, engine sound – can be called into more relaxed Comfort mode at the push of the Drive Select button just in front of the shifter; above the climate controls. The ride remains rather firm, but the car’s overall demeanour definitely becomes more relaxed.

I spent very little time in Auto mode, but Dynamic is a different world. Most apparently, the sound emanating from the S4 becomes quite angry, the engine more responsive, and the steering much heavier. In the case of the steering, unnaturally and artificially so. But Audi has also provided an Individual mode where you can place any of the aforementioned items under any of the three banners. Don’t like the heavy steering? Opt for Comfort steering while leaving everything else in Dynamic, for example.

This isn’t gimmicky. It’s three cars in one, and it’s worth more than the $1500 Audi Canada asks for the system, sport diff included. 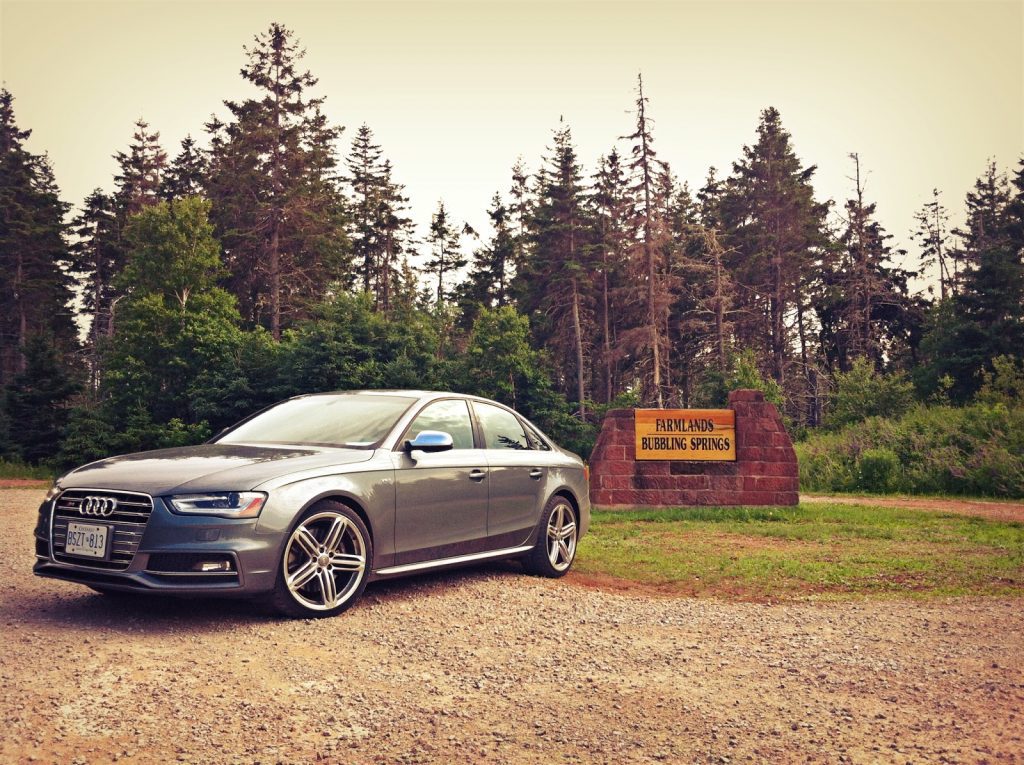 INSIDE
Nothing surprises inside the S4, as Audi’s renowned interior design and build quality is readily evident. There are a handful of blanked-out switches that will never cease to offend the potential buyer of a $60K+ car, but from the leather stitching on the steering wheel to the leather bagging around the shifter to the perfect thunk of the doors, this is Audi doing what Audi does best.

Audi’s Multimedia Interface is operated easily with a large control knob that runs the high-mounted screen and a volume knob that also punches left and right for, as an example, next or previous track. There are quick menu options surrounding the main control knob and another layer surrounding those metal-look buttons for easy access to the main menu or previous screen.

The simplicity of MMI provides a real contrast to the climate buttons, where the temperature knob is also used for fan speed (only after clicking the fan button) and vent choices (only after selecting the mode button), a strange extra-step solution in an intuitive, elegant cabin. 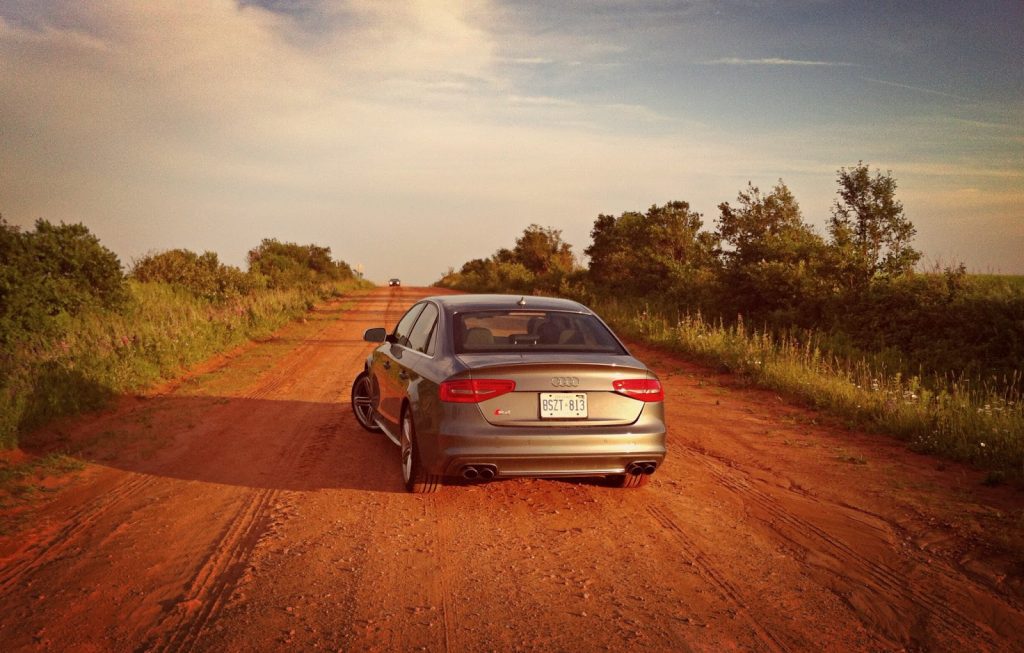 FAMILY CAR?
Like all A4s, the S4’s rear seat and trunk are too compact. With the trunk, however, that’s acceptable, as it’s shaped like a big box. There was lots of leftover space after two large suitcases and a guitar case were tossed in, and there are helpful hooks, as well. Even with the slimmest of child car seats, cramming in two adults behind two adults in the front isn’t enjoyable.

COMPETITION
In Canada, the large Audi A4 range is outsold by its two key rivals, the BMW 3-Series and Mercedes-Benz C-Class, but it’s more popular than either the Cadillac ATS or Lexus IS. Like the 3-Series and C-Class, A4 sales are in decline (though A4 volume isn’t falling as rapidly) as the ATS and IS make headway and buyers quickly transition toward vehicles like Audi’s more popular Q5 crossover.

Still very handsome, and much more mature-looking than the B6 A4 from the early part of the last decade, the current A4 does look very familiar. Maybe too familiar. It’s been around since the 2008 model year, and virtually all rivals look newer and fresher, if not better. 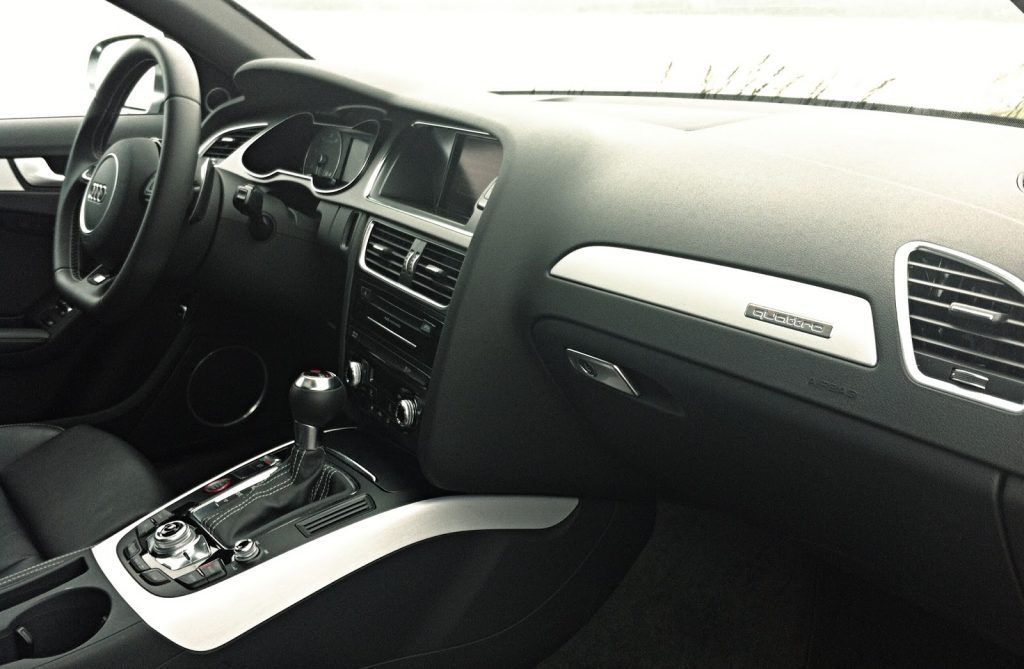 Though not BMW M3-like in its performance, the S4 does stretch the A4 range beyond the purview of BMW’s 335i and the Mercedes-Benz C350, a fact made all the more apparent on rural two-lane roads where overtaking was both demanded and delivered in an instant.

PEI is more than just Anne of Green Gables and potatoes. There are miles of beaches, amazing restaurants, and cute little red foxes in abundance. Germany is more than just Beethoven and Oktoberfest. As evidenced here, their car industry knows what they’re doing, too. And as we found out during the week of the S4’s visit, they turn out some decent soccer players, as well.

Alas, the only things we found under the couch cushions when we returned home via Nova Scotia’s less exciting four-lane divided highways were Dr. Seuss books and a pair of grey, rubber-bottomed Baby Gap socks. Perhaps next time Audi Canada will let us have a look at the more affordable S3 instead. That could work.