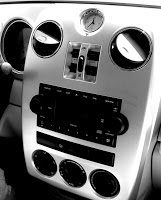 If you leave Chantilly, Virginia and head west towards Front Royal, consider yourself very close to Shenandoah National Park. The Skyline Drive heads south from Front Royal until the park ends and you enter the George Washington National Forest. You can soon consider yourself on the Blue Ridge Parkway, which will take you around Roanoke and into North Carolina. Skyline Drive , from the north at Front Royal to the south at Rockfish Gap, runs 105 miles (170km). However, you are not driving the typical highway speed of a mile-a-minute, nor do you wish to.

We were definitely enjoying the space of a Chrysler PT Cruiser. There are a few quirks I could do without in the tall retro hatch, such as window controls above the stereo; underneath the clock. Didn’t I adjust? Not quickly, and even after 12 days the adjustment seems ridiculous. Besides, once home, there was no adjustment required for the normal position of window controls. Overhead lighting was under the sole jurisdiction of the driver at all times; and placed far in toward the wheel on the left control stalk. Awkward.

Radio reception was abysmal. When I say abysmal…. I mean… abysmal. One drive in another automobile, seven years the PT’s senior, made clear that the radio difficulties were not peculiar to the mid-Atlantic states. Relative to the four passenger doors, either I was stupid (along with The Good Car Girl and brother) or the door design was poor. For instance, leading up from the side mirror to the highest point of the door edge was a terrible curl. My head is not prepared for that. We predict straight edges or something somewhat akin to straight. Thud, crack, bang, ouch. At least twice a day.

Cupholders were way to low for easy access. While driving, one’s right arm would need a dose of Go-Go-Gadget to reach the drink and still have a head that was anything close to watching the road.

Whine whine whine, complain complain complain. There are specific circumstances in which these complaints surface. Impossible to read map on a busy and dark Virginia highway trying to find our hotel? Blame the overhead lighting. Driving the Skyline and wishing the camera could extend out the window just a bit? Try finding those window switches… grr. Want some hoppin’ music for such a beautiful drive? Not gonna happen. I mean, not gonna happen. Out and in and out and back in the car taking pictures on the 3500 ft high overlooks in Shenandoah? You’ll soon be concussed. Want your drink? Be sure not to drive off the side of Signal Knob while reaching.

But always the optimist, I discover these things. The Chevron at Elkwallow only charged $2.97 a gallon for regular gas, cheapest we saw all trip. The PT Cruiser was only gent

ly sipping, which, in spite of the low speed, seemed impressive considering the mountain climbing. We were sitting in remarkably comfortable seats. Must’ve been inspired by the former Benz dominance in the company. The Chrysler had no trouble pulling up to overlooks at Gooney Run, Jenkins Gap, Hogwallow Flats, Gravel Springs Gap and Little Hogback. From the very high point near Little Hogback, we began to descend back to the 2304 feet at the Thornton Gap Entrance Station.

Exiting the park we headed for the caverns at Luray, west of Skyline Drive. 500,000 people do a 2 km walking tour underground each year. Of those 500,000 visitors and their many tour guides, some throw substantial amounts of money into one specific underground pool. Over the last fiftyish years, $623,000 has been collected from that pool and given to charity.

That pool is not the best reason to travel to the Luray Caverns. Clearly, it will inspire you to drain your pockets after already paying the $19 entrance fee. T’would be far better to pay attention to the stalagmite and stalactite formations; breathe in the cool, moist 14ºC air; listen to the stories of the discoverers; and check out the small car museum next door. Home to one Hispano-Suiza; one Bugatti; a couple Model T’s; and at least one ancient Rolls-Royce. The PT Cruiser’s fenders fit in quite well.

Before we left the D.C. area we considered driving back to the hotel by way of the main highway. Having already done over 30 miles on the Skyline Drive, we were positive in our resolve to experience the reverse drive with different lighting and angles and the low speed limit. There would be something sweet about a 10/10ths drive on the Skyline, but not your first or second or even fifth time through. We’d have missed so much.

Cyclists, hikers, and bikers abounded. The adjoining picture shows that some people had muscle cars which would have savoured an aggressive drive. The collective enjoyment of everyone we saw was an impressive thing to behold in itself. Plenty of oohs and aahs at the overlooks. Many impressive automobiles being used solely as seating and air conditioning units to effectively transport humans to the next overlook.

The PT Cruiser fulfilled its role on the only exclusive Virginian day of our trip. The slow and easy Skyline Drive would be met – within hours – by metropolitan Washington’s rush hour. Hold on tight. 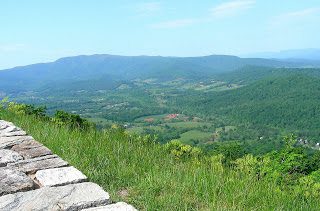