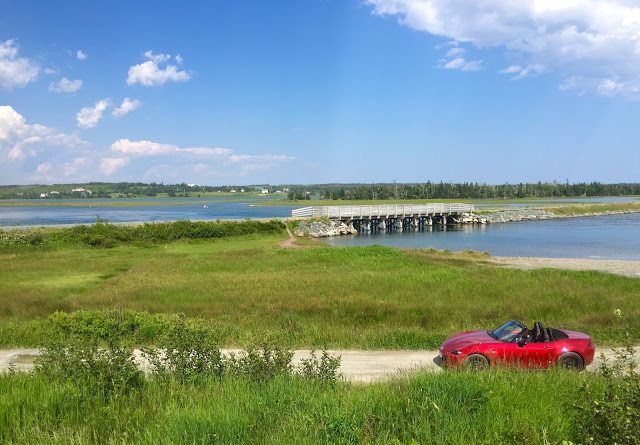 Does the world revolve around GCBC Towers?

But there are times when the proverbial stars align. In the early part of 2015, when winter was in the midst of walloping eastern Canada with all the force of innumerable polar vortices, Toyota Canada delivered to our doorstep a 2015 Sienna XLE Limited AWD wearing Bridgestone Blizzaks.

Fast forward to July 2016. In-laws visiting from Toronto have rented a house which backs on Lawrencetown Beach 12 kilometres from GCBC Towers.

Forecast: Sunny and warm, yes, sunny and warm here even on the often foggy Atlantic coastline.

Mode of transport: Mazda’s new 2016 MX-5 Miata, a GS with the 6-speed manual transmission and the GS-exclusive sport package.

Task: finish work for GCBC, Autofocus.ca, and The Truth About Cars as early as possible every afternoon and drive, roof down, to meet the whole family for supper. 410 kilometres later, we’ve reached a verdict on the fourth-generation Miata.

WHAT IS IT?
Mazda began building Miatas in Japan in 1989. Though rivals – Toyota MR2 Spyder and Pontiac Solstice most recently – have come and gone, and sales of the MX-5 Miata have slowed, Mazda plows on. Thank goodness. 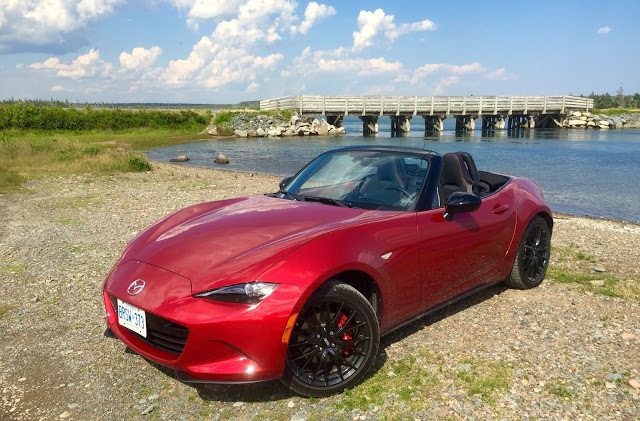 The second-generation NB Mazda MX-5 Miata bowed in 1998 for the 1999 model year. That car’s tenure ran mid-way through 2005, when the third-gen NC began its decade-long run.

The new fourth-generation Miata, code name ND, appeared in front of limited gatherings in the flesh (and unlimited numbers online) in September 2014. Production of North American-market cars began in April 2015.

Canada’s MX-5 lineup is straightforward: there’s a basic $33,795 GX. The 6-speed automatic transmission, which might be fine but is still to be avoided because of the excellence of this manual shifter, is a no-cost option.

HOW BIG IS IT?
Tiny.

The MX-5 does fill more driveway than, for example, the Fiat 500, which is only 139.6 inches long. But the height difference remains significant, and continues to be the dimensional difference that, shall we say, cramps the style of occupants above six-feet tall. The Mazda MX-5’s roof is nearly a foot lower than the 500’s. With a massive hump intruding into the passenger footwell and the windshield header diving for your noggin’ each time you attempt to enter, the MX-5 can be fine for the driver, but your partner may not be so happy.

As for the 130-litre trunk, the official figure is far smaller than the space would lead you to believe. Small, yes, but perfectly formed.

DOES IT WORK?
Only in a handful of ways does it not. Operating the controls for the intuitive but sometimes slow Mazda infotainment unit requires a strange reach farther rearward of the shifter than in any other car we’ve driven. There’s very little space for stuff inside the cabin, and the main storage cubby is difficult to access when you’re driving. Ride quality is just on the acceptable side of firm, though the base Miata GX on 16s or any Miata without the sport suspension would undoubtedly bring about greater cushion. Headroom with the roof up is too tight for taller drivers and brings about a strong sense of claustrophobia. Visibility, therefore, is awful.

But visibility, like everything else, improves with the roof down. Every sensation is heightened. The steering feels more alert, the shifter engages with more precision than you thought possible, the 155-horsepower 2.0L four-cylinder takes on the life of a 175-horsepower 2.0L (thought it’d be nice if it had 195), and you more fervently attack corners only to discover that the Mazda’s surprisingly high limits are as approachable as the girl next door.

Okay, the Mazda MX-5 doesn’t actually change any of its hardware of software when you quickly sling the roof over your shoulder. But that roof drop changes you. Now you want to engage in the same driving experiences that ruin your day when you’re in any other car.

‘;
document.getElementById(“vinads_div”).innerHTML = lfAd;
}
});
Stuck in slow-moving commuter traffic? Roof down, the Mazda remains fun as you shift for the sake of shifting and slot into gaps meant for Cinquecentos and Fortwos.

Need to run down to the corner store for flour on a hot day, a drive so short no other car will have time to get its A/C up to operating temperature? Roof down, gears shifted, corners carved, and you’re home again, ready to eat biscuits.

Passenger in a bad mood? That’ll change with a few corners, the miraculous appearance of heel-and-toe shifting despite your own limitations, and open air motoring.

To suggest that the convertible aspect of the MX-5 is wholly responsible for making the fourth-gen Miata so great is to deny both its effective deployment of anti-wind-buffeting measures and the fact that other convertibles don’t invariably bring an instantaneous smile to your face. 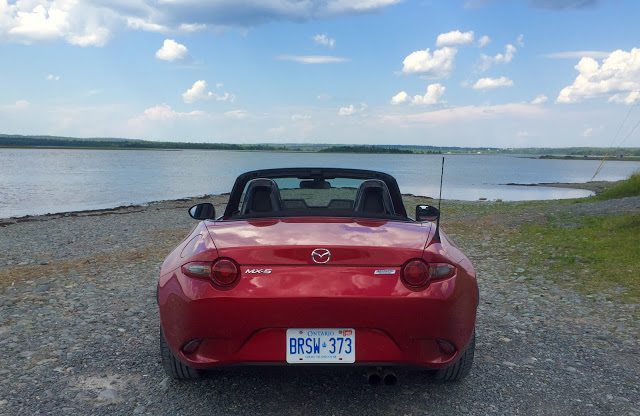 The 2016 Mazda MX-5, however, has the details of driving so perfectly nailed down that you can’t help but applaud this bite-size Japanese automaker for sweating the specifics.

Steering weight is neither too heavy nor too light. That elusive feel auto writers all seek is present, though the level of interactivity through the seat cushion is all the more telling. The Miata is quick enough to be, well, quick enough, but it’s slow enough that it needs the best of you: it needs the right gear engaged at the right time. An battered Integra just left you in its dust exiting a corner? That’s your fault, not the Mazda’s. You needed second, not fourth.

Yes, even the MX-5’s limitations make it better. The naturally aspirated 2.0L four-cylinder that would seem out of place in most sports cars pays dividends here, not just in amplifying the driver-car connection but with fuel economy. Rated at 8.9 L/100km in the city and 6.5 L/100km on the highway by Canada’s Office Of Energy Efficiency (27/34 mpg, city/highway, by the EPA), we ventured rarely onto the highway, drove the 2016 MX-5 like we weren’t going to keep it, and accelerated out of coastal corners like there was something we were trying to catch. The result? 6.9 L/100km.

Have your fun and eat very little resources, too. 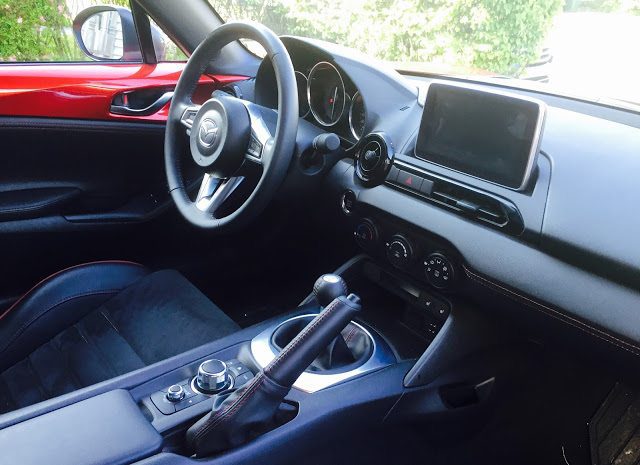 IS ANYONE BUYING IT?
By the end of the first week of July, Mazda Canada had already sold more MX-5 Miatas in 2016 than in all of 2015. At the current rate of growth, 2016 will likely be the MX-5’s best year of Canadian sales since 2007, when 1814 were sold. Mazda Canada reported four consecutive months with more than 100+ sales between March and June, a feat the automaker had accomplished only once in the previous 33 months. Naturally, the MX-5 is a low-volume model. 72 passenger cars sell more frequently in Canada.

South of the border, U.S. sales are on track to rise above 10,000 units in 2016 for the first time since 2008. Again, the pace, even for the re-launch of an all-new model in a market that’s larger than it’s ever been – just as in Canada – isn’t the pace to which Mazda was once accustomed. U.S. volume doubled in the first-half of 2016, year-over-year, but even with five-digit figures by year’s end, Mazda will be a long ways off from the 25,000-unit average the company achieved between 1989 and 1995.

SHOULD I BUY SOMETHING ELSE INSTEAD?
Ha!

HOW MUCH SHOULD I PAY?
Gone are the days of the sub-$20K Mazda Miata. This isn’t 1990. But based on the Bank Of Canada’s inflation calculator, the basic Miata has barely become more expensive in the intervening 26 years despite offering way more power, more features, and superior comfort.

And the basic Miata is likely the one to have. The Recaro seats from our test car are enticing, but they’re only available in the sport package on the GS trim, which is already $3400 more than the basic GX before the $4400 sport package is added. We say stick with the basic car, it’s all the Miata you need to engage in the Miata experience: handsome alloys, air-con, cruise, Bluetooth, pushbutton start. Avoid the white and silver paint options and you’ll be happy at $33,795. That’s about $700/month for five years at 2.99% with no money down. 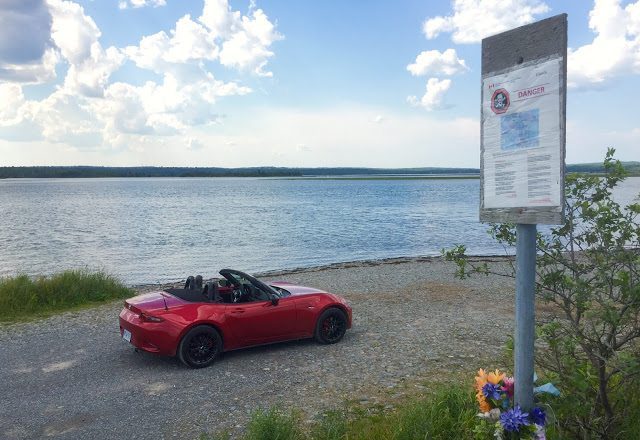 Three letters which, in combination, are impossible not to overuse, or at least overstate, in any review of any Miata. Fun: provide mirth and amusement, enjoyment and playfulness, merriment and pleasure.

Freed from the constraints of compromise, Mazda exceeded expectations. Three times now, Mazda has been forced to update the Miata for modernity’s sake while facing the distinct possibility that, with too much fine-tuning or too little; too much power or too much grip; too much luxury or not enough comfort, they might just ruin it. They might take away the fun.

It’s better than ever.

Timothy Cain is the founder of GoodCarBadCar.net, which obsesses over the free and frequent publication of U.S. and Canadian auto sales figures. Follow on Twitter @goodcarbadcar and on Facebook. The MX-5 was supplied by Mazda Canada’s press office.