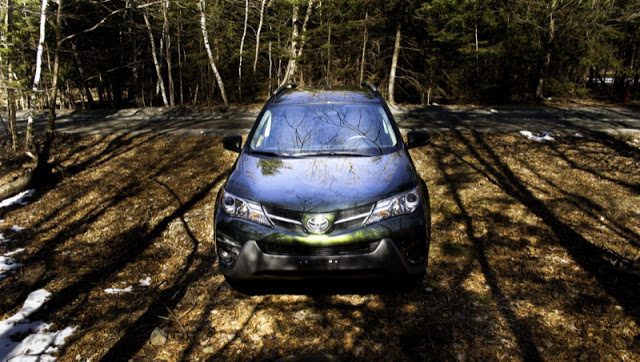 The commuter’s crossover has been located. It has taken the form of Toyota’s smaller, stylized, fourth-generation RAV4.

As I see it, much of what was vital in making a car like, for instance, the eighth-generation Toyota Corolla so successful as a suburbanite’s daily traveler is present and accounted for in this RAV4.

Both the good stuff.

And the bad stuff.

While in GoodCarBadCar’s safe keeping, the front-wheel-drive 2013 Toyota RAV4 LE consumed less fuel in city driving than Toyota and the EPA said it would. Considering that Ford and Honda’s most efficient Escapes and CR-Vs are rated at 23 mpg in the city, this RAV4’s as-tested 26 mpg figure – equal to 13% farther on a gallon of gas – is beyond stellar.

Even an automatic-equipped 2013 Toyota Corolla is rated at, you guessed it, 26 miles per gallon. The RAV4’s 6-speed automatic certainly helps, as its 2.5L four-cylinder, the only engine available, generates 44 more horsepower than the Corolla’s 1.8L. The Corolla also weighs up to 658 pounds less than this RAV4.

Efficiency isn’t the only mark of a commuter’s dream car. A daily drive out of the burbs and into the city requires great visibility, comfy seats, and a modest array of features. The expected content once amounted to power windows which enabled easier payment at tolls, a CD player, and air conditioning. Now we want backup cameras, Bluetooth, and tilt and telescoping wheels.

Most of all, a car with this singular purpose can never be expensive. By that measurement, Toyota’s been kind enough to lower the RAV4’s base price for MY2013. Priced from $23,790, this LE rang in at $24,790 as a result of an aptly titled upgrade package called the Upgrade Package. The package includes a 6-speaker stereo, backup camera, interior display screen, tinted glass, cargo tonneau cover, and painted roof rails.

Alas, those trips to work through school-cancelling winter storms and those summertime commutes which were elongated by roadwork were completed in a daily driver that wasn’t free from compromise.

Wind noise was not kept at bay in Lexus-like fashion. The interior was puke beige. Material choices weren’t up to the standards of modern crossovers like the Honda CR-V. There were no available heated seats; no satellite radio; no backup sensors; no smart key system.

Wait a second: am I talking about the economy car you bought 15 years ago after graduating from university, the same one that all the Enterprise and Budget stores carried en masse, or the new Toyota RAV4?

Yes, a basic 2013 Toyota RAV4 is cheap, but unfortunately, it also feels a bit cheap. There was a rubber seal coming undone where the door meets the roof. The interior was more reminiscent of an 11-year-old Camry than a fourth-gen Avalon, save for a very nice stitched leather-like panel across the dashboard. It’s noisy, not just because of the wind and tires but because of the 2.5L four-cylinder, which is unrefined at low revs. That tonneau cover doesn’t cover a large part of the cargo area near the rear seats. The tailgate that no longer features a massive spare wheel carrier? It’s not terribly heavy, but it’s quite resistant mid-way down. With only a few thousand kilometres on the odometer, the door panels and shifter were thoroughly scuffed.

As far as its economy car connections, ride quality seemed to be where the link was strongest. Strangely, massive potholes didn’t disturb the RAV4 much. There was, however, a constant jarring. The unceasing motion made me look like a bobblehead on streets that weren’t even rough. Bizarre, to say the least. 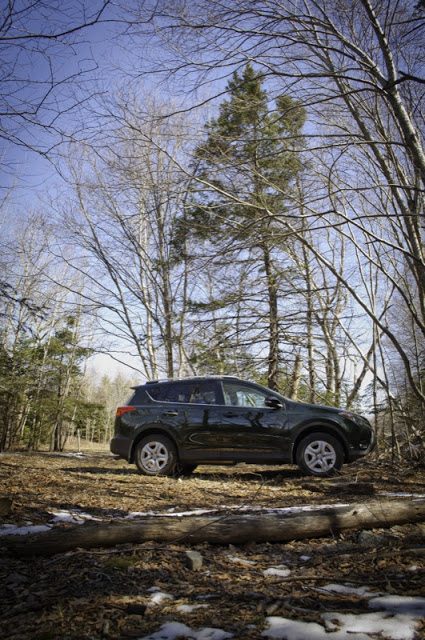 Then again, the RAV4 felt so small to drive. And for a car that’s wonderfully vast inside, this was a welcome trait in city driving. Agile, with light steering and very decent pep, the new RAV4 is the SUV to drive if you need 2076 litres of cargo capacity and the ability to maneuver around the Costco parking lot at grossly illegal speeds. The RAV4’s turning circle is nearly two feet tighter than that of Toyota’s Venza, more than a foot tighter than the turning circle in the outgoing Highlander, and only 3.6 inches wider than the Toyota Corolla’s. The Corolla’s maximum cargo capacity? 348 litres.

What of the open road? The RAV4’s light steering is excessively weightless on twisty roads outside the city. Combined with the frantic suspension, Toyota’s newest small crossover doesn’t feel like a car that wants to be chucked around. But remember that parking lot agility? It’s still present out here, and body roll is kept in check, so much so that the RAV4 feels a little like small cars that, while not completely capable handlers, enjoy showing big cars that they’re not slouches.

There’s certainly nothing commuter-car-like about the RAV4’s lounge of a rear seat or its front and rear ends. It doesn’t look like a Toyota. Newer Toyotas like the 2014 Highlander have no connection to the RAV4’s design, especially its ’05 Benz SLKesque grille. This RAV4 isn’t handsome like the outgoing version or cute like the second iteration, but I applaud Toyota for taking chances, and the looks certainly grew on me throughout the week. It won’t disappear in a parking lot full of lookalikes. Besides, the taillights double as a shelf where you can display picture frames, doilies, and trinkets.

Depending on the degree to which you dislike a firm ride, the 2013 RAV4’s formidable efficiency, impressive footprint-to-volume ratio, and low price add up to a high-value quotient, one that’s contingent on your ability to accept a relatively frills-free environment. Toyota offers a bit more cargo capacity and passenger space than the Ford Escape and the Honda CR-V in a vehicle that’s narrower than the Ford and only four centimetres longer than the CR-V.

Toyota also offers RAV4s with all-wheel-drive and plentiful equipment lists, and they’re all priced under $32K. 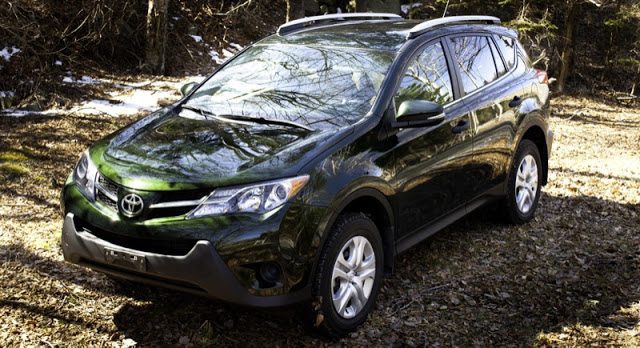 If not in subjective feel, the Canadian-built 2013 Toyota RAV4 is certainly a winner by the numbers, and by its durability pedigree. Therefore, it shouldn’t surprise us to see the RAV4 topping the standings as Canada’s best-selling utility vehicle in March 2013 and as Canada’s best-selling Toyota. The RAV4 outsold the Corolla and the Yaris; it also outsold the combined four-nameplate Prius family, five times over.

Which reminds me, the weekend is over.