Result. Mazda is showing the ’09 Mazda 6 – the North American 6 – and it looks good. This latest Mazda isn’t daring, but possesses clean lines and lasting handsomeness. In the shadow of the 6, purportedly sedan-only in America, the Toyota Camry looks chubby and the Accord begins to appear dull. Does this mean Mazda is about to top the midsize sales charts?

No.
But don’t blame the appearance or driving dynamics. The looks are top notch and Mazda’s typical driving quality should permeate the 6 just as it does vehicles as varied as the MX-5 and CX-9. The 4-cylinder engine is a 2.5L; the V6 is the same 3.7L CX-9 drivers enjoy. 2.5s come with either a 6-speed manual or 5-speed auto. The V6 is equipped with a 6-speed automatic.
Mazda’s first-generation 6 was introduced earlier this decade but was really a continuation of the 626. The 6 was a major bridge as Mazda attempted to carry the reputation of the world’s best selling roadster, the MX-5 Miata, through to the company’s mainstream cars. Even as the first-gen 6 was widely considered to be a perpetual best driver’s car in the midsize sedan category, so now are the CX-7 and CX-9 crossovers in their respective sectors. 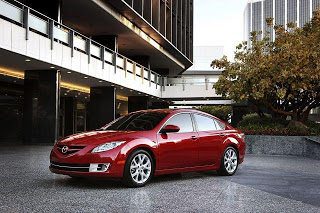