For the sake of thorough reporting and historical context, here are more photos of the upcoming Scirocco. In addition, take a gander at the scIROCco concept that came before it and the Corrado & old Scirocco that preceded it.

Gotta be honest with you: I’ve been thinking about the plight of Volkswagen suits who don’t know exactly how to position the Scirocco and – in North America at least – have decided not to position it anywhere. (Catch Friday’s story here and find the links therein.) Now, I won’t come right out and agree that Volkswagen has no room in their showrooms for the Scirocco, what with the GTI and R32 filling the sport-compact gap nicely.  No, I won’t agree at all.  But when I consider a few facts, I do see VW’s point, even if I don’t like it or necessarily agree. 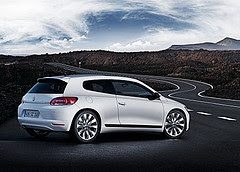 For one, without knowing the price scheme, the Scirocco took a more dramatic styling approach to the hot hatchback ethos.  In other words, it’s a more dramatic GTI.  The GTI is made by Volkswagen, just like the Scirocco.
For two, similar products have struggled here in recent times.  With reason; I know.  The Toyota Celica was torqueless. North Americans like torque, especially the more southern of the North Americans. Acura renamed the the Integra the RSX while relieving it of some driving verve.  Both of those vehicles waved buh-bye.  Hyundai’s Tiburon remains and will either be supplanted or supported by a rear-wheel drive Genesis coupe.
For three, without knowing the dynamic setup Volkswagen wishes to bestow upon the Scirocco, in what way will it be different from the GTI?  More hardcore; more worthy of poseur status?  Bare bones sporting or luxo-sportacious?  Without knowing how the Scirocco will differ from the GTI, it is hard to figure with which competing makes it will battle.  But, in the UK for instance, here are some potential comparison contenders.
BMW’s 1-series coupe is powered by a wider range of engines in other parts of the world.  A four-cylinder (maybe diesel?) 1-series has a status badge and worthy dynamics.  Practically, it ain’t the solution to the IKEA needs your life presents.  Then again, it’s a BMW; and that’ll sway many potential Scirocco customers. 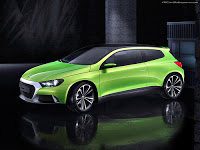 The Mazda RX-8 is another high-style sporty coupe.  Unique in many ways – rotary engine, two rear-hinged back doors – the RX-8 is still a pure driving experience and is hardly more expensive than a GTI in the United Kingdom. 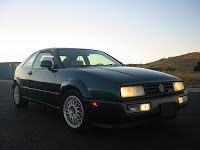 Prototype S is just a concept buzzword for Mitsubishi’s next Lancer Sportback.  Expect the Ralliart version to be a sharp driving tool with less power and less expense than the Lancer Evo X.  All-wheel drive, dual-clutch gearbox, and 240 horsepower will combine to be a hardcore alternative that the Scirocco must beat.  Or at least tame.