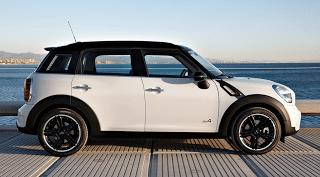 ARGUMENTS FOR & AGAINST THE 2011 MINI COUNTRYMAN – WITH GALLERY

The just-released images of Mini’s Countryman crossover/SUV cause me to come to the following realizations: the Countryman is in conflict with everything at Mini while still fitting in as solid part of the brand; the Countryman will further increase awareness of the BMW’s Mini brand; and the Countryman confuses to such an extent that it’ll be difficult for GoodCarBadCar.net to take a formal position.

Rather than herald forth the onslaught of the Mini Countrymans as wondrous, instead of decrying the reign of SUVs in the North American Marketplace, The Good Car Guy will use this space to illustrate opposing views. Assuming the basis for the Mini Cooper and Mini Cooper S is formed by style, dynamics, efficiency, and marketing, an argument by both sides – for and against that which is the 2011 Mini Countryman – will be made below. Check out 53 pictures of the new Mini Countryman in the Gallery below. And don’t forget, the basic Mini Cooper has made appearances in The Good 12, The Good 12 v2.0, and The Good 12 v3.0.

STYLE FOR
Unlike Mini’s third bodystyle, the Clubman, the Countryman appears as though it was done right from the get-go. The front end is blunt, as it should be. Using black wheels speaks to the Mini’s mission, not just as a frivolous showpiece but as a vehicle in which to get down and dirty. Most importantly, the Mini Countryman looks like a Mini. And a proper tailgate insures nobody will be criticizing Mini for thinking outside of the door box.
STYLE AGAINST
Significant problems arise for brands which are so indellibly linked to one specific product. Park a Mini Countryman beside an original Issigonis-designed Mini and the sport-ute Mini will all but make the BMC Mini disappear. That’s not progress, it’s regression. Sure, it looks like a Mini. Who can’t multiply dimensions by 1.5 and add two doors? And what would’ve been wrong with going a little Marlboro Man inside with some additional ruggedness?
Just How Big Is The Mini Countryman?
DYNAMICS FOR
If BMW has proven anything with the Mini brand it’s the German’s ability to make a handling superstar out of any configuration. Typically, BMW engineers are working on rear-wheel drive inline-six cylinder cars like the Good 12-winning BMW 3-Series. Every Mini so far has been a front-wheel drive four-cylinder hatchback with a completely different weight bias. Yet BMW makes it work. So the ride height’s jacked up and there’s additional weight from the larger packaging and available all-wheel drive. Whoopee. It’ll all come together.
DYNAMICS AGAINST
Since the release of the very first BMW-designed Mini Cooper every subsequent Mini has been less of a “handling superstar”. Newer versions are enlarged, and then enlarged again as the Clubman, and the depth of connection between man and machine is wilting away. Indeed, a basic Mini Cooper is still a spectacular steer compared with its rivals; but that’s not to deny BMW’s softening of Mini’s carriage. With increased weight and wheelbase, I fear the Countryman will be to Mini what the Cayenne is to Porsche: Pretty good for an SUV; not so good for a Porsche.
EFFICIENCY FOR
Before you start arguing about your mother’s great uncle’s Austin Mini in Manchester that was sooo small but had tons of space inside and rarely sipped a gallon of fuel, take into account crash test standards. Okay, now that you’re back in 2010 you realize why Minis have grown. Behind the Mini Countryman’s rear seats is 12.2 cubic feet of cargo space. Fold those rear seats and what have you? 41 cubic feet of capacity for junk in the trunk. That’s 6.5 and 17 cubic feet more than can be had in a regular Mini Cooper. So the Countryman will carry plenty and cost you more at the pump? That’s called a trade-off.
EFFICIENCY AGAINST
If the Mini Countryman has anything in its quiver in a fight against a Cooper or Clubman it’s the ability to slot passengers in the back and carry a bit of a load. But…. ummm, perhaps BMW forgot. It’s supposed to be Mini in more ways than one. Surely the Countryman’s load-bearing capability, all-wheel drive equipment, and concomitant accumulations in the weight of brakes, wheels, and suspension fitment will have a devestating impact on the Mini’s fuel efficiency. Don’t ignore the fact that America’s best-selling SUV ain’t gargauntuan itself, yet the Countryman subtracts 23.5 and 31.9 from what’s on offer in the back of that Honda CR-V.
MARKETING FOR
Mini is smart enough to play up the increase in capability compared with the Cooper, Convertible, and Clubman while also drawing attention to the contrast with traditional SUVs and their gas-guzzling ways. Every Mini purchase goes back to one root cause: design. So expect to see spots relating to the interior’s Center Rail as well as lifestyle advertising emphasizing kiteboarding and urban hipness. The side-effects for the Mini Cooper, Mini Convertible, and Mini Clubman will be hugely advantageous.
MARKETING AGAINST
Mini’s annoying press release calls the Countryman a “genuine Crossover”. Yes, with an uppercase C. The link with BMW is obvious when the term “Sports Activity Vehicle” crops up in the second half of the second sentence. Give me a break. It won’t take a genius or an automotive enthusiast to realize the contradiction in the brand’s name – MINI – and the vehicle’s classification as either a very large hatchback or a small SUV. Three words, friends. Rollover. Issigonis. Grave.