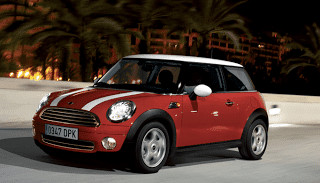 Owning a Mini Cooper is all about the possession of cake and the consuming thereof. Although priced for Dairy Queen’s freezer, this cake takes ingredients from one of the best cake-makers in the world. The pastry chefs hail from the land of the Ultimate Driving Machine. The basic Mini – like the original – is meant to be eaten, I mean…. driven – with gusto.

Moderate levels of horsepower and torque work well when weight is kept in check. A turbocharged Cooper S, though plenty entertaining when driven aggressively, isn’t necessary in order to have fun in daily circumstances. Meanwhile the Clubman is a mite fugly and the Convertible a touch bloated. In other words, don’t be put off by the Mini Cooper’s diminutive stature or its less stimulating straight-line pull. This is a car built for corners.
Don’t bother passing judgment on the price per square foot ratio, either. Standard features and dynamics make up for a lack of rear seat space and the nearly absent aperture astern. Besides, the Mini wouldn’t be a Mini if it weren’t mini. Even a hint of obesity would have ruinous effects on the Mini Cooper’s steering and its ability to soak up bumps. So a small cake it is, but a very pretty and tasty cake indeed. Bon appetit.
—–
Engines: 118 horsepower; 114 lb-ft of torque from a 1.6L inline-four
Base USD Price: $18,800
City Mileage: 25-28 mpg
Sales Stats: After the first eleven months of ’09 had passed by, BMW announced that Mini had sold 198,163 variations of the One, D, Cooper, and S worldwide. Compared with global leaders like the Ford F-Series, Toyota Corolla, Volkswagen Golf, and Ford Focus…. that’s nothing. But for a profit haven like Mini, even a decrease in November still means Mini sales in America topped 2,500.
CLICK HERE FOR THE GOOD 12 v3.0 PART VI
CLICK HERE FOR THE GOOD 12 v3.0 PART VIII