Malibu is represented by two very contrasting stories lately; both of which are hot. Unfortunately so in one case. Wildfires in SoCal have destroyed homes, wreaked havoc upon families, and generated unwanted attention for a region filled with celebs.

Malibu, the word, is making news for another reason, however. General Motors, specifically Chevrolet reps, are talking up Malibu sales. Over 3000 sales in the States. Hmm, 3000? Camry’s and Accord’s are sold by multiple hundreds of thousands each year. But Chevrolet built this news due to the restricted availability and low expectations – in the time span during which Chevy dealers sold 3000; GM had expected to sell just 500.

Opinions are starting to surface regarding the Malibu as a driving device, rather than as a commercial or heavy-duty marketing experience. Car&Driver has named the Malibu as one of their 10Best, a yearly feature where new cars must compete against winners from the past. (More to come on that story soon.) MotorTrend also named their Car of the Year this month, and General Motors laid claim to that title, too.

But it wasn’t a Chevrolet. Cadillac’s excellent CTS (amazing everything… bar the cheap metallic panelling inside) beat out 17 other vehicles, including the Audi A5, Mercedes-Benz C-class, Volvo C30, Mitsubishi Lancer and two new Scions. Oh, and the new Honda Accord.

Speaking of that Accord and of that Malibu, M/T editor-at-large Arthur St. Antoine wrote thus: “Technical director Frank Markus and I each did brisk back-to-back runs with the Accord EX and Malibu LTZ on the COTY test-track’s handling course. Post-drive, engines off, I looked at Frank. He looked at me. “I think the Malibu handles better,” I said. “Me, too,” said Frank. We also agreed that the Malibu was more fun…. Our test gear also preferred the Malibu: Compared with the Accord, it’s quicker, stops better, and wins every objective handling test…. Is the new Malibu not just better than the vaunted Accord on a car-for-the-money basis but actually better in many ways than the Accord – period? The answer is an unqualified “yes.” 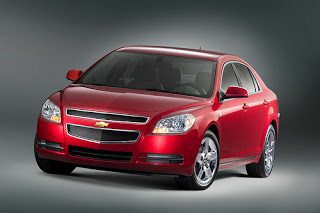 You’ve gotta respect the words, whether you agree with them or not. When The Good Car Guy names his “Good Cars for 2008” – the twelve vehicles The Good Car Nation should be seen driving – the Accord has a terrific chance of making the list, and the Malibu will have to truly fight for a place. Handling and striking looks are just two characteristics a car can make use of when fighting for the recommendations of the experts.

Nonetheless, Chevrolet is making unexpectedly large and deep inroads with the Malibu. With high praise comes unembarrassed buyers. If people feel free to buy a Chevrolet on its goodness rather than just its price; well, Toyota and Honda should up their game.