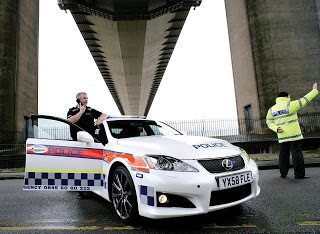 Over time, automobile manufacturers have acquired to main theories when it comes to selling vehicles. First, there’s the “poach”. Hyundai loves to sell a Sonata to a former Toyota Camry buyer, for instance. Then there’s the “up-sell”. Grab a young customer who, for example, is interested in a smart fortwo. Over time, said customer upgrades to a B-Class, then a C-Class, and by the time he or she reaches retirement age, an SL63 AMG is in their grasp.

Check Out All Police-Related Posts @ GoodCarBadCar.net
The police in Humberside, England have given Lexus a strange helping of both the poach and the up-sell. Switching from their fleet of Subaru Imprezas to Lexus sedans seems odd enough. Add to that the fact that Humberside’s choosers anted up for the Lexus IS-F, the fastest Lexus on the road. This is Toyota’s BMW M3 equivalent; a V8-powered small 4-door with 416 horsepower and an 8-speed automatic.
Humberside took this decision seriously… allegedly. The vehicle had to be capable of carrying an extra £30,000 worth of gear. ” The Lexus was tested during a 12 month period along with similar vehicles and proved itself to be ideally suited in providing a dynamically safe high performance chassis,” Sergeant Mike Peck said.
In the United States the Lexus IS-F costs $56,760. A common U.S. police car like the Dodge Charger R/T has a base MSRP of $32,910. Lexus charges £53,381 for the IS-F in the UK.