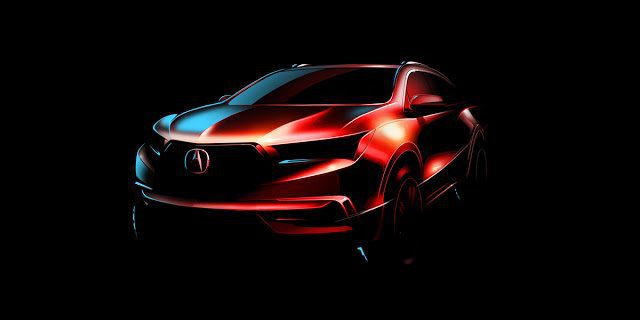 ACURA
The third-generation Acura MDX isn’t old by any means, but for model year 2017, Acura is thoroughly refreshing America’s most popular three-row premium brand crossover. Set for an introduction at the New York International Auto Show in March, the revamped MDX won’t be all-new, but there’ll be new styling and a new powertrain. Expect a nine-speed automatic. – The Globe & Mail

medianet_width=’468′; medianet_height= ’60’; medianet_crid=’481536334′;
TWO-TIER AMG
First AMG was a separate entity. Then Mercedes-Benz brought its tuner in house. Then Mercedes-Benz released hot AMG versions of almost every vehicle in its lineup. Then there were AMG sport packages. Then there were lesser hot versions: AMG Sports. Now, there are simply two tiers of AMG products, and they all lose the Benz portion of their names. The Mercedes-AMG C43 is the latest lower-tier AMG model, a step down from the Mercedes-AMG C63, but still a cut above the typical Mercedes-Benz C400. – Top Gear

SPEAKING OF AMG…
Is it not a little bit crazy that the Mercedes-Benz G-Class is still on sale, that it still commands outrageous prices, that it’s still available in an AMG variant with 563 horsepower and 561 lb-ft of torque at just 1750 rpm, that this 6000-lb military grade SUV accelerates to 60 mph in less than five seconds? – Car & Driver

QUATTRO
We told you earlier this week that Lamborghini was replacing Stephan Winkelmann with former Ferrari F1 boss Stefano Domenicali. Now we know where Winkelmann is heading. He’ll take over as the boss at Quattro GmbH, which is to Audi what AMG is to Mercedes-Benz. Volkswagen-owned Audi, you’ll recall, owns Lamborghini. – Automobile

WATCH
In January, Canadian sales of the new Audi Q7 jumped 275% to 334 units, enough to make the Q7 more popular than the GMC Acadia, Cadillac SRX, Jeep Renegade, and a large number of SUVs/crossovers that routinely outsell the Audi. In the U.S., Q7 sales jumped 165% to 2336 January sales. Does the Q7 merit all this attention? Here’s Alex Dykes’ video review of the 2017 Q7 3.0T, the most thorough and detailed Q7 review on YouTube.