The Lexus RC F strikes me as a car that will be quickly forgotten when Lexus either decides to or is forced to pull the plug.

It’s been called a flop by some of the biggest names in the industry and is often cited as too heavy to compete with comparable models from BMW and Mercedes-Benz. It’ll fade quickly once Lexus no longer puts out special editions.

Despite this, it’s one of the most enjoyable high-powered coupes on sale today.

While the Lexus RC F might not be as hard-edged as the BMW M4 Coupe or the Mercedes-Benz AMG C 63 Coupe, it has a style all its own.

If you want a luxurious two-door that can thrill you, and don’t want to pay the prices that come with German cars, the RC F delivers.

It’s pitted up against the BMW and Merc at its peril. Those cars are faster around a racetrack. That seems to be the main thing people point to.

It is a little outpaced by the competition, especially when you start to dig into it. That’s not all that matters, though, and it doesn’t make the RC F a bad choice. 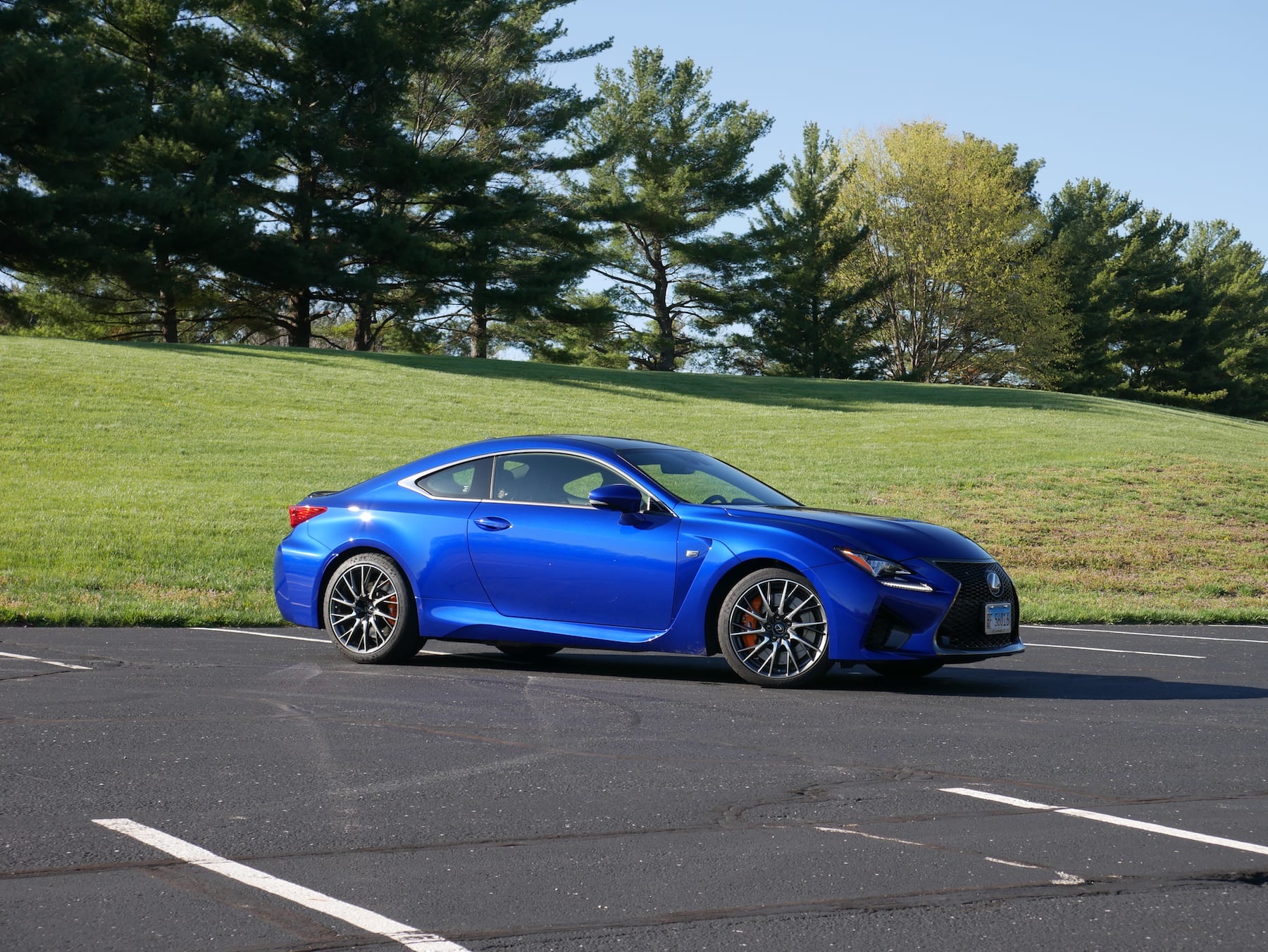 The Lexus RC F is a luxurious high-powered sporty coupe. Its the high-performance variant of the Lexus RC, which is a considerably less interesting but still good car.

The RC’s body was reworked for the RC F to improve aerodynamics and help cool the big engine. There’s an active wing on the trunk lid and a considerable amount of carbon fiber throughout the car.

This is a true high-performance car, though some people find it lacking the extra oomph to really put it up there with the segment bests. It fills a role in the Lexus lineup under the LC 500 grand touring machine. The RC F isn’t a slam dunk, but it is a tough competitor to the segment leaders. 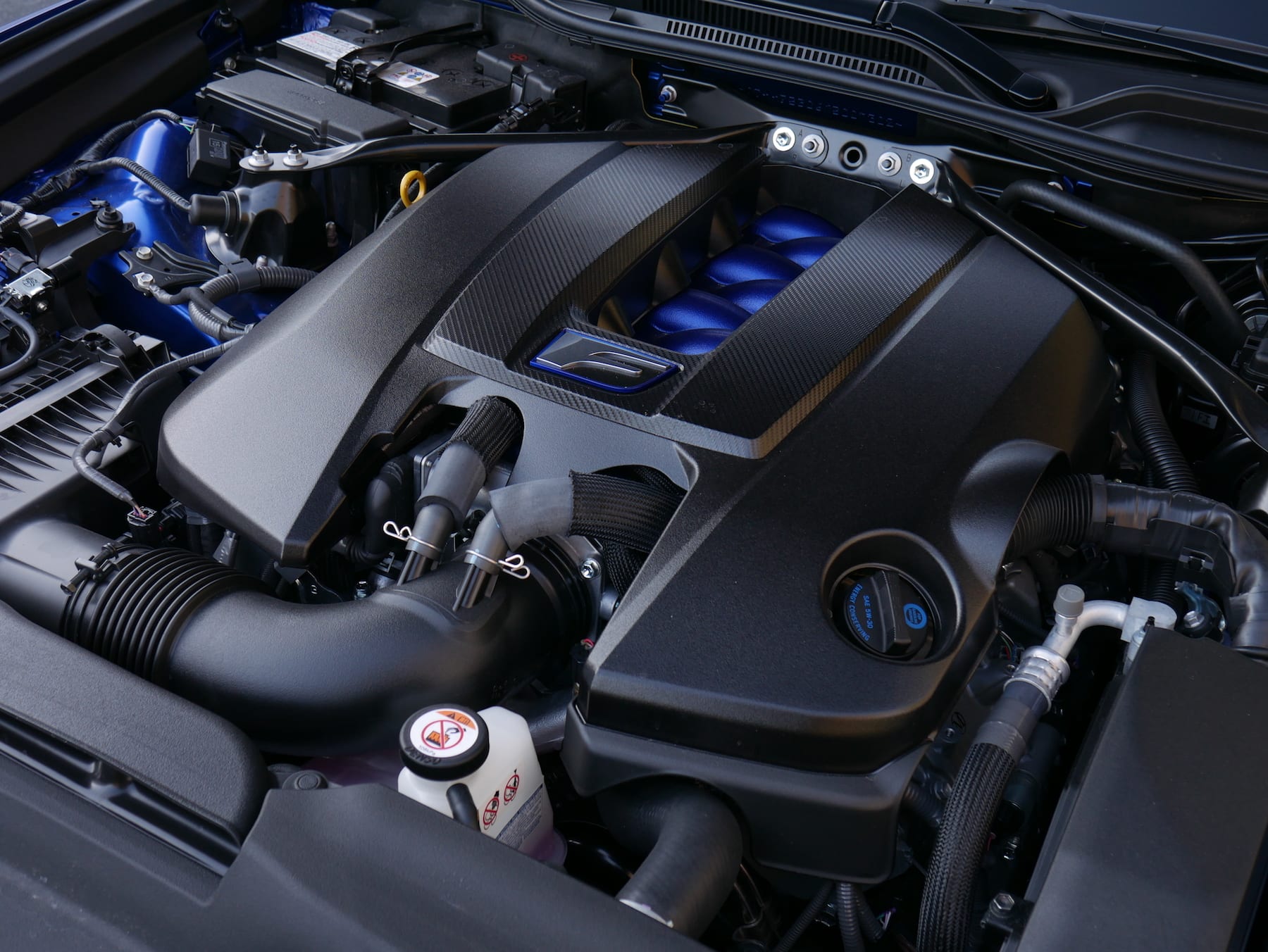 To make the RC F, Lexus stuffed a hearty 5.0-liter V8 engine under the hood. The fact that it’s a naturally aspirated engine makes it special in an age when turbocharging and supercharging are everywhere.

The engine makes 467 hp and 389 lb-ft of torque, which is filtered through an eight-speed automatic transmission (with paddle shifters) to the rear wheels. That’s more than enough to move this nearly 4,000-pound car down the road with authority.

The model can do 0 to 60 mph in about 4.5 seconds and has a top speed of 168 mph, according to Lexus. It feels excessively fast on the road, and there are few places you can really use all the power.

An Exterior That Ratchets Things Up On the outside, the Lexus RC F’s overall shape doesn’t look wildly different than the RC on which it’s based. However, there are multiple tells that this car is the high-performance variant.

The front end and hood let you know right away. There are bigger vents in the bodywork and hood that hint at the large engine underneath. Towards the end of the front fenders are massive vents that help with airflow and cooling, too. This thing is ready to gobble up as much air as possible on its way to three-digit speeds.

The roof of the car is made of carbon fiber, and so are several other parts of the car, like the retractable rear wing that fits nicely into the trunk lid when not in use. These all stand out and let you know that this isn’t your run-of-the-mill Lexus.

Pair all that with the beautiful 19-inch, hand-polished BBS wheels that were on my tester as an option, and you have a car that looks like it’s ready to rip your face off.

A Well-Built, But Busy Interior 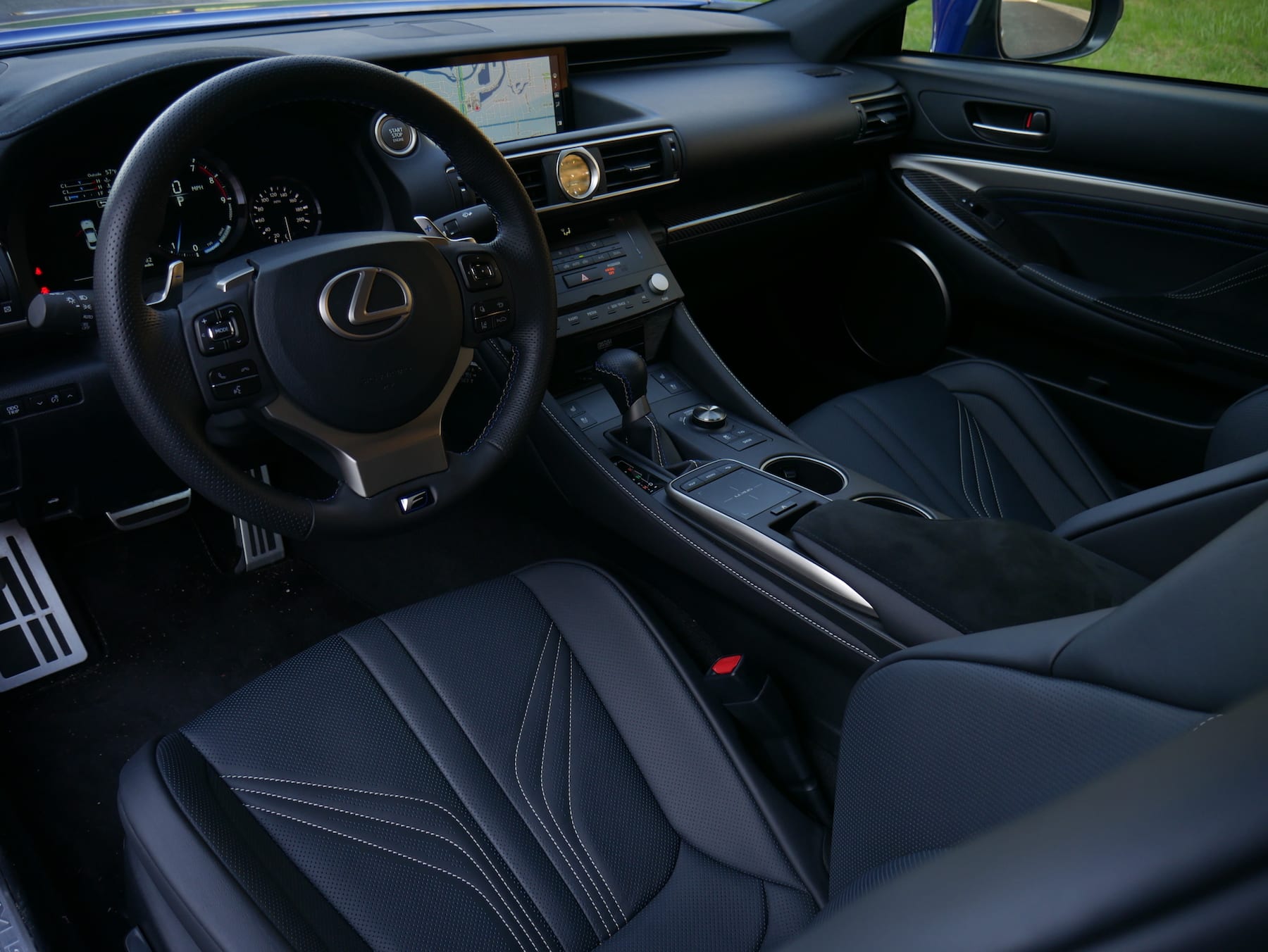 Lexus doesn’t make the most attractive interiors. The company’s cars have high-quality interior materials, and the fit and finish and build quality are some of the best in the industry, but there are always many different interior materials, several different layers to the dash, and a busy design overall.

The RC F is no different. There are at least three different types of plastics, some soft-touch rubber material, soft and smooth leather, Alcantara, contrast stitching, and carbon fiber trim. There’s a lot going on.

With that said, Lexus does a surprising job of making it all look good together. The company is more or less successful in the RC F’s interior.

It’s important to note that the interior feels wonderful, too. The leather is soft, smooth, and thick, the steering wheel is thick and wrapped in more lovely leather, and even the parts of the dash, center console, and doors that have plastic on them feel sturdy.

I would not be surprised to learn that the RC F holds up better over long periods of time than its immediate competition. 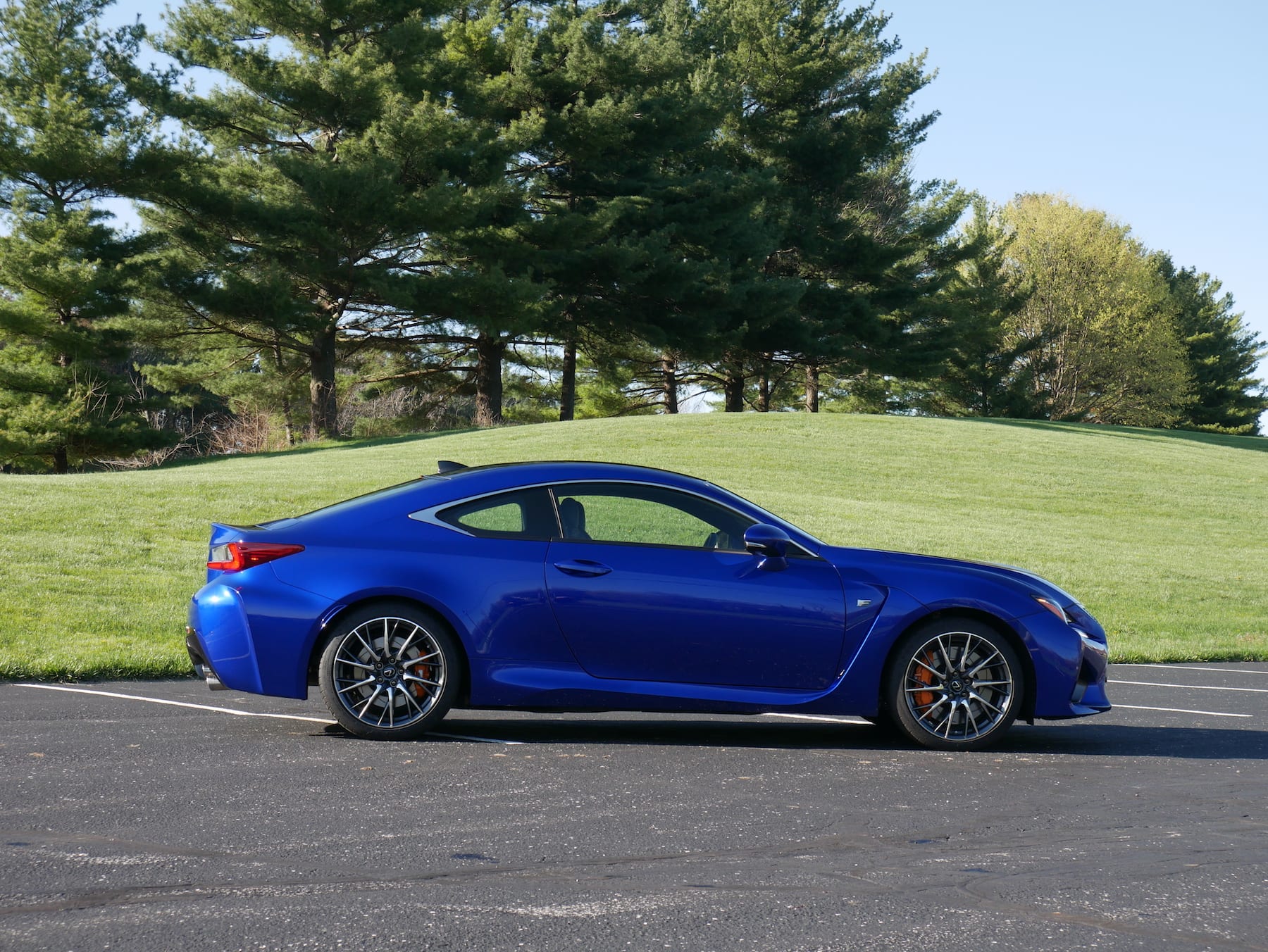 The Lexus RC F isn’t really a super small car. It’s a 2+2 coupe that measures 185.4 inches in length and 72.6 inches in width. That’s bigger than some small sedans. With that said, the RC F is on par for the segment.

The BMW M4 Coupe has dimensions that are within a half inch or so of the RC F. The Mercedes-Benz AMG C 63 Coupe is basically the same as far as exterior size, too.

The BMW M4 Coupe does a little better with the rear seats offering 33.7 inches of rear seat legroom. It only offers 42.2 inches of legroom in the front, however, that’s still a generous amount.

When you turn to the trunk space, the winner is the BMW M4, with 11 cubic feet of space in the trunk. The Mercedes-Benz AMG C 63 Coupe manages 10.5, and the Lexus RC F comes up short with a 10.1 cubic foot trunk.

With that said, I never had trouble fitting what I needed in there. The trunk of the RC F did a fine job swallowing up groceries or bags for a quick weekend trip. The loss of a single cubic foot of cargo space doesn’t matter much. 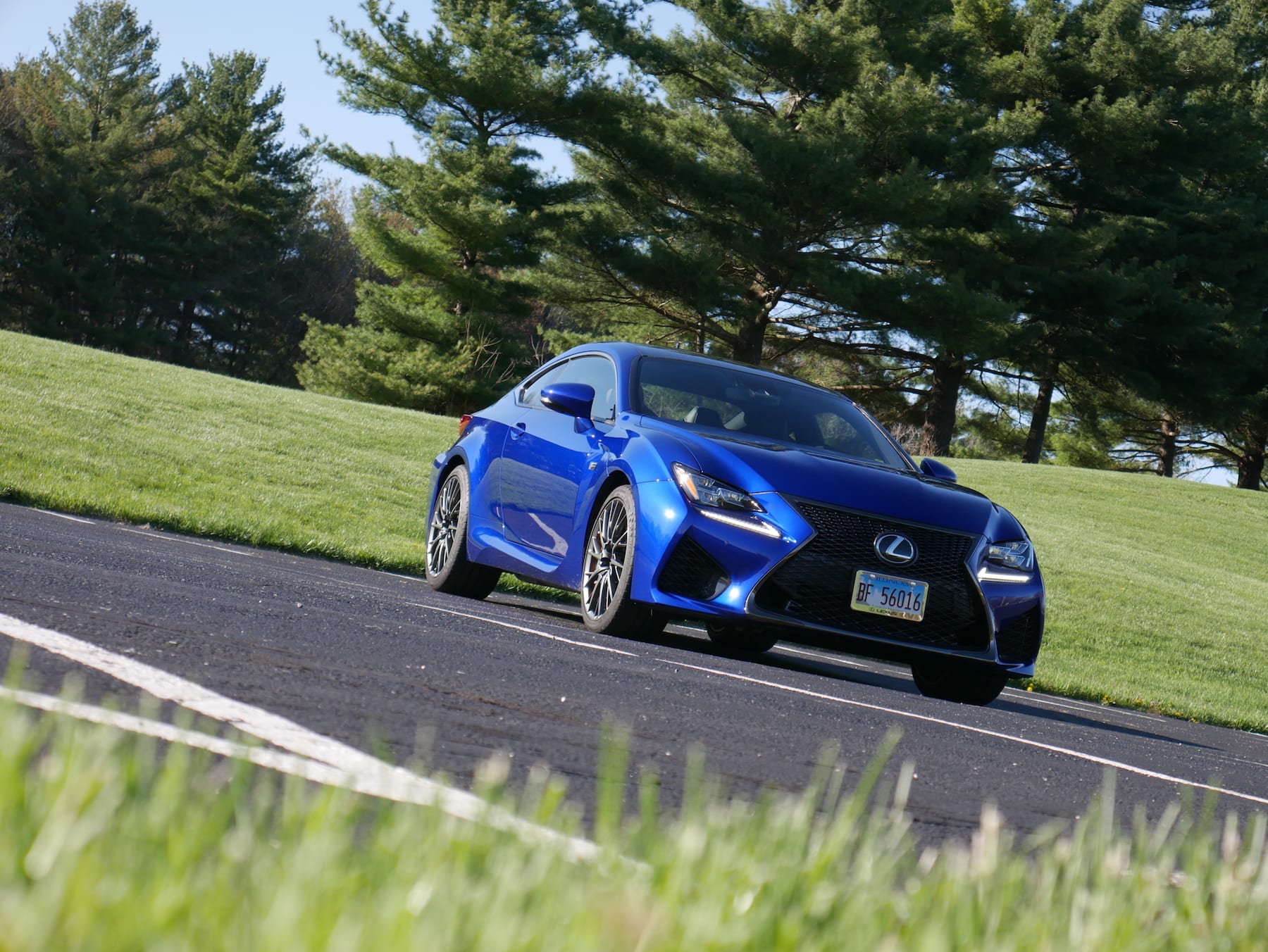 The 2019 Lexus RC F is a good high-performance coupe, but when dealing in products suited for a specific niche, details matter. The BMW M4 and AMG C 63 do go around a track quicker. If that’s important to you, then you should give those cars a look. They’re also just a little bit more spacious inside and in the cargo department.

However, the RC F offers a strong engine, good handling, and precise steering. I found the ride is also a little smoother than in its German competitors. It’s built sturdily and feels like it will last a long time. Lexus has a reputation for this being true. It will cost less to buy and less to maintain than its German competition, too.

So, it really depends on what you want. If you want a true high performer for the track, the Germans are your best bet. If you want a Japanese high-performance luxury coupe that’s comfortable day-to-day and can also do a good job around a racetrack, then the RC F is a smart choice.

I’d argue that the RC F is a better daily car than the M4 and AMG C 63. Those two cars are a little too hardcore. With that said, my quibbles with the car make me seriously consider the alternatives. The first was the lack of lumbar adjustment on the front passenger seat. 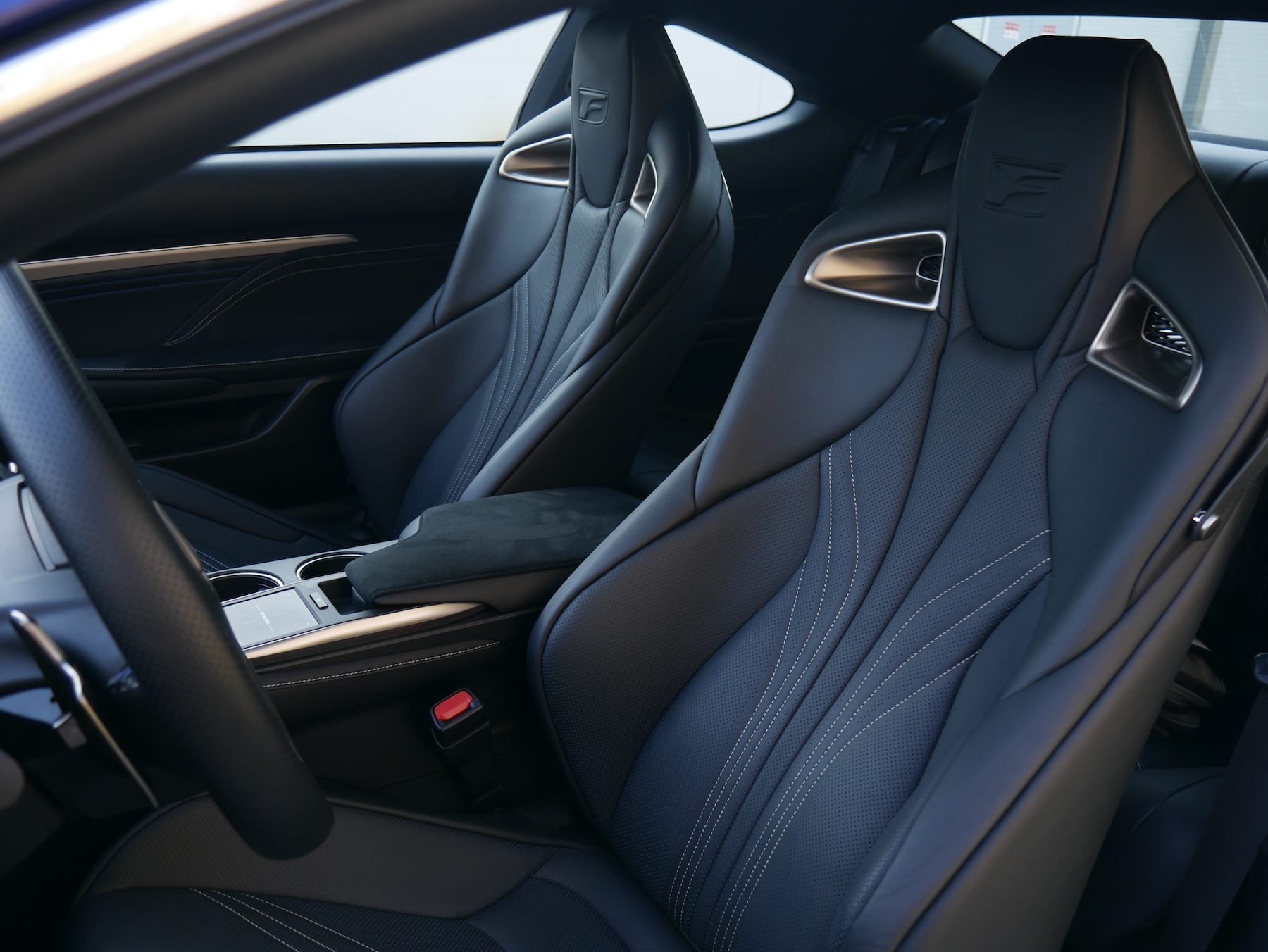 The sport seats really cup you in. Frequently my passenger (my wife), let me know that her lower back needed more support. In a car costing as much as the RC F, both the front passenger and the driver deserve adjustable lumbar support. The driver’s seat lumbar adjustment is excellent, so Lexus just needs to add it to the other side.

The second issue was the infotainment system. I love that Lexus is finally getting with the times and offering people Apple CarPlay and Amazon Alexa (no Android Auto yet) on top of many other features like navigation, Bluetooth connectivity, Wi-Fi, and all the things the Enform system had before this year, but I still think the touchpad makes these features hard to use. 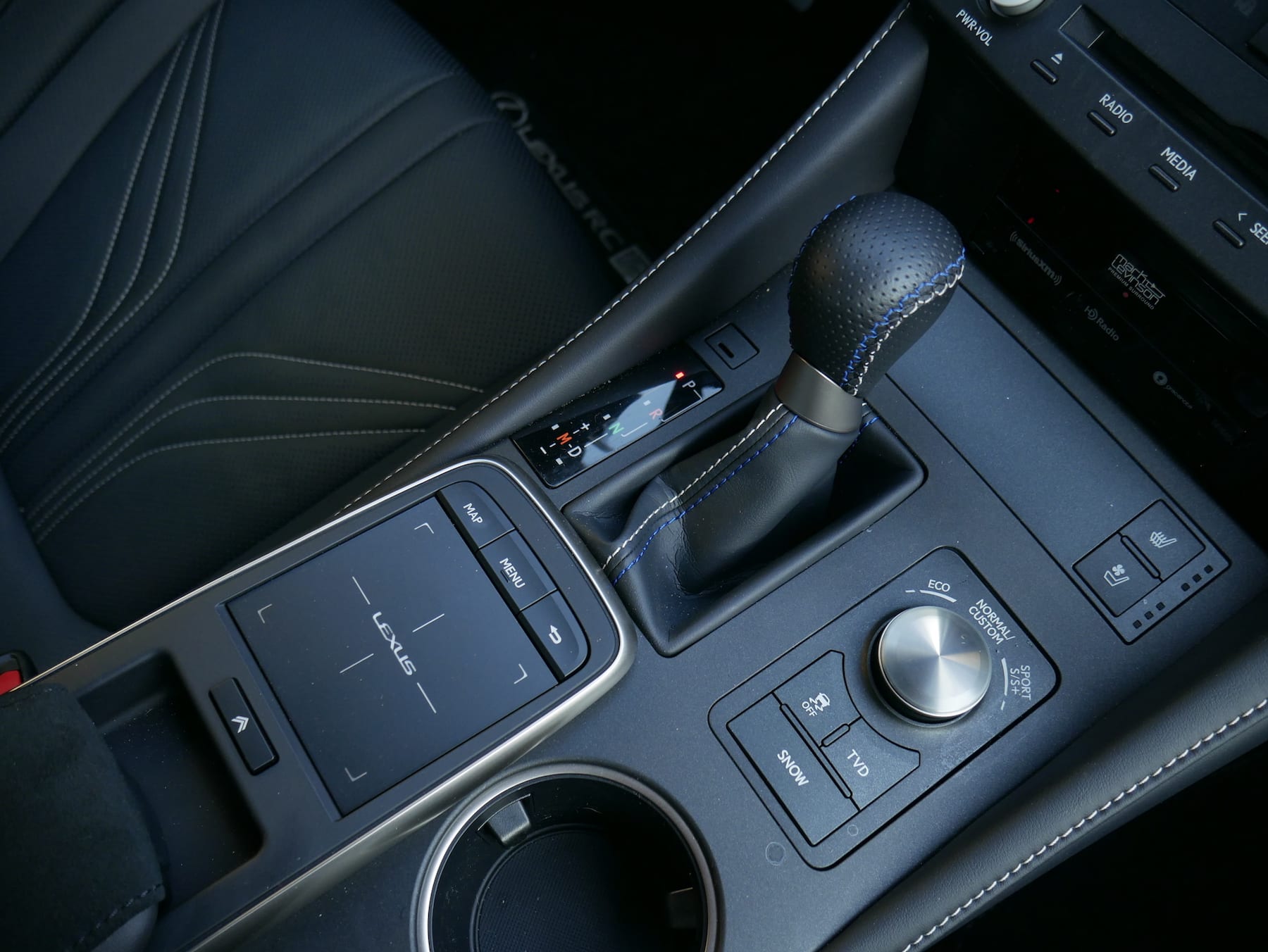 I’ve discussed my dislike for the Lexus remote touchpad before. It’s a crappy way of handling an infotainment system. You do get used to it after a while, but it still takes too much of your attention from the road. This is a problem in any car, but it’s a serious one in a fast car like the RC F.

Despite this, I found myself falling for the RC F. There’s an intoxicating amount of power under your right foot at all times. The Brembo-sourced ventilated disc brakes stop this heavy car with seat belt-choking ease, and there’s nothing like seeing an active wing pop up in your rear view when you really get after it.

To sum it up the RC F is fast, looks great, is well-built, and most of all, fun. It feels solid and sure of itself, and that’s confidence inspiring. I loved driving it, and it’s not the car that would get old anytime soon.

The naturally aspirated V8 and the non-dual clutch automatic transmission give it a bit more of a soulful feeling than some other cars with more advanced performance technology.

If you’re not worried about having the absolute best track car, you’re bound to find the RC F highly satisfying. It’s not the best car in the segment, but it’s still darn good. 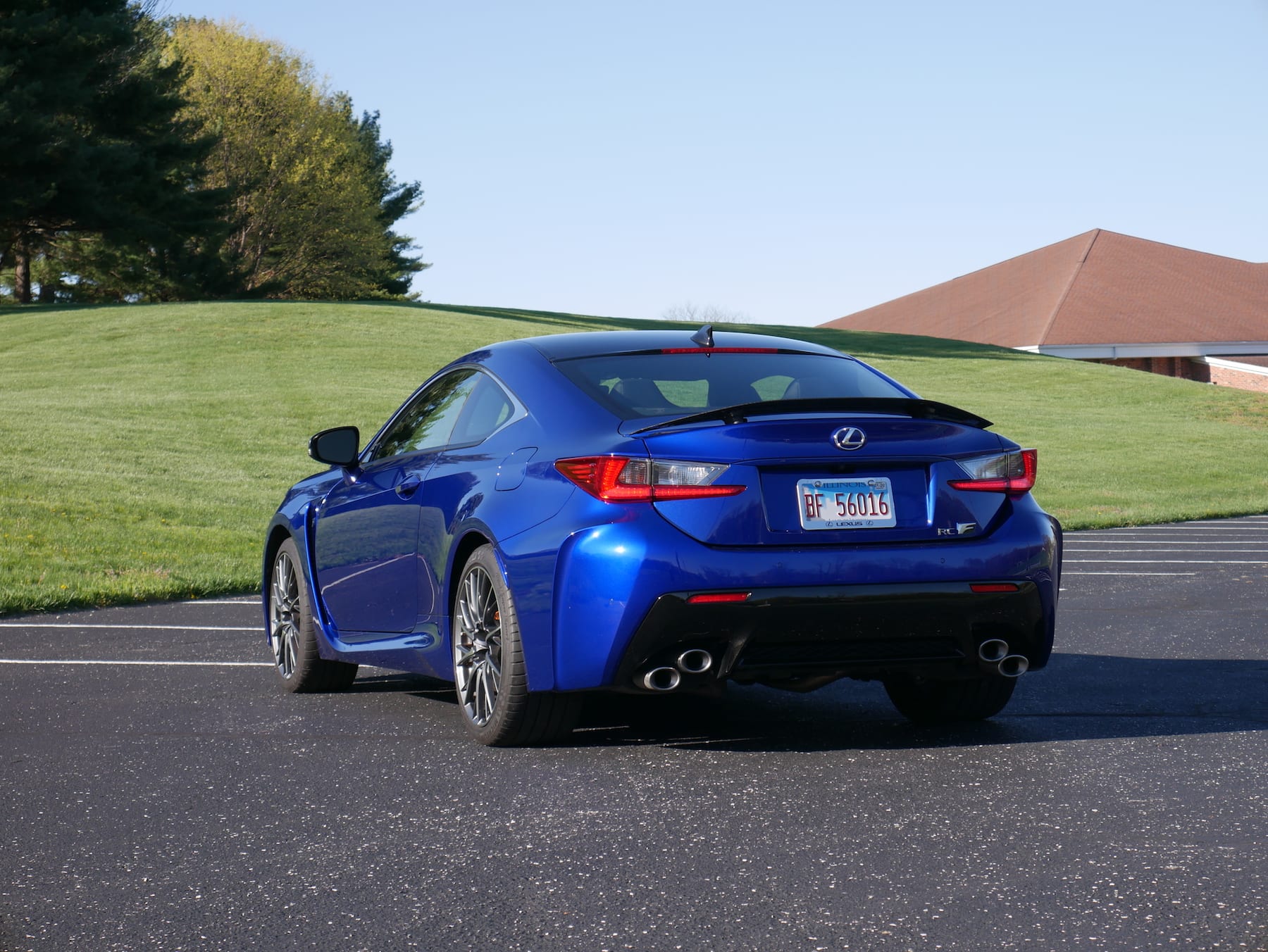 For me, this is where it gets interesting. There are things about the RC F that would make me lean towards the BMW or the Merc. However, when I look at the price, I slide back into RC F’s camp.

The car simply offers a lot for the money. The base price tag for the Lexus RC F is $64,750. My tester came with a slew of options and was priced at $82,044. That’s a lot of money, but the BMW and Mercedes cost more. 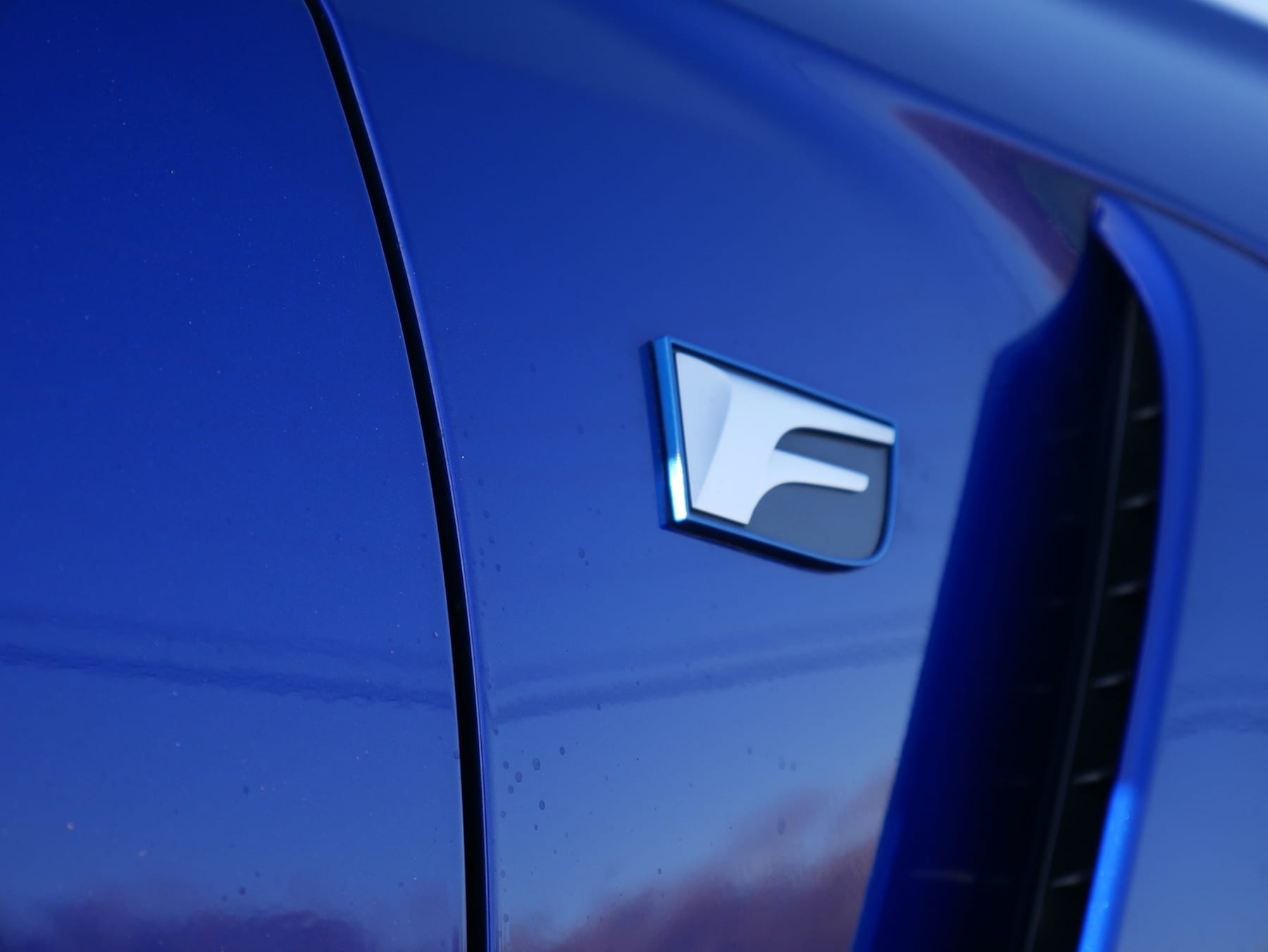 The Mercedes-Benz AMG C 63 Coupe starts at $68,750. Again, if you option-out the Mercedes in a similar manner as my Lexus tester, you can end up with a car over $90,000 depending on the options you choose. A performance-focused buyer could get most of the performance upgrades and forget about some of the entertainment and convenience ones and manage a high $70,000 or low $80,000 car, exactly like with the BMW.

What I’m saying is that for your money, you get more from Lexus. Does this mean the RC F is a better car? Not necessarily, it just means it’s more affordable. The Lexus offers nearly the same levels of performance to its competition for less money. It might not be quite as good, but it definitely justifies its price. 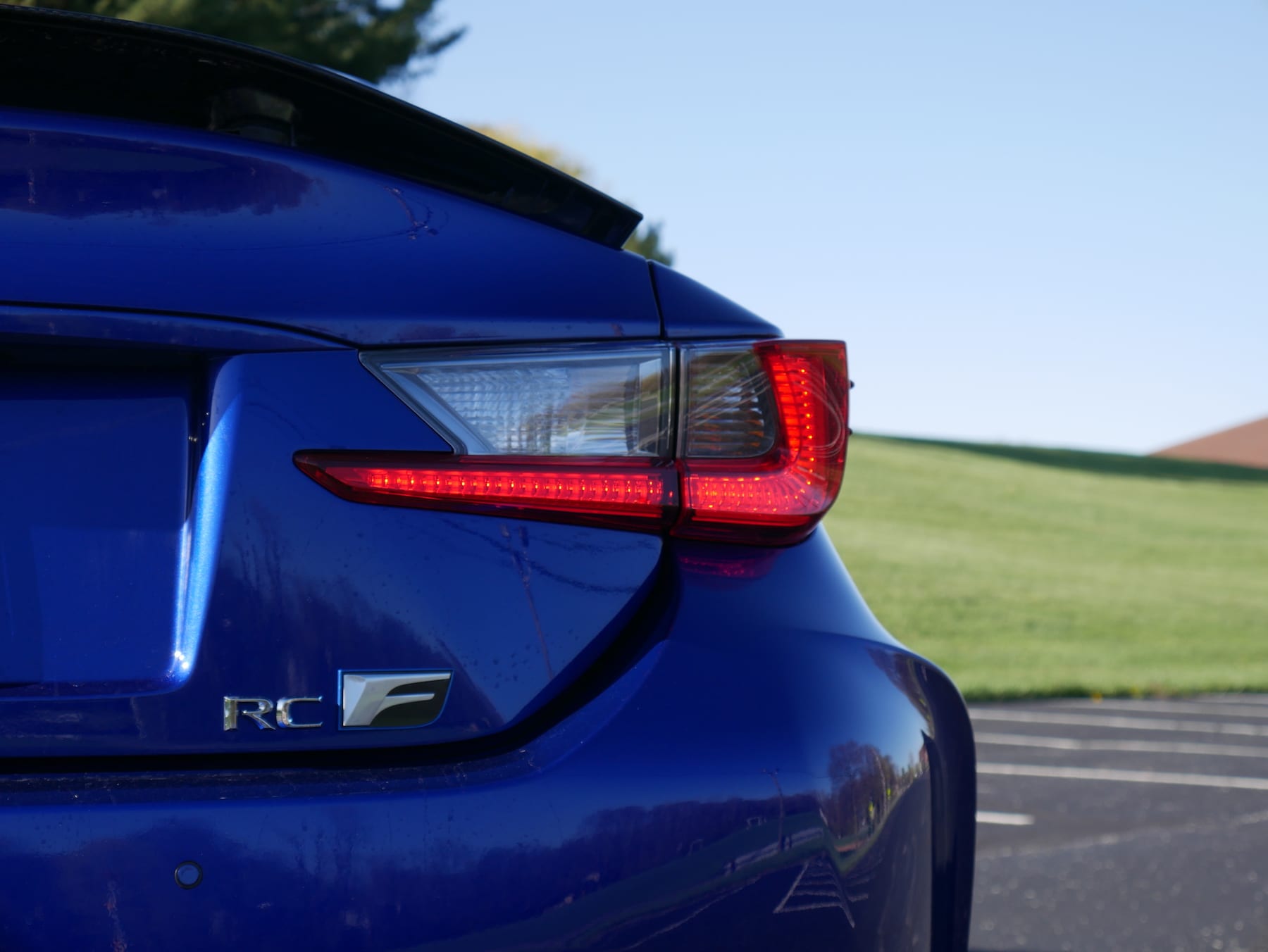 As you can probably tell, I struggle with a concrete verdict for the RC F. It’s a wonderfully luxurious, high-powered coupe that I thoroughly enjoyed. However, it doesn’t beat the competition in many areas.

The car is an alluring alternative if you’re dissatisfied with the BMW M4 Coupe or the Mercedes-Benz AMG C 63 Coupe, but it’s not better. The Lexus offers an experience nearly as good and definitely different, but the car is far from perfect.

This is more a testament to BMW and Mercedes-Bens than anything. Those companies built cars that are simply too good to be dethroned even by a vehicle as powerful and luxurious as the RC F.

Lexus upped the ante for the 2020 RC F with a refresh and a new Track Edition. It’s more powerful and lighter than before, but it will likely still suffer from many of the same pitfalls.

I hesitate to say it will be able to beat the Germans at their game, but I’m sure it narrows the distance even further. As for the 2019 model, it’s not quite there.