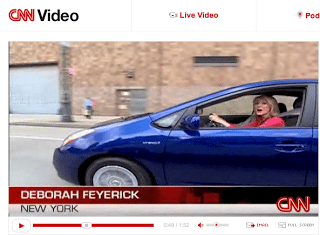 CNN’s Deb Feyerick is covering the story of decreasing ‘green’ car availability. Joe Abutel is a Manhattan dude that downsized from a Hummer to a Toyota Prius. (No options in between?) Clearly Joe was pretty serious about the environmental impact of the car (something that has been placed in doubt before, remember) and not just the savings at the pump.

How do ya figure that? Well, Abutel spent nearly $24,000 on the used and slightly damaged hybrid Toyota after spending some $2,400 on fuel last month in his Hummer. The Ford dealer where the Prius had been accepted on trade – indicating somebody wanted something better – had started eBay bidding at $15,000. Not only that, but Joe Abutel was contacted by three other bidders who figured he’d continue the sales chain at slightly above $24,000.
My question: Despite the increasingly hard-to-find car that the Prius is, how does Abutel justify paying more for a used Prius than the upper-level Touring model is when new? Moreover, if downsizing from a Hummer to a more fuel efficient car is necessary – which it probably is – why spend an inordinate amount of cash on the car side of the equation? Put another way – wouldn’t 10,000 fewer dollars spent on the vehicle be a handy gas cash pouch? Ya know, the Good 12-winning Honda Fit, for example.
If efficiency is the genuine objective, a $24,000 Prius isn’t the answer to your Hummer problem. Check out the CNN.com video here.