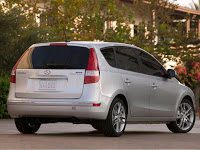 HYUNDAI NEWS BY THE NUMBERS

17 – Percentage of market share Hyundai held in India last year, down 1.2 points from 2006
2.3 – Drop in percentage points of Hyundai’s market share in China
127,000 – Vehicles exported by Hyundai from India in 2007
58,000 – Sales drop, in units, that Hyundai faced in China in 2007, while the market as a whole saw a jump in sales of 22%
110 – Litres of compressed hydrogen held at 10,000psi in Hyundai’s i-Blue concept which debuted at the Chicago Auto Show
600 – Distance, in kilometres, Hyundai believes the i-Blue, with its 136 horsepower, could travel when properly fuelled, although it’s unlikely to do so at its top speed of 160km/h
249 – Horsepower available in the slightly redone V6 Sonata, up 15 horsepower from the previous 3.3L V6

20 – Percentage of buyers whom Hyundai believes will opt for the V8 version of the Genesis, a luxury car that Hyundai will de-badge by the time it hits dealers
6269 – January sales drop for Hyundai in the USA, compared with January of 2007
504 – January sales increase for Hyundai’s smallest North American-market vehicle, the Accent, compared with January of 2007