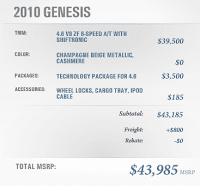 4.6L V8s with six-speed automatics weren’t commonly known as Hyundai’s domain until the Genesis came along a couple years ago. Conservatively handsome with abundant luxury and prototypical Korean pricing, the Hyundai Genesis shot to the forefront of the automotive media, whether buyers could wrap their head around a Lexus competitor from Hyundai or not. Thousands of consumers have wrapped themselves in the coddling embrace of a Hyundai Genesis, and kudos also came in the form of two consecutive Good 12 victories and placement as the North American Car Of The Year.

CHECK OUT THE FORD FUSION HYBRID GOOD 12 GONE BAD
So don’t ruin it… please. Painting the car Champagne Beige gets you off on the wrong foot. Selected Cashmere for the interior – not actual cashmere, just the name affixed to the colouring – means you’re two feet in the wrong direction. You’ve taken a car that isn’t as exciting as a $40,000 BMW 3-Series and made it…. a bit blaa. Upgrading the car with a Tech package for $3,500 isn’t a bad idea, but it’s a questionable choice if the Hyundai attracted you because of its loaded nature and sub-$40K price. The Tech pack is full of goodies: 17 speaker stereo, navigation, smart cruise, rearview camera, and Bluetooth among other things. However, dangerous territory is approaching. $185 in accessories puts you within spitting distance of $44,000.
Great value? For sure, son. Just take into account the fact that tasty machinery is thick and heavy on the ground in the mid-$40s and your car is beige-on-beige. 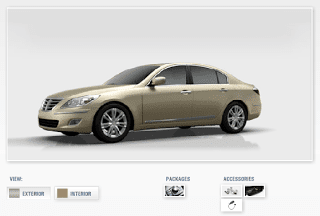