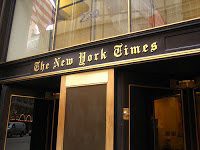 Yes, GM communications folk read everything, from GoodCarBadCar to the New York Times. Or maybe the other way around. You’d be interested to know that GM grows rather defensive when they read attacks on their motivation – far moreso than they would if I criticize the cheapness of the Saturn Sky’s hood latches. You’d be more interested to know that GM is capable of defending their overtaker, Toyota. Tom Friedman has made himself a automaker-hating reputation, and yesterday on General Motors FYI blog, Tom Wilkinson shot back. Here’s a full and direct quotation:

Beware the Ideas of Friedman

By Tom Wilkinson
GM News Relations Tom Friedman’s shotgun blast at Toyota in the October 3 New York Times (Et Tu, Toyota?) also peppered a crowd of bystanders with verbal shot. Among the wounded were the state of Michigan, the Michigan congressional delegation, U.S.-based carmakers, the farm states, the oil states… well, you get the picture. Only the Natural Resources Defense Council, which helped load the gun for Mr. Friedman, seems to have escaped perforation. We trust that Toyota, the Michigan delegation and others will defend themselves. We do, however, take issue with some of the poorly aimed shots that Mr. Friedman keeps taking at the auto industry.

For starters, there is nothing sinister about Toyota –- or anyone else — building trucks. To the unending frustration of Mr. Friedman and a handful of environmentalists, Americans buy trucks. Even with gas at $3 per gallon, Americans are buying enough midsize and full-size trucks to account for 40% of the market.

GM’s response is simple –- continue to improve the fuel efficiency of all of our vehicles, including our larger trucks. It’s why our full-size pickups are the fuel economy leaders. It’s why our new Chevy Tahoe and GMC Yukon Hybrids match the city fuel economy of a Toyota Camry. And it’s why our new crossovers –- Buick Enclave, GMC Acadia and Saturn Outlook –- are a smash hit with customers who want space for a family in a stylish, efficient package. However, just because GM is investing billions of dollars on more efficient vehicles and future breakthroughs like the electrically driven Chevy Volt doesn’t mean we should support bad environmental policy. And that is exactly what the CAFE provisions of the Senate energy bill are –- bad policy. By putting cars and truck under a single average, the bill would damage full-line carmakers and eliminate some of today’s most popular vehicles. That’s why GM, Toyota and other industry leaders are backing an alternative that would substantially raise fuel economy standards, but do so in a balanced and reasonable way. Finally, we had to chuckle at Mr. Friedman’s praise for vehicle fleets in Europe and Japan. Anyone as well-traveled as Mr. Friedman knows why European and Japanese vehicles are smaller and more fuel efficient. Fuel taxes are higher. Much higher. Given Americans’ loathing for higher taxes, it is no surprise that Mr. Friedman omits this inconvenient truth. Although GM is based in Detroit, we live and work in London, Shanghai, São Paulo and thousands of other communities around the globe. As a growing global carmaker, we understand the importance of continuing to improve efficiency, and of developing real-world alternatives to petroleum. We urge Mr. Friedman to step off his soapbox and use his gifts as a reporter to develop a deeper understanding of this complex, fast-moving and vitally important industry. Thanks for listening, and please let us know what you think. P.S. Todd Lassa at Motor Trend also had an interesting post on “Friedmanomics” yesterday. Related
CNN Money
The Good News and Bad News On U.S. Fuel-Economy Trends
Why U.S. fuel-economy standards don’t work