In this world of ever-tightening regulations, ever-dwindling derestricted highways, ever-increasing

traffic, and ever-decreasing oil reserves – there’s little room for massive conveyors of speed. They chug back gasoline and bottom out on every parking garage entrance in New York City.

But the market for superhyperexoticars is growing. Sales of Lamborghinis, Aston Martins, Ferraris, Bentleys and their ilk are at an all time high. Sure, but even so, these cars are no longer driveable in the way they’re meant to be driven. At least that’s what we say; we who aren’t able to afford a banged-up Ferrari with no engine. They’ve a place in this world, we’d all agree.

Picture this, though. A small car that can keep pace with most supercars on a track, cope admirably with city life, without the alarming price tag. Sounds good? Sure it does – I haven’t told you the bad news yet. Cars in this category, frequently labeled as track cars, are something of a compromise. You may find yourself exposed to the elements in a way only motorcyclists can understand. You will almost definitely be forced to skip the luxury features or any creature comfort, really. You may not be legally entitled to import the car into your home country. (That could be a serious one, eh?) And, to successfully import the car, you may be asked – by the manufacturer and local Customs officials – to participate in the build process.

Oh, nothing much, just locate an engine and pop it down in the, er… engine bay. You’re up for it. You earn middle-class money rather than millions of $ per year. You have a garage to store the car away from the harsh elements. When you were younger you pumped gas at the local Shell station, so that must mean mechanical skills are a part of your inbred repertoire. And you were never big on air-conditioning (runny nose? Me too.) or power windows (rolling down windows at the toll booth became your only arm exercises for the week? Me too.) or keyless entry (your wife gets ticked off when you constantly lock the car just to keep the horn honking until you enter the grocery store? Umm… oh, maybe that’s just me.)

So, here’re your options. British-owned Caterham builds the CSR you see above. Caterham bought the rights to the Lotus Seven from Colin Chapman decades ago and has building Sevenalikes ever since. There’ve been Superlights; Roadsports; and Classics, or Seven’s with a bit of added space to hold in all your extra North American girth. The CSR is the farthest-reaching example of Caterham’s performance potential – at least at this p

oint. While the car still looks like it came straight off the pitlane of Brands Hatch in the 1970’s, its performance is unbelievable. Considering its 260 horses reside in a car which weighs only 550kg, performance is quite believable. Caterham USA would charge you $44,000 for a CSR without the engine and transmission.

The Ariel Atom has been mentioned on GoodCarBadCar before. An Atom engine is typically a 220bhp Honda mill which propels this 456kg car to insane speeds in a hurry. (Remember, a typical Toyota Camry weighs approximately four times as much.) Supercharging the Ariel to 300 horsepower produces a consequent lap time equivalent to the Caterham CSR Superlight at the Bedford Autodrome’s West Circuit. 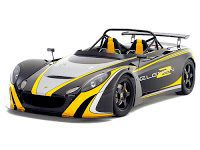 That would be a tenth ahead of Porsche’s Carrera GT and about 1.5 seconds faster than a Ferrari Enzo or MacLaren F1. To say nothing of the BMW M5, ten seconds back.

Option number three on our list is the third British contestant. Admittedly, Lotus is Malaysian-owned, but there’s little that could represent the British sports car market as quintessentially as Lotus. The 2-Eleven is yet another derivative of the Elise, one of the preeminent handlers in the world. Beyond the already exteme-for-most-buyers Elise, Exige, and Europa, the 2-Eleven carries on the principles of ‘adding lightness’ but takes the whole ethos further. I mean, just look at it. Lotus claims the power-to-weight ratio seen – or felt – in the 2-Eleven is equivalent to that of a 1960’s Formula 1 Car. 252 horsepower – meet 745 kg. Let forward motion ensue…. now. Although Lotus has always made its cars to be quick in a straight line, it has rarely completed that task by constant power updates. Rather, constant weight loss has been the name of the game. And weight loss always aids agility, and therefore cornering. The 2-Eleven’s front end eats up corners, twists, and bends and spits them out the rear, suggesting to the following car, “Try that and you’ll be in the hedge.”

Radical has been building a Le Mans-style track car (potentially legal on the road) for quite a few years now. Seen here in evo livery, the Radical can be specced in a variety of formats. There’s even been a V8. evo magazine has never tested a car quicker than the Radical SR3 1300 around the Bedford Autodrome. Both the SR3 and SR4 are powered by superbike en

gines, a telling fact in regards to the weight of this automobile. Here are Radical’s words: “For road use, the SR3’s suspension can be raised to miss even the most aggressive speed hump. A type-approval kit provides lighting, hand brake, front luggage compartment, catalytic converter and road tyres. In road trim, the SR3 is the ultimate fun sportscar, with surprising levels of comfort and practicality.Track users will be reassured by the SR3’s integral safety structure and high-strength front foot protection, which exceeds the requirements laid down in the latest UK and US regulations.” 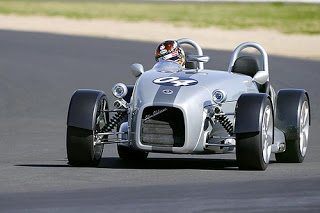 Elfin is linked to GM-owned, Australian-based Holden. That’s good news for a list that was otherwise turning into a tribute to the Union Jack. Elfin built sports cars 50 years ago and won numerous racing championships down under. Now, under the leadership of two hi

There are others; too many to touch on, in fact. Noble has had a fair bit of success with the M10 and M12 and may yet see more with the M15. Priced in a higher bracket where sports car makers must compete with cars like the Porsche Boxster, Nobles emphasize performance above all else. Noble creator, Lee Noble, was also responsible for the Ultima. The Ultima GTR is pure speed and…. not so pretty. 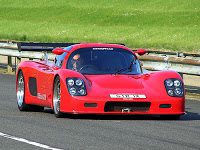 linder. Looking like it belongs in the Caterham sector, the Toniq started out as a two-student project at the University of Huddersfield with the hopes of making a Seven for the 21st century. Westfield is yet another British track car maker competing in the Seven segment. They’ve also got a car similar in theory to the Radical and have begun rebuilding the car that brought them their original success. The Lotus Eleven became the Westfield XI and is built using parts from an MG Midget. It ain’t fast but it sure is cool.

There you have it. Weigh up your options. Talk to those close to you who may have sway over your finances. Your driveway will be the most popular on the street.