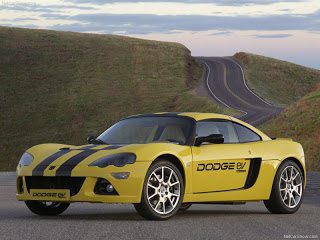 WHAT IS THE DODGE ELECTRIC VEHICLE?

Lotus is as much an engineering firm as they are a mass manufacturer of automobiles. The Elise, Exige, and Europa all stem from the same aluminum tub; not one of them contends for sales crowns in any nation.

So when Chrysler LLC comes to Lotus for engineering work, of course Lotus agrees to take on the project. You may be very familiar with some of Lotus’ work while much of it goes un-praised. For instance, as was made clear in pictures earlier this month, the Tesla Roadster is oh-so-very-much a Lotus Elise made to work with electric-power only. The weight of extra batteries forced changes that Lotus is adept at making.
Read about the Chrysler EV and Jeep EV here
As Chrysler rolls out a trio of EVs, the Dodge version is oh-so-very-much a Lotus Europa made to work with lithium-ion battery technology that should offer a range up tp 200 miles. Along with range comes extreme speed – the Dodge EV can hit 60mph in less than five seconds and travel upwards of 120mph. Thank 480 lb-ft of torque for impressive off-the-line quickness.
Around the time Tesla’s Roadster becomes a more frequent sight in wealthy communities in SoCal, Chrysler LLC wants to have 100 of these EVs in the hands of government, business, and Chrysler fleets. That’s before 2010; before the Chevrolet Volt rolls in to mass production of 10,000 units in its first year.
Tesla is asking over $100,000 USD for their Roadster. Were Dodge to build an EV just like this one, it’d be expected to cost significantly less even if Chrysler had to lose money in the process.