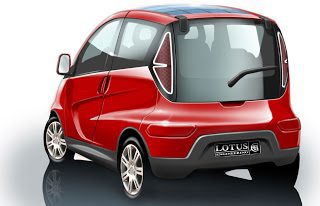 LOTUS DESIGNS THE FUTURE OF URBAN TRANSPORT CIRCA 2014

Four seats. Zero gallons of gasoline. 15 miles of range when fully amped. Characterful and cute without being overtly weird.

What vehicle are we discussing? A publication known as Automotive Engineer asked Lotus what the city car of 2014 would look like. Actually, AE wasn’t just interested in the appearance but in the vehicle as a whole. Thus, the 15 mile range; approximately twice the length of 51% of personal car journeys in the UK. Electric power is an obvious must when discussing the future of urban transport – it has been the obvious future theory for decades. Lotus’s design boss doesn’t want prospective buyers to look at their ’14 Future Car and think, “Wow”, unless the second glance is just as appreciative.

Don’t think for a second that Lotus could draw or design or say whatever they wanted in reference to this car without being accountable. Contract development is a huge part of Hethel’s business. One could easily imagine seeing this car pop up on an auto show stand in 2010 or 2011 as a Renault or Hyundai or Chrysler….. or Tesla.
If at that time one of those firms discovered that Lotus hadn’t done its homework, the sports car-maker’s reputation would be sullied. This is an accurate vision of what Lotus believes to be the future of urban transport for 2014. Will it be produced? There’s plenty of reason to doubt that. Could it be produced? Absolutely.