Toyota’s Prius, a 3-year old Volkswagen Jetta, the smart fortwo, and a Ford Focus got together in an efficiency war at Edmunds.com. The results are interesting, to say the least. Check out the Numbers below. While you’re at it, check out The Good Car Guy’s fuel economy feat in a Ford F150.

—–
2005 – model year of the turbodiesel-powered Volkswagen Jetta used in the test, a car that will soon be replaced by a new Jetta TDI that the EPA suggests will achieve even better economy
33.3 – average miles per gallon achieved in the Ford Focus, with fourth-place finishes in the backroads section, as well as in the city and on the highway
40 – average miles per gallon achieved in the smart fortwo, with a second place finish in the city (34mpg) and third place finishes on the backroads and on the highway
2 – actual finishing result for the fortwo if fuel costs are taken into account; since the Jetta TDI’s greater efficiency must still be paired with very high diesel prices 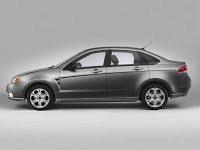 11,590 – base price, in dollars, of the smart fortwo in the USA, $2,805 cheaper than the next most-inexpensive Focus
47.3 – miles per gallon achieved by the ’05 Volkswagen Jetta TDI on backroads, best of all four vehicles
48.9 – miles per gallon achieved by the Jetta on the highway, best of all four vehicles
43.8 – average mpg achieved by the Jetta, severely curtailed by its third place finish in the city (32.6mpg), resulting in a second place finish overall
52.4 – miles per gallon achieved by the Toyota Prius in city driving, its only first place finish; but sufficient enough to heighten its average to 47.7mpg, a tidy 3.9mpg advantage over the Jetta TDI
28 – predicted combined mpg for the Ford Focus, as judged by the U.S. Environmental Protection Agency and listed at fueleconomy.gov, 5.3mpg worse than in real-life testing by Edmunds
36 – predicted combined mpg for the smart fortwo as judged by the EPA, 4mpg less than seen in Edmunds’ driving
35 – predicted combined mpg for an ’05 VW Jetta TDI, as judged by the EPA, a difference of over 8mpg compared with Edmunds’ better results
46 – predicted combined mpg for the Toyota Prius, as judged by the EPA, with just 1.7mpg separating Edmunds’ driving from the EPA’s simulator
1 – position taken by the Jetta diesel in +MPG results, accomplishing an improvement of over 8mpg beyond that believed to be possible by the EPA, followed by the Ford’s +5.3, the smart’s +4, and the Toyota’s +1.7